MENUMENU
Projects Other Projects within FPMT 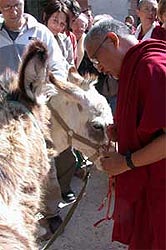 Every year around the world millions of animals die or suffer needlessly. In countries like Nepal, the care and management of animals is poor. Animal sacrifices are common. Many animals neither live pleasantly nor die peacefully.

In his concern for the welfare of all living beings, Lama Zopa Rinpoche initiated the purchase of land near Kopan Monastery to provide shelter and care for animals rescued from being killed, so that they may live out their natural lives in peace and attain a higher rebirth. The Sanctuary benefits rescued animals not only by freeing from impending death, but also by exposing them to the Buddha Dharma. They regularly hear mantras and are led around holy objects. This way they create merit and gain the opportunity to escape the lower realms. they are cared for by a manager and a veterinary assistant, with an experienced vet on call when needed.

Today, together with a growing appreciation of the importance of human rights there is a greater awareness worldwide of the need for the protection not only of the environment, but also of animals and their rights. Where there is a mind, there are feelings such as pain, pleasure and joy. No sentient being wants pain, instead all want happiness. Since we all share these feelings at some basic level, we as rational human beings have an obligation to contribute in whatever way we can to the happiness of other species and try our best to relieve their fears and sufferings.

–His Holiness the Dalai Lama

The Animal Liberation Sanctuary is managed on a day-to-day basis by Kopan Monastery and is under the direct care of Enlightenment for  Animals, a project of the FPMT. Currently there are eight cows, two sheep, and 50 goats. Most of the animals at the Sanctuary have been rescued by Lama Zopa Rinpoche.

The sanctuary has  a main animal shelter, designed to provide a healthy environment throughout Nepal’s contrasting seasons, it has facilities to separate quieter animals from the main flock, and it is designed to reduce water use and waste. The sanctuary has a quarantine area, a treatment room and there is a live-in caretaker. Internal fencing allows parts of the land to be rested from animal browsing and there are areas kept for growing food and for emergencies.

In the shelters themselves, small mp3 players are placed which play mantras when the animals are inside at night. Additionally, every morning a monk from Kopan recites prayers to the animals while they eat.

The sanctuary was established to care for animals primarily rescued by Lama Zopa Rinpoche. There is currently no room for people to bring other animals. While people cannot bring new animals, the existing animals do need your help. The costs of caring for the animals is very high (food, shelter, veterinary care and staffing costs).

The late Khensur Rinpoche Lama Lhundrup explained that the merit of supporting liberated animals is the same as liberating an animal yourself, for without ongoing care and shelter the animals would not survive.

Animals cannot speak out for themselves – they depend on people to care , to help them.  Please give your support to rescue animals from a cruel and painful death and to provide a sanctuary where they can live and die with the proper care and love they deserve.

Contribute to the Animal Liberation Sanctuary

Without the practice of morality, there’s no enlightenment, no liberation from samsara, not even good rebirths in future lives.