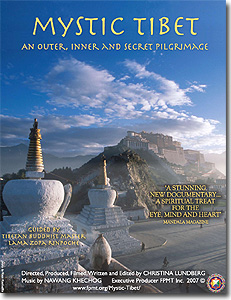 In 2002, a group of exceptional people from around the world signed up to explore the country that is home of the Dalai Lamas. But this was no common tourist trek. Guided by the renowned Tibetan Buddhist master Lama Zopa Rinpoche, the pilgrims found themselves engaged in a rare and powerful experience – one in which the realms of great yogis and saints were revealed and personal transformation beckoned closer each day on the trail.

This intense journey takes one directly into the culture of Tibet and its arresting, spiritually-rich landscape in a way that is not often seen.

The pilgrimage was led by the Tibetan master Lama Zopa Rinpoche, who was a native of Nepal and moved to Tibet to study Tibetan Buddhism as a child. Along with many other monks, he was forced to leave Tibet in 1959. He and his teacher, Lama Yeshe, founded the Kopan Monastery in the Katmandu Valley.  Later they developed the Foundation for the Preservation of the Mahayana Tradition, currently one of the leading Tibetan Buddhist foundations in the world with over 140 centers located in 31 countries.

Lama Zopa Rinpoche approached the pilgrimage as something much more than a normal excursion:

Normally when people go on pilgrimage, they are just like tourists; maybe they take some pictures, and that’s it. They don’t use the places to collect merit or to meditate or to get some benefit for their minds. If it’s just like sightseeing, then it won’t be of that much benefit.

With a profound well of knowledge and direct understanding of the qualities of the holy Buddhist objects and their sacred locations in Tibet, Lama Zopa was able to transform the trip into a spiritual pilgrimage of merit and benefit for the pilgrims involved, as well as for the viewers of the documentary. Lama Zopa expertly supported the conditions for transformative personal experience by leading the pilgrims to many extraordinary locations so precious to the spiritual heritage of Tibet.

These sights included the meditation caves of great masters such as Pabongka Rinpoche, Lama Tsongkhapa, and Milarepa. Other sacred sites included Ganden Monastery and the famous sacred residence of His Holiness the Dalai Lama, the Potala Palace in Lhasa.

At each site, Lama Zopa Rinpoche performed Buddhist ceremonies, bringing the sacred sites and the holy images alive in the moment. This dramatic experience is beautifully translated to the viewer through the eye of the camera and captured in thoughtfully-edited interviews with the participants.

Mandala Magazine (see Reviews) described the impact of this documentary on the viewer in the following statement:

Mystic Tibet vividly captures the grandeur and mystery of this life-changing journey. One feels intimately a part of the experience, seeing these holy objects that seem to live and breathe, enduring the hardships and receiving the blessings right along with the pilgrims.

A pilgrimage such as this is extremely rare, as it is very difficult to gain access to Tibet and its holy sights under the current political regime. The knowledge and wisdom of a spiritual master such as Lama Zopa Rinpoche only magnifies the rarity and power of such a precious experience.

As one pilgrim stated,

A pilgrimage with Rinpoche is not sightseeing. It’s like heart-seeing.

In Mystic Tibet, the viewer can share this experience directly with the hearty pilgrims of this transformative documentary.

Anybody who dedicates their life to achieving lam rim realizations with the goal to liberate numberless beings from the oceans of samsaric suffering and to bring to enlightenment, this is what I regard as the most important thing in the world.