Recent live webcasts of Rinpoche teaching in Asia are available to watch anytime on Livestream.

Recently, two FPMT centers wrote to offer Rinpoche their special practices during the Monlam period, which students had dedicated to Rinpoche’s health and long life, among other extensive dedications. Rinpoche replied:

“Thank you 10 times for so kindly offering this; it is a pity I am so useless, but I do try to benefit some ants and did in Washington retreat place during the snow time. Also try to help the cockroaches. And maybe next life those creatures will come back with rucksacks to the Kopan Course. Also go to Lawudo … and then eventually get enlightened … he he he, ha ha ha, ho ho ho!

Anyway I really appreciate all your efforts!
With love and prayers,
Lama Zopa”

“Zillion million thanks for the retreat and mantras you all did! Very, very kind; I pray to be a little benefit at least to sentient beings – the ants and cockroaches and many other little and big sentient beings.
With much love and prayers
Lama Zopa”

Please contact the hosts directly for any questions regarding the event.

Subscribe to our RSS feed on Rinpoche’s Schedule to receive updates automatically as soon as they are available!

New Video from Life on the Road with Lama Zopa Rinpoche

While traveling from Taipei to Kaoshung, Taiwan recently, Lama Zopa Rinpoche had a very late dinner at a food court. Ven. Roger writes in his occasional and wonderful blog “Life on the Road with Lama Zopa Rinpoche”:

“Rinpoche then mentioned with a mixture of sadness and compassion, ‘When you don’t think of the next life, people are wandering, like in a dream, believing 100% the dream is real! Like in an illusion or mirage – believing it’s all real.'”

Here’s a video from that night of Rinpoche discussing karma at the food court.

We invite you to rejoice with us as you read our 2012 annual review entitled FPMT Annual Review 2012: Nothing More Important than Helping Others.

“Identifying this year’s theme for our Annual Review was fairly straightforward. All we had to do was look at Lama Zopa Rinpoche’s activities and advice from 2012 and it became clear that nothing is more important to Rinpoche, and thus the entire FPMT organization, than helping others.

It is in Rinpoche’s shadow that we offer, ‘FPMT 2012: Nothing More Important than Helping Others’ as the title and organizing theme for this year’s Annual Review. All of us here at Lama Zopa Rinpoche’s International Office present you with this collection of accomplishments and highlights, with our strong wish that it becomes the cause for all of us to take to heart Rinpoche’s advice and learn that nothing is more important than helping others.”

It is available now to read online as an e-zine or downloadable PDF.

We will be mailing printed copies to FPMT centers, projects and services soon.

On February 15, Nalanda Monastery in France held a graduation ceremony for its first five-year residential Basic Program (BP) students. Geshe Jamphel, BP teacher and Nalanda’s abbot, handed out BP completion certificates to the graduates, and BP completion cards to students who did not yet fully graduate. The ceremony was an inspiration for the 36 brand new students of Nalanda’s second Basic Program, who attended as part of their introduction day. The ceremony was followed by a big celebratory lunch. Two of these graduates are now FPMT registered teachers! 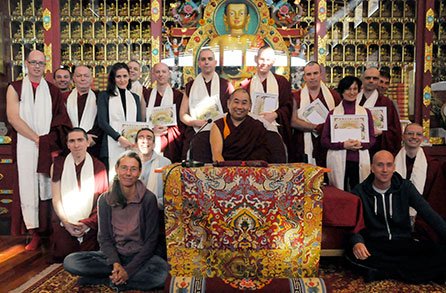 New Issue of Mandala Out Now!

The April-June 2013 issue of Mandala magazine has just been published, and it’s an issue not to be missed! In it, we explore the path of pilgrimage, including valuable advice from Lama Zopa Rinpoche; gorgeous photos of pilgrimage sites in Tibet, China, India and Nepal; and personal stories from FPMT students and teachers. Also in this issue, a rich assembly of articles and news from the education programs, centers, projects and services around the world that comprise the FPMT mandala. If you aren’t already receiving Mandala, it’s not too late to get a copy. By signing up now to become a Friend of FPMT at the Basic level or higher, we will send you this issue as well as an email with a link to the electronic version, which you can read right away. For more, visit us online at fpmt.org/mandala.

Become a Friend of FPMT and stay connected to all the FPMT has to offer including the FPMT Online Learning Center, Mandala Publications and many complimentary resources offered at the free FPMT Membership level.

Justin has joined the International Office team as Donor Services Coordinator, taking over from Trevor Fenwick, who has resigned. Justin is a graduate of Naropa University where he received his B.A. in Religious Studies as well as Maitripa College where he received an M.A. in Buddhist Studies.

For Center, Project and Service Directors,
SPCs, Teachers and Board Members:

(This advice is specifically for those offering service in the roles listed above.)

I hope you found our recent update regarding FPMT Teacher Policy and the teacher registration process helpful! We received some lovely feedback from centers and FPMT registered teachers to share:

“For our center, I think the new policy has been great! Setting up a relatively clear path to becoming a teacher has really motivated some of our members to study harder and more seriously!”

“It’s such an honor to be able to teach for Rinpoche’s and Lama’s organization. I’m so grateful.”

“I always have a good experience in the centers and I’m so impressed how much time and effort the people in centers put into making the program and attending the program. Things have absolutely improved. Now there seems to be a joy when offering service, which was missing quite often in the past.”

Needed! A project manager for the stupa to protect from harm in California, USA and a treasurer for Foundation for Developing Compassion and Wisdom, UK. Milarepa Center, Vermont, USA has four work-study positions available.

Please check out these and other exciting opportunities to offer service as a volunteer or as paid staff in FPMT centers, projects and services around the world!