If you received this from someone else, or unformatted, click here to
connect with your FPMT family.

Rinpoche’s Schedule
To find more information as it becomes available, and for details of how to contact the center and register for these events, please go to Rinpoche’s Schedule. We have recently updated this webpage to be even easier for you to use! 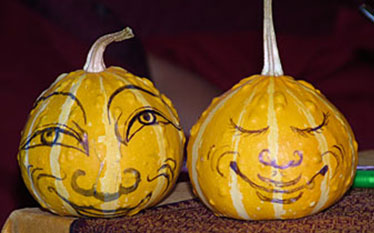 When you encounter difficulties – when your child does not listen to you, when you cannot control him, when you have a job and many things to do, and you become disappointed and parenting becomes very difficult for you – then it is good to rejoice thinking: “My life is beneficial for at least one sentient being; my limbs are beneficial for the happiness of this one sentient being.” If you can rejoice like this, there will be no difficulties in your mind or in your heart. With this positive wish to help your child, the thought of being annoyed at or exhausted by your child will not arise…

Because parents spend so much time with their child, they have incredible influence on him or her… If they don’t have a clear idea about how to direct a child’s life in a positive way, then the child’s future will not be clear. In that case their having become parents will be a great loss. While many good things could have happened to the child, because the parents did not have a clear idea about parenting, the child’s whole life can turn into one of suffering and problems…

The conclusion is that even if a child can simply develop the first of these seven qualities [kindness, delight, patience, contentment, forgiveness, humility and courage], kindness, with everyone he or she meets, the effect on other people will be amazing. Each time that the child does something positive, then however much the parents suffered for that child, it will all become worthwhile… Therefore, my conclusion is that if a child is brought up with a clear plan for his or her life to be beneficial to sentient beings (or at least to this world, the country, the neighbors, the surrounding people and the family), due to which he or she practiced a good heart and refrained from harming others, or even just practiced the first guideline, kindness, then each time the child does this, however many years the parents spent worrying and suffering, it all becomes worthwhile…

So you have an incredible opportunity to help your children. In this way not only are you helping them in terms of this life, but you are helping them create the causes to experience happiness in life after life. In addition, you are bringing them closer to liberation and enlightenment. Isn’t that just amazing? I have used the benefits of doing just one prostration as an example but there are other things you can teach your children…

Excerpted from a compilation of teachings titled Planned Parenting: How to Make Having Children Meaningful from the Lama Yeshe Wisdom Archive. Originally transcribed, compiled, and edited by Joan Nicell and Jon Landaw from Rinpoche’s teachings on May 15th and 23rd, 2009, at the 100 Million Mani Retreat at Institut Vajra Yogini, Lavaur, France.

International Office News
Friends of FPMT is a program composed of students and donors working together to support the global efforts of the Foundation for the Preservation of the Mahayana Tradition (FPMT).

The program has been restructured to truly support the Buddhist education of the FPMT community while they work with other Friends toward a larger goal: making this world a better place.

The new Friends of FPMT program has four levels to choose from (including one free option), each represented by one of the Four Harmonious Friends.

Discovering Buddhism Online: Five modules are now online with three more going live in November. Don’t forget Module How to Meditate, is free. Check it out!

Light of the Path: During a very productive work retreat with six core FPMT teachers, the first six modules of the Light of the Path online program were created, using the audio and video recordings from the LOP retreat with Rinpoche. The program will go live in December. Following the launch, the modules will be supplemented with teachings from Lama Yeshe on the first six topics.

NEW! Direct and Unmistaken Method: Previously published by Lama Yeshe Wisdom Archive, this new and revised edition contains the Eight Mahayana Precepts ceremony with commentary by Lama Zopa Rinpoche. Rinpoche reminded the Light of the Path retreatants about this passage from the King of Concentration Sutra: “For ten billion eons equaling the number of sand grains in the Pacific Ocean, if one offers umbrellas, flags, garlands of light offerings, food and drink with a calm mind, or offers service to one hundred billion times ten million Buddhas. When the holy Dharma has become extremely perished and the teachings of the Gone to Bliss One has stopped, if somebody who is enjoying (living in) one vow for one day or night, this merit is particularly exalted than having made all those offerings.”

NEW! Rituals and Realization, A Users Guide to Tibetan Buddhist Practices: This book begins with the inspiring and clear teachings given by Khenrinpoche Lama Lhundrup on why we need ritual in our lives, followed with an introduction by Ven. Sarah Thresher on the elements of ritual practice and Lama Zopa Rinpoche’s particular style of doing the rituals. Each practice in the book (all found in Essential Buddhist Prayers Vol. 2) begins with a teaching from Lama Zopa Rinpoche on the benefits of the practice, followed by a teaching section on how to lead the practice from Ven. Sarah, and finally the practice itself. There are several appendices, including a teaching on the vajra and bell, visualizations and motivations given by Lama Zopa Rinpoche, a list of helpful resources, and the contributors’ biographies. Indispensable for anyone wishing to practice these pujas according to the method of Lama Zopa Rinpoche.

Coming Soon: Just completed and at the printers – The Preliminary Practice of Tsa-Tsa –translated and with additions and instructions from Lama Zopa Rinpoche. Includes the actual practice, commentary, personal stories from tsa-tsa makers, and practical advice on materials and the process. A must for anyone intending to do a tsa-tsa preliminary

For Center Directors, SPCs and Teachers
CPMT 2009 Updates
At the first of his presentations at CPMT 2009, Rinpoche said:

The purpose for this organization to exist is that. The result, the effect for sentient beings, the benefit of this organization is like limitless sky, because it is Dharma, and complete Dharma.” (Day 1, April 26, 2009).

One of the innumerable ways in which Rinpoche is personally taking responsibility for that is to sponsor the rare collection of initiations which His Holiness Sakya Trizin is giving annually at his seat in Dehradun, at Rinpoche’s request. And we can make a personal contribution to the task by making a simple donation (see Ven. Roger’s account of the event in “Preserving the Mahayana,” below).

At the CPMT, in his update on the organization, Ven. Roger had spoken about Rinpoche’s strong interest in giving consecutive teachings, and said that the FPMT community is committed to supporting Rinpoche and to providing all the conditions for Rinpoche’s wish to be fulfilled. We have seen how Kadampa Center, together with students and teachers from around the FPMT world, made the first year of the Light of the Path teachings a resounding success. At the start of 2010, we will see Rinpoche giving the second year of his commentaries on the Ganden Lha Gyalma and Lama Chöpa at Amitabha Budddhist Centre in Singapore Potowa Center in Jakarta, Indonesia.

Drawing from the experience gained at the Mani Retreat (which followed the CPMT in Lavaur, France), and the Light of the Path in North Carolina, International Office will try to work with the same audio-visual team and the local centers to produce the highest possible standard of recording for Rinpoche’s precious teachings. We will be taking Rinpoche’s advice to preserve and spread the Dharma by ensuring that Rinpoche’s own teachings will be available to all the students who cannot be present personally, and all the future students to come. But by attending the teachings, you will have the unique benefit of receiving the lineage directly – so do give it some thought!

Preserving the Wangya Norbu Tangwa has become a matter of urgency as the lineage of some of the initiations had already died out in the Gelug tradition. Initially, Rinpoche with other Gelug Lamas, including Kirti Tsenshab Rinpoche, received the first half of these initiations from His Eminence Chobgye Trichen Rinpoche in 1991, but age and poor health stopped him from giving the transmissions in their entirety.

While being the main sponsor of the current event in Dehradun, Lama Zopa Rinpoche covers all its associated expenses. On top of that, Rinpoche is offering breakfast, lunch and dinner to all the Sangha for the duration of the initiations.

If anyone would like to make an offering towards this seminal and meritorious event, please go here:


You can ‘circumambulate’ the Tara statue or at least, get a 360 degree view of it on YouTube.
16 Guidelines gets Nod from U.K. Press
Alison Murdoch, Director of FDCW (Foundation for Developing Compassion and Wisdom) recently sent this note:

“…just to let you know that we got some nice coverage in the UK national The Guardian last week, and then in the international Guardian Weekly dated October 23, 2009:

‘The challenge…is to find a way to articulate a common set of ethical guidelines on which both believer and non-believer can stand. Plenty of schools already struggle to do just that, outposts beleaguered by a hostile culture. One handbook used in British schools does it brilliantly: 16 Guidelines for Life starts with such counter-cultural values as humility, patience and contentment and concludes with service and courage. We’ve reached a sorry state that this handbook should sound so necessary, and so startlingly radical.’” (Bunting, Madeline. “Our speechless outrage demands a new language of the common good”, The Guardian, October 19, 2009.)

Find out more about the 16 Guidelines and FDCW’s phenomenal strides in creating training to help people everywhere develop their innate wisdom and compassion.

animals were touched on their heads by a holy object and led to circumambulate a stupa. The event even drew the attention of the BBC.

The practice of blessing animals is explained by Rinpoche: “The purpose of this is to bring peace to the animals and to make their lives meaningful, so that sooner or later they can be fully awakened and achieve highest happiness.”

Opportunities to Offer Service in FPMT
Tushita Meditation Centre, Dharamsala, India is looking for volunteers for several positions, including help to do multi-media recording at the Hayagriva Retreat to be led by Rinpoche in March 2010.

Keep checking for exciting opportunities to offer service in FPMT centers around the world.

There is no samsaric pleasure that is new, so let go of the clinging that creates samsara.