Lama Zopa Rinpoche News is usually updated at the end of each month. To view previous newsletters, please visit the News Archives. 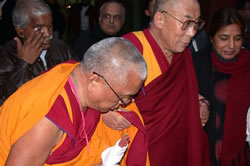 (For the confirmed schedule and details of how to book for these events, please contact the center directly or go to https://fpmt.org/teachers/zopa/schedule/)

Rinpoche is currently at Potowa Centre in Jakarta, Indonesia, teaching and giving Medicine Buddha and Vajrasattva initiations there.

Rinpoche then goes briefly to Amitabha Buddhist Center, Singapore, for a teaching and to attend their fundraising dinner for the new center building.

Next stop is Cham Tse Ling, Hongkong, Jan 13 – Feb 1st. Rinpoche will give Lion-Faced Dakini and a long life initiation, and will teach on Lama Tsongkhapa Guru Yoga.

Rinpoche then goes to Shakyamuni Center, Taiwan, from Feb 4 – 8th, to give teachings and Great Medicine Buddha initiation.

Rinpoche will then visit Naropa Centre, Tahiti for teachings on the 7 Point Mind Training, and to give Mitrugpa, Milarepa, Tara and Medicine Buddha initiations between March 10 – 17th.

Then Rinpoche will teach at Dorje Chang Institute in New Zealand between March 19 – April 4th, on the Foundations of all Good Qualities, and will give Amitabha and Great Medicine Buddha initiations.

Next is the Mahamudra retreat hosted by Buddha House, Australia between April 9 – May 4th. Rinpoche will give the Gyalwa Gyatso initiation at the beginning of the retreat. According to Rinpoche’s plans for this retreat, this will be an excellent opportunity for those who want to really understand meditation practice.

Then Rinpoche will teach and give Great Medicine Buddha initiation at Maitreya Instituut before CPMT 2004, August 27 – Sept 1st., and will give 21 Tara initiation during CPMT.

Rinpoche will lead another long retreat – on Ganden Lha Gyema at Istituto Lama Tzong Khapa in Italy between Sept 3 – 30th. This will begin with Rinpoche giving Yamantaka initiation on September 4 and 5th.

Lama is doing well at school, he feels it is helping in many ways. Lama is watching Lama Yeshe videos and reading Bliss of Inner Fire.

THE PASSING OF ONE OF RINPOCHE’S GURUS

Venerable Bakula Rinpoche had a very inspiring life, born the maharaja of Kashmir, he then became a minister in the Indian government and the Indian ambassador to Mongolia. Bakula Rinpoche’s nephew is a high lama, his brother a great Hindu yogi who is nearly 100 years old.

Bakula Rinpoche himself was a very learned lama and the incarnation of one of the 16 Arhants called Bakula.

‘Bakula Rinpoche passed away on the 4th of November. His passing was sudden as he was doing fairly well after he was discharged from the hospital.

We were fortunate to have Rizong Rinpoche with us those difficult days and so it was a great support to handle the situation.

The funeral was in Ladakh. There were some amazing signs during and after the funeral, which pleased all the Rinpoches and people present. It was a clear and sunny sky the day we were collecting the ashes. A small cloud appeared just over the place, which is a mountain top, and we saw a thick snow fall. It was a brief spell but covered the people present there white! It snowed only in that spot and nowhere else. It was as if the heavens were showering flowers!

The same evening a mongoose (the symbol of Bakula arhat) was seen below Rinpoche’s seat in the courtyard of Pethub monastery. It is the same animal which Arhat Bakula carries in his hands and which you see in thangkas. It was strange as never before the monks had seen the animal anywhere around. Rizong Rinpoche also saw the animal and was very pleased.’

And from the Indian press:

‘Officials from the Prime Minister’s office and the State Government dropped in to offer condolences. A three-day State mourning has already been declared in Jammu and Kashmir. Leh will mourn for a much longer period. Perhaps it will always feel the absence of one of its most distinguished sons who was also its most revered religious and political face.’

(There will be more information and pictures in the April edition of Mandala magazine.)

Rinpoche said that you cannot put any tsa tsa or any holy object that is damaged inside stupas. Rinpoche said by doing this it affects the minds of people who circumambulate the stupa.

Rinpoche advised that we should put damaged holy objects only in tsa tsa houses, and definitely not in stupas or statues.

RINPOCHE ABOUT SERVICE AND CHANGE

‘I hope you are very well and enjoying and rejoicing in your service to others, I greatly appreciate this from you, it is very important …helping others and at the same time it is great practice, essence of Dharma is bodhicitta, essence of Mahayana.

I would like to suggest you have some change, anyway change is always happening, so it is good to accept impermanence, much more comfortable this way and no surprises.’

Some numbers to rejoice in – there are in Rinpoche’s room (so far…as we are really only half way through):

And go to https://fpmt.org/teachers/zopa/gallery/ to see the following photos:

a. Rinpoche wishing Merry Christmas to the Kopan animals – blessing with many, many mantras, the monks were all a bit blown away!

Ven Roger says – ‘we had to set up the speaker/sound system (you can see one of the big boxes near Rinpoche in the pic). Now the animals are very happy…they were a little sad as they couldn’t go on holidays!’

b. Ven Roger says: ‘While Rinpoche was in Bodhgaya, Rinpoche met with the Karmapa (He was so into Maitreya and so supportive and very relaxed),
the incarnations of Dilgo Khyentse Rinpoche (although only 10, big and like an old man – ‘as He was’ says Rinpoche), Bolkar Rinpoche and Kalu Rinpoche…….such a great meeting with the different traditions coming to pray for Maitreya project.’

Rinpoche says about this teaching:

“…Milarepa’s life story moves anyone who reads it and blesses their mind. So the mind gets so inspired, (with) so much courage, strength to practice dharma – able to overcome all difficulties.”

In this concise and inspiring teaching on Jetsun Milarepa Lama Zopa Rinpoche emphasizes the importance of depending on Dharma to overcome all problems in life. Depression, suicidal thoughts, personal and business relationship difficulties can be stopped. Highlighting the positive attitude of loving kindness and thinking on impermanence, Lama Zopa Rinpoche presents the essential practices to transform your mind and create the causes of happiness and enlightenment.

Lama Zopa tells how the famous 11th century Tibetan meditator, Jetsun Milarepa, generated a special bodhicitta thought to benefit all sentient beings and promised that just by thinking and saying his name, blessings will be received.

Combining the blessings of Milarepa and Lama Zopa Rinpoche, this teaching presents the method and wisdom of how to free the mind bound by worries and attachment – how to transform your mind by practicing Dharma.

Good human qualities… honesty, sincerity, a good heart, cannot be bought with money, nor can they be produced by machines, but only by the mind itself. We call this the inner light, or God’s blessing, or human quality. This is the essence of mankind.