Offering Meals to the Monks of Sera Je Monastery Since 1991

A Brief Introduction • History of the Food Fund • Why a Food Fund? • Benefits of Donating • What Will My Donation Be Used For? • News • Photos • Videos •Donate Now

May 2017 Update: The Completion of the Sera Je Food Fund & A New Chapter in Supporting Sangha

For the last ten years FPMT International Office has been working to build up an endowment fund large enough to support the long-term health of the Sera Je Food Fund, whereby the interest from the endowment would cover the annual costs associated with offering three nutritious meals daily for all the monks of Sera Je Monastery, for as long as the endowment remains.

In January 2017 we raised the targeted amount needed for the endowment. This means that the Sera Je Food Fund is now self-sustainable and can be run from the interest of this endowment. This is an incredible achievement. Thank you for your part in actualizing this.

Sera Je Monastery is now managing the endowment and the ongoing management of the food fund. Therefore the Sera Je Food Fund is now closed as an FPMT charitable project.

Supporting monks and nuns is one of the highest priorities for Lama Zopa Rinpoche and the FPMT organization, because the preservation of the Buddhadharma is dependent on the existence of Sangha.

We invite you to join us in developing the Supporting Ordained Sangha Fund which is offering support to monasteries, nunneries, and individual monks and nuns for food, accommodation, health care and education. This fund is not limited to any one institution and able to benefit many nunneries, monasteries and Sangha in need.

Please watch this video of Lama Zopa Rinpoche thanking those who have supported the Sera Je Food Fund over twenty-seven years. In this message, Rinpoche explains the vast benefits of offering food to Sangha.

The Sera Je Food Fund provided three nutritious meals daily to the monks living at Sera Je Monastery in southern India for twenty-six years. This service provided one of the most fundamental needs for life – food – and allows the monks to focus on their studies without the burden of sourcing and preparing their own meals.

The Great Yogi Milarepa said: “The practitioner and benefactor offering food create the cause to achieve enlightenment together.”

The Sera Je Food Fund has offered millions of meals since 1991. At the time of this fund becoming self-sufficient it was offering approximately 700,000 meals per year, 2,900 meals per day and the annual cost was US$200,000.

A short film on the Sera Je Food Fund featuring Lama Zopa Rinpoche is available. In this video Rinpoche candidly speaks on the importance of supporting the food fund and the role it plays in spreading the Dharma in our world. Scenes from daily life at the monastery, including the logistics of preparing meals for all the resident monks at a time.

More videos about the Sera Je Food Fund can be found here!

What Does Offering Food Cost? 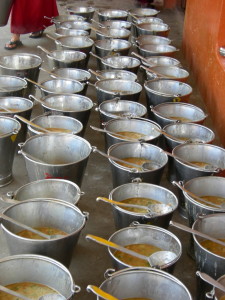 Every day, three meals are prepared for all Sera Je monks.

This is a typical day’s menu for the monks at Sera Je Monastery.

Photo gallery of daily breakfast offered to the monks by the Sera Je Food Fund.

Photo gallery of seven days of lunch offered to the monks by the Sera Je Food Fund.

Photo gallery of seven days of dinner offered to all monks by the Sera Je Food Fund.

See details of what it takes to offer food through the Sera Je Food Fund every month and how a community of monks help serve one another. 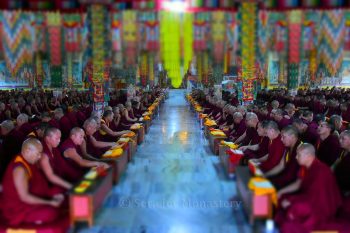 An Update and Incredible Achievement from the Sera Je Food Fund

In 2017, after twenty-six years of the Sera Je Food Fund offering daily meals to all of the 2,500 monks of Sera Je Monastery, FPMT Charitable Projects raised and then offered a US$5.3 million endowment fund to Sera Je Monastery. …

read all the news »

History of the Food Fund 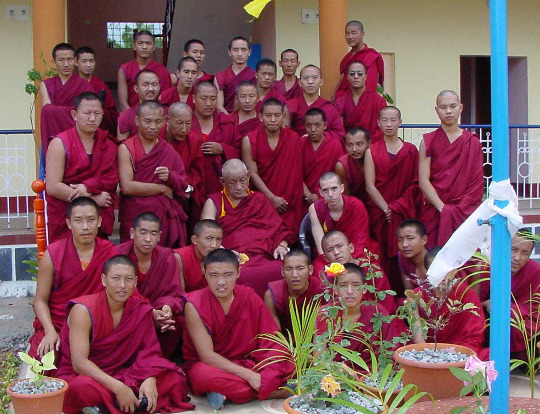 Tenzin Ösel Hita with the monks at Sera Je Monastery.

The Sera Je Food Fund began in 1991 when Tenzin Ösel Hita, the reincarnation of Lama Yeshe, entered Sera Je Monastery in southern India at age six. It is customary for a monk’s sponsor to make offerings to all Sangha on the day of officially entering the monastery and Lama Zopa Rinpoche wanted the offering to be of the greatest practical benefit to the monastery itself. After discussion with the abbot of Sera Je Monastery, it was determined that the most beneficial offering would be to create a food fund whereby all of the monks at Sera Je Monastery could be offered quality meals for free. Out of his incredible compassion, Lama Zopa Rinpoche was not simply offering lunch on the day of Lama Osel Rinpoche’s entrance to the monastery but, without precedent, taking on the responsibility of providing meals to every monk at Sera Je for the rest of their lives. More on the history of the Sera Je Food Fund….

Why a Food Fund? 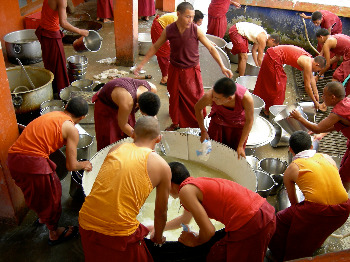 In the Tibetan tradition, it is customary for monastics to support themselves. In addition to providing for their own housing, individual monks are responsible for purchasing and preparing all of their meals. As many of the monks are refugees from Tibet or from refugee families living in India, they have very little money for quality food and, consequently, were often malnourished and ill. Before the Sera Je Food Fund, most monks at the monastery never had a full stomach. Now, for the first time, they are well-nourished, and this makes a dramatic difference in the energy they are able to devote to their studies. Additionally, group preparation of meals and use of a communal kitchen allows more time for the monks to apply themselves to their studies without the added worry of cleaning up and preparing individual meals, monitoring their individual health for adequate protein and nutrition, etc.

Benefits of Donating to the Sera Je Food Fund

Taking responsibility for supporting these practitioners is extremely worthwhile because they are preserving and spreading the entire teaching of the Buddha. 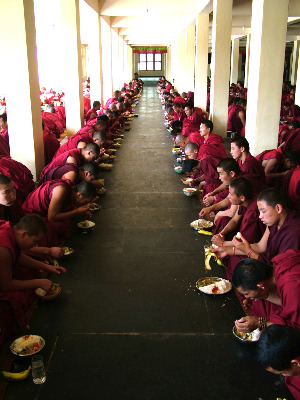 “If you offer with the recognition that they are the guru’s pores,” Lama Zopa Rinpoche said in 2011, “then that is an unbelievable way to collect merit. When you offer to many Sangha who have the same guru, then you are making offerings to that many pores of the guru. This is the easiest way to collect skies of merit by offering. By offering even just one candy or flowers or even one grain of rice to a statue of Buddha or even a visualized Buddha, you collect skies of merit. It is much more powerful than offering to the Three Jewels (Buddha, Dharma, Sangha) as well as all the statues, stupas and scriptures existing in all directions, so there is no question if really offering to the same guru’s disciple. These benefits should be understood so that when you make offerings to the guru’s pores that you think correctly. This is the best business.”

There are extensive prayers and dedications made by the monks at Sera Je for those who contribute to the fund. These dedications will continue to generate merit for those donating to the fund for as long as the monastery exists. 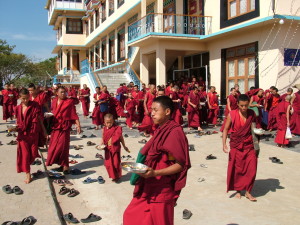 On behalf of Lama Zopa Rinpoche, we would like to offer our heartfelt gratitude to all of the kind benefactors who have been contributing to this project over the years and supporting Lama Zopa Rinpoche’s vision.

Please rejoice in twenty-six years of offering food to the monks at Sera Je Monastery.

We invite you to take a moment to rejoice in this incredible offering, the benefits of which will continue long into the future. Every person who has contributed to the Sera Je Food Fund — whether with donations, time, or prayers — all of this incredible merit of offering to the Sangha will continue to grow and benefit.

Or simply send your check in US dollars payable to FPMT Inc. and write “Sera Je Food Fund” on the memo line.

The Sera Je Food Fund is a project of FPMT Inc. and is administered by FPMT International Office located in Portland, Oregon, United States. All donations made to this fund are tax-deductible within the United States in accordance with IRS Code article 501(c)(3) to the extent allowed by law.

When you recognize your problem comes from your concept or your concept is the problem, you don’t blame others.