“When we were young together, I had no idea of what was going to happen. No one ever dreamed that things would turn out as they did. But it happened.”

Lama Yeshe was thirteen and I was sixteen when we first began studying together in the same class at Sera. We knew each other in class at that time but were not yet friends outside of class. Lama Yeshe was known for his humility and his loving mind towards others, even then. Lama lived at that time (and until he had to flee from Tibet) with his uncle, who was his gegen (teacher). Who provided him with food and clothing and instructions about the monastery. 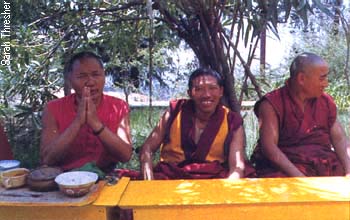 Sometimes monks who were very good students were given the very special privilege of debating in front of the entire assembly of Sera monks. The monastery chooses the subject that one must debate. But one can decline if one so wishes. When Lama was still quite young, he was honored with this opportunity, and was given a particular chapter about Maitreyanath to debate on. There is said to be something very auspicious for the monk who receives this debate subject, since it concerns the coming Buddha. But Lama Yeshe declined to debate this time.

Lama Yeshe and I studied in exactly the same way (the same texts, etc.) until we both had to flee Tibet. The only difference was that we had different teachers. According to the monastery rules, monks are not allowed to go and listen to teachings in places other than in their own classes. Nevertheless, Lama Yeshe sometimes went to listen to other teachings anyway.

Lama Yeshe especially enjoyed reading the verses and songs written by great yogis about their experiences. Lama, another monk named Jampa Thinley (who is now dead), and I were very good friends by this time. Lama would go into Jampa Thinley’s room and lock the door and read the songs of great meditators, or their biographies. He and Jampa Thinley would open the door only for me, not for anyone else.

When we were together in the class on Paramita (Abhisamayalankara). Lama Yeshe and I both developed huge sores like carbuncles on our cheeks. Very painful. But we both went to debate anyway. At this time Lama Yeshe had to take the position as the respondent (the debater who is seated). When he would become excited and answer loudly during the debate, his boil would burst open, and pus would spurt out, and Lama would cry from the pain. Sometimes we would lament our sickness together, and start to cry about our bad karma, since no one else had unbelievably painful boils like we had. The doctors could not cure them at all with their medicine. Then we met one monk called Ate. He used mantras, reciting and blowing on our cheeks. He cured our sores in just a few days. When he would be treating us and saying mantras and blowing, our minds would feel very happy and we would feel a certain coolness from his breath.

One time, Lama Yeshe had the idea to make two debating groups among our friends. We could practice debating together, and we could exchange positions, one group posing questions and the other responding, then vice versa the next time. Lama Yeshe could not even stop long enough between our debating sessions to eat something. One time I was the respondent and Lama Yeshe was the questioner, and he won. He jumped on my shoulders and tumbled over my head exclaiming. ‘Now I am going to give you the vase initiation!’

When we fled into exile in India, we traveled very close to one another. We came from south Tibet through Bhutan and into India. Lama Yeshe fled Tibet with the Sakya lama who was at that time holding the Sakya lineage called the ‘Palace of Auspiciousness.’ Lama Yeshe told the border police when he arrived in India that he too was a Sakya monk. That is why in his Indian IC it was written that he was a Sakya lama. Soon after reaching India, this Sakya lama went to America. I think that maybe he recommended to Lama Yeshe to go to America too.

Lama Yeshe ended up in Buxa camp, as did I. There were many Sera monks there, as well as some monks from Drepung. Most monks had left Tibet wearing a chuba instead of their monks’ robes, and they still only had their chubas to wear in Buxa. Lama Yeshe was a very wrathful debater, with his chuba sleeves tied around his waist! We had begun our practice of debate again in Buxa. Lama Yeshe spent about seven years in Buxa in all.

In Buxa, our debating sessions began at 9am. Lama was always late, or else he sometimes did not show up at all. This was because Lama Yeshe was sleeping. Why was Lama sleeping so late in the morning? Because he didn’t sleep during the night. What was he doing all night long? Lama Yeshe was studying English. However, if you asked him what he was doing all night long, he would answer ‘Nothing.’ If you unexpectedly walked in and caught him reading his English book, he would quickly try to hide it under his pillow, or behind him. Many of his classmates, when they found out what he was doing, scolded him, saying, ‘Why learn English? What are you doing that for?’ They suggested that he learn Hindi instead. Actually, he also studied Hindi.

After about two years in Buxa, Lama Yeshe met Lama Zopa Rinpoche. Chompel (the cook at Kopan) was in the same class as Lama Zopa, and was the one who introduced Rinpoche to Lama Yeshe. The first time Chompel took Lama Zopa to see Lama Yeshe, Lama Zopa went with empty hands; he forgot to bring an offering. (Now Rinpoche wonders if by that action of negative karma he didn’t create the cause not to receive many teachings from Lama Yeshe in this lifetime.)

In 1967 Lama Yeshe and Lama Zopa went for a trip to Darjeeling, where Lama studied Tibetan astrology, grammar and poetry. Lama Yeshe went to Darjeeling several times during this time, and it was on one of their later journeys there that they met Zina, and she requested them to give dharma teachings to Western people. Lama Yeshe and Lama Zopa decided at this time to go to Solu Khumbu to reclaim Lama Zopa Rinpoche’s Lawudo monastery. They arrived in Solu Khumbu with many difficulties. Lama Yeshe left Buxa for good in 1968.

In 1970 I met Lama Yeshe again in Bodh Gaya and we stayed together in one house. Lama was there with Zina and some other Western people from Kopan. Again we debated together. There were almost twenty monks together with me, including my own teacher, Geshe Tashi Bum. Everyone was pitted in debate against Lama Yeshe and only two other geshes. Laughing, the other monks told Lama Yeshe that he was only pursuing money now, instead of his practice. In fact, Lama Yeshe never cared much about his belongings or his money. He always shared everything with others without any problem.

At one point I was cooking food outside for everyone. Suddenly some Sherpas appeared, and they asked me in their very thick dialects, ‘Lama, have you seen our Nyingma lama?’ To this I replied (a bit with tongue in cheek, as I knew they were asking for Lama Zopa), ‘There is no Nyingma lama here!’ Having heard this, Lama Zopa came out of the door, and the Sherpas all fell on their faces and started to prostrate fervently. Lama Yeshe and I were both laughing very much.

Lama Yeshe and Lama Zopa had bought some leavened bread and butter, some tomatoes and vegetables. So they proceeded to butter the bread and to make a salad out of the vegetables, without really doing very much cooking. The other monks joked very much with Lama Yeshe, saying that as he got more money, then he became more and more miserly. ‘Now you won’t even spend money on food!’ But my teacher, Geshe Tashi Bum praised Lama’s diet very much, saying how healthy it was, and that if he didn’t have some kind of stomach malady that prevented him from eating raw food, he too would enjoy eating in that way.

I met Lama Yeshe again several times in India over the next few years. Every time we met he would ask me to come to teach in the West or to join him in Kopan. Eventually I came to Kopan, and it was here that I met Lama Yeshe once more. He was completely changed from the Lama Yeshe I had known when we were young. His way of thinking and his way of doing things had changed greatly.

To conclude, I just want to say that Lama Yeshe was of the greatest benefit to the West. When we were young together, I had no idea of what was going to happen. No one ever dreamed that things would turn out the way they have.

In the lam-rim, there’s some advice on how to get up early in the morning without being overwhelmed by sleep. Before getting into bed the night before, wash your feet while thinking of light. Try it; it works.