Lama Yeshe was born near Lhasa at a place called Tölung (Upper village), which was also near where my family lived. Lama’s family was of an average size, his mother and father had a strong faith in dharma, and Lama Yeshe also showed much interest in dharma when he was a small boy. Several of his brothers became geshes as well. His parents had a mixed farm where they grew crops and also kept animals. 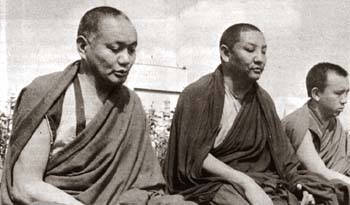 Lama Yeshe was ordained when he was about seven or eight years old. In the beginning the young monks learned the alphabet and memorized the daily prayers such as tung-shag and the Twenty One Praises to Tara. They also memorized the important texts to be studied in depth later on.

Lama began studying the Geshe subjects when he was about twelve years old. At Sera the year was divided into several terms of intense study with shorter breaks in between. During a typical day in the study time the monks would wake up early and make prostrations together in the stone courtyard. Then they would do morning puja together after which they would break up into different groups. Some would do debating, others would recite texts such as the Prajnaparamitasutras, and others would be reciting the Heart Sutra and Twenty One Praises to Tara many times. Mostly, this time was spent in discussing and debating the subjects they were studying. They would do this in their own rooms, in small groups.

Tsampa and tea had been taken during morning puja. It was again served after the debating session when all the monks would again assemble for puja. They would recite the Heart Sutra and any pujas which had been requested by others.

At midday there was another class for debating, after which all the monks again came together to recite the Heart Sutra. After that there was a break during which people were free to do as they wished. Many would go to different lamas to receive explanations on the teachings.

The evening brought another debating class. At the beginning of this class they would recite the Heart Sutra very slowly, meditating at the same time. Debating lasted a long while. This was followed by a short break and then the night class, dam-ja. began. During this class all the monks would ask questions of one or two monks who would sit in front. After this class the monks would retire to their own rooms where they would review the discussions held during the day, meditate, study, or sleep. So this is a typical day during a term of Geshe Studies.

Lama Yeshe followed the whole program without missing any terms and he did very well at his studies. All those who were following the course to become Geshes did the same things.

During the break periods in between terms some of the monks would stay in their own places, memorizing texts, others would visit teachers for special instruction, some would receive disciples to give teachings themselves. Also it was a time to reflect on all the subjects they had been studying and debating. Some of the monks would leave their rooms at the monastery and go to high places, huts and caves in the mountains where they would read, memorize, reflect and meditate upon the teachings.

When the monks studied the Abhisamayalamkara there would be classes lasting the whole night, every night. Usually the monks would stay up one night and sleep the next night, while others who had slept the first night would attend the class on the second night. During the day, even after staying up all night, they would still attend the entire program as already mentioned. During the all-night classes they would debate or the whole group would ask questions of one or two monks as before (dam-ja).

When the monks studied Madhyamakavatara they would spend two years staying up all night to debate. So three years were spent in this way. Lama Yeshe followed the whole program.

In the winter season there was a term called Jam-kön-chö. All the monks of Sera, Ganden and Drepung monasteries would gather together to debate subjects such as the Pramanavartika at a place called Jam—it had been blessed by Manjushri. The monks were not obliged to go but Lama Yeshe always attended. There was just a courtyard out in the open. They would build a wall of stones to block the freezing wind, and they would sleep in their own rooms back at Sera.

During the period in between terms some monks would stay up every night reciting texts. Lama Yeshe used to do this. Altogether he spent twelve or thirteen years doing the rigorous Geshe Studies – learning the essential texts. He also attended the teachings of Kyabje Ling Rinpoche, Kyabje Trijang Rinpoche and His Holiness the Dalai Lama given during the times between terms.

Also, it was the custom for monks of the higher classes to act as tutors for those of the lower classes. Lama Yeshe spent a lot of time teaching and answering questions in this way. Lama Yeshe’s own classmates included some high lamas and others who were very good in philosophical understanding and debate. Lama was a member of a very distinguished class.

After all this the Tibetans came to India. At first they stayed at a place called Buxa, members of all three Gelugpa monasteries came as well as of the four lineages of dharma in Tibet. At Buxa they studied Vinaya and the Abhidharmakosa. Lama Yeshe studied these texts and also reviewed the Madhyamakayatara. Abhisamayalankara and Pramanavartika texts already studied in Tibet. Also at this time Lama studied subjects such as poetry, grammar and the art of composition and writing. There were special teachers for these subjects. 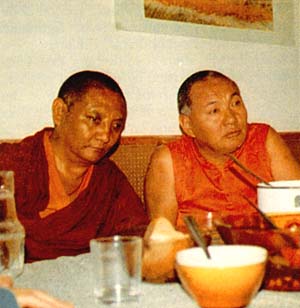 At Buxa Lama Yeshe also received many oral transmissions and initiations from His Holiness Song Rinpoche. He also learned the Gelugpa’s ‘uncommon’ prayers and tunes and other rituals. And he learned Hindi. He also learned some English from Lama Zopa, who had lived in Dalhousie.

Lama Yeshe and Lama Zopa met Zina and then Max Mathews. Their karma took them in the direction of Nepal where they began to meet many Westerners with whom they had a karmic connection from past lives. Lama Yeshe was still dependent upon Lama Zopa for speaking English. They established Kopan monastery and began a community of monks for the Sherpas, Manangs and Tibetans. At Kopan they set up a system of education just as in Tibet. The number of monks grew to about one hundred. These monks also received teachings in English and on Western subjects such as mathematics, science and geography. Lama Yeshe and Lama Zopa also established Lawudo gompa where the normal monastic activities of Nyung-ne, pujas on the tenth and twenty-fifth of the month and so on, were performed.

Meanwhile, the Lamas began giving teachings to Westerners. They also started to give Nye-ne, Genyen and Getsul vows to Westerners. Lama’s Western disciples invited him to teach in the West where he made contact with many more people and from there the centers of the FPMT began. Lama Yeshe established centers in so many countries and he also ensured that they had good teachings with geshes and translators so that dharma was being taught continuously.

Lama Yeshe and Lama Zopa then spent half of each year visiting the centers and giving teachings and inspiring the students. They also invited high Lamas such as Khenpo Geshe Legden. His Holiness Song Rinpoche and His Holiness the Dalai Lama to visit the dharma centers.

Among Lama Yeshe’s thousands of disciples about one hundred have received ordination as getsul or gelongs, and the majority took genyen vows.

From my side I have nothing to say about whether Lama Yeshe was a buddha or a bodhisattva. It is possible that he is a special being. I cannot say that he is not. There are many manifesations of buddhas and bodhisattvas in the aspect of lamas, ordinary monks and nuns, and lay people. They manifest in this way to benefit sentient beings.

Lama Yeshe’s activities were very vast. He did all of these extensive actions with the title of an ‘ordinary monk.’ His works were very beneficial for others. Through Lama Yeshe’s efforts dharma. which is benign for sentient beings, has flourished. The activities that Lama Yeshe performed are the activities of all holy beings.

From my side, Lama Yeshe was a friend. I felt very well.