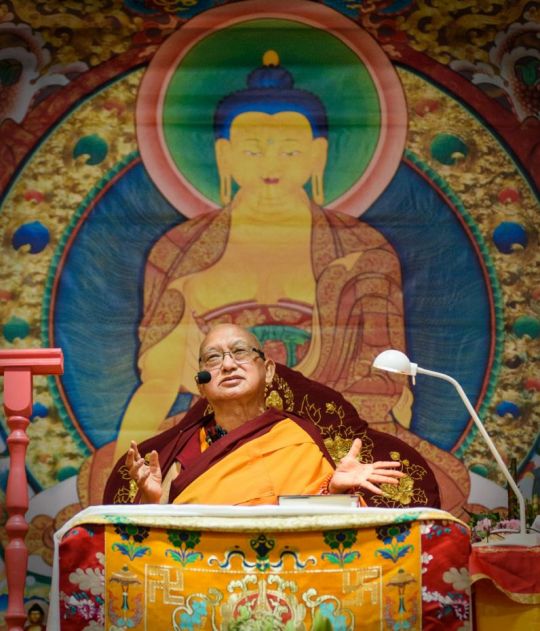 “If animals hear this Namgyalma mantra, it is last time they will be animals; they will never get reborn in lower realms at all, ” Lama Zopa Rinpoche taught in Ganden Tendar Ling in Moscow, Russia, in 2017. “They will always get higher rebirths, always meet buddhas and bodhisattvas, always have a pure life, always go to enlightenment, and never return to the lower realms. The Namgyalma mantra has great benefit. Even if animals hear, it is their last time being an animal. So, there is no question it is the same for human beings.”

Rinpoche spoke more about the benefits of the mantra in “The Benefits of Namgyalma Mantra,” found in the August-September 2008 issue of Mandala.

“Also it is mentioned in the commentary on Namgyalma’s mantra:

“If one recites this mantra twenty-one times, then blows on yellow mustard seeds and throws them on the bones of the sentient being who has accumulated much negative karma and has died, even if that sentient being has been reborn as a hell being, a preta, an animal, in the world of Yama, or in other evil transmigratory realms, because of the power of this mantra he will be liberated from those unfortunate realms.

“Namgyalma is a deity for long life and purification. The mantra has infinite benefits; it is so powerful. It is said that for anyone who hears this mantra, this will be the last time that person is born in the womb. If animals hear it, they will not be reborn in the lower realms.

“The kind and compassionate Guru Shakyamuni Buddha taught the benefits of reciting the Namgyalma mantra to the Four Guardians. If you wash the body, wear clean clothes and, while living in the eight precepts, recite the mantra 1,000 times, even if you are in danger of death due to the lifespan accorded by past karma finishing, your lifespan can be prolonged, the obscurations are purified, and you are freed from disease.

“If you recite the mantra in the ears of animals, it will ensure that this is their last animal rebirth. If somebody has a very heavy disease that doctors cannot diagnose, by doing the practice mentioned above, the patient will be liberated from the disease. They will not be reborn in the lower realms ever again. After death, you will be reborn in the blissful realm, the pure land. For humans, it makes the present life the last rebirth from a womb. If you recite this mantra twenty-one times, blow on mustard seeds, and then throw them on the bones of very evil beings who have created many heavy negative karmas, even those beings will be immediately liberated from the lower realms and will be reborn in a higher realm, such as those of the devas. By throwing the seeds on bones or dead bodies, the mantra affects the consciousness and purifies it, even though the beings have already been reborn in the hells or any of the lower realms, and those beings are reborn in the deva realms and so on. …”

Note: Listening to this recording does not count as receiving the oral transmission, which must be done in person. However, students do receive the benefits of reciting the mantra, as taught by Lama Zopa Rinpoche, whether they have received the oral transmission or not.

Through comprehensive study programs, practice materials, and training seminars, FPMT Education nourishes the development of compassion, wisdom, kindness, and true happiness in individuals of all ages.

When we study Buddhism, we are studying ourselves, the nature of our own minds