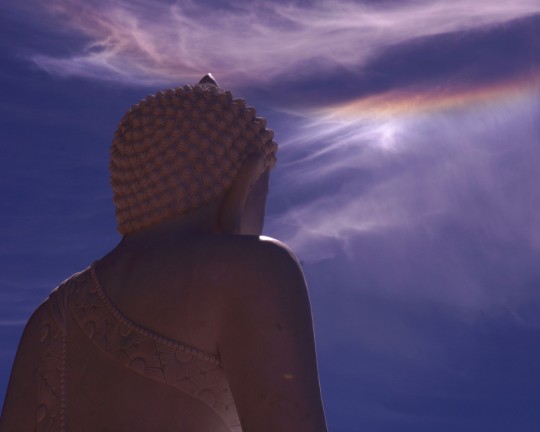 A solid white marble Amitabha Buddha statue arrived at Buddha Amitabha Pure Land (BAPL) in Washington State on June 30, 2014. Resident Sangha and students from nearby Pamtingpa Center welcomed the statue with incense and blowing conches, leading the large truck hauling the statue still in its shipping container onto the land. Lama Zopa Rinpoche instructed that those in the procession should think that they are welcoming the Buddha himself to the land.

The following day, the 16 ton (14,790 kilogram) statue and its marble lotus throne were lifted by a crane onto a filled throne base created by Ven. Gyaltan Yarphel [John Jackson]. Rainbows appeared in the sky once the 13-foot (4-meter) statue was situated, culminating a two-year process. Once the statue was placed, local students did extensive prayers, the seven limbs with extensive offering practice and recited the beautiful “Praise to Amitabha” by Lama Tsongkhapa. 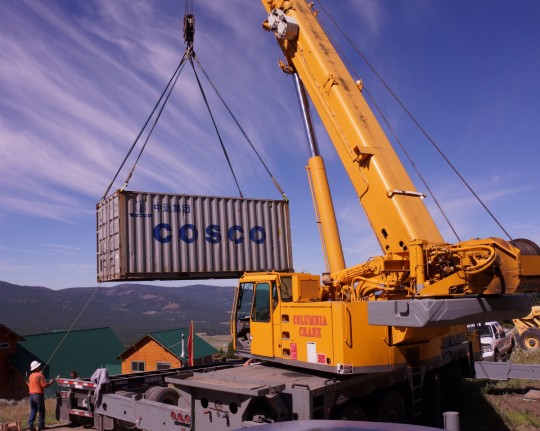 Lama Zopa Rinpoche had been involved with every step of the creation of the statue, including the details of the carving, which was done in Vietnam. Rinpoche sent drawn suggestions to the artists with explanations. Last year, a typhoon hit the location where the statue was carved and ended up delaying its arrival in the United States by a year.

The first thing Rinpoche did upon his arrival at Buddha Amitabha Pure Land on July 22, 2014, was to go see the new Amitabha statue. Rinpoche immediately led a long extensive offering practice in which he offered all the water bowls and flowers at the house at BAPL, as well as at Kachoe Dechen Ling in California and at all of the FPMT centers, projects and services around the world, and then recited the “Praise to Amitabha” by Lama Tsongkhapa. 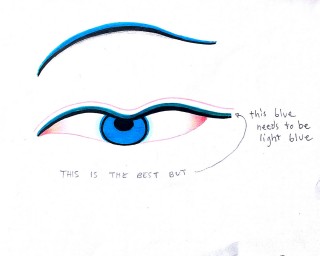 Rinpoche saw that there were still some details on the statue that needed to be adjusted, which he noted for Gelek Sherpa, a master artist resident at Land of Medicine Buddha in California and a former monk from Kopan Monastery, who would soon be arriving to paint the statue and throne.

Locals heard about the statue and asked whether they could visit it.

The large statue sits on a hill behind Rinpoche’s house and overlooks the valley. Except for when Rinpoche was in strict retreat, Rinpoche visited the statue every single day during his stay at BAPL in July and August. Every time he went up to the statue, which for Rinpoche is about a 10-15 minute walk, Rinpoche first would check whether there were any ants on the road to the statue and carefully moved them to the side. Rinpoche would lead an extensive offering practice, often with a recording of a gyaling playing throughout and then chant the “Praise to Amitabha” by Lama Tsongkhapa and the prayer to be reborn in the blissful realm of Sukhavati, Amitabha’s pure land. 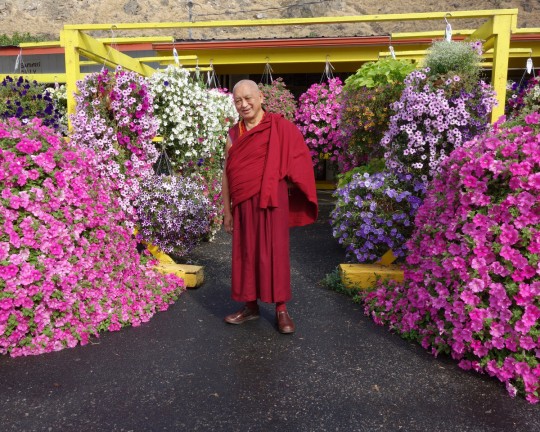 After arriving in Washington, Lama Zopa Rinpoche shopped for extensive flower offerings for the new Amitabha Buddha statue, driving as far as two hours away looking for flowers, US, July 2014. Photo by Ven. Roger Kunsang.

Two days after arriving, Rinpoche wanted to go to town to personally pick out flower offerings. Rinpoche took the utmost care picking out the exact kinds of potted flowers for their color and size. He nearly bought out all the flowers in the local town. Ven. Yarphel spent each day transplanting the flowers into bigger pots or digging holes and planting them in the ground. Ven. Tharchin watered them each day, sometimes twice a day as there happened to be in a heat wave with temperatures in the high 90s, which is about 35°C.

The following day, Rinpoche wanted to drive two hours away to find other nurseries with different flowers. Unfortunately, there are not too many to choose from in the area, but we discovered by accident an incredible flower shop on the side of the road. Rinpoche bought about six giant containers of flowers. We had to come a second time to pick everything up with a trailer. Throughout the visit there were many more trips to flower shops to get certain colors or sized flowers and each time they were brought to the statue, Rinpoche would lead an extensive offering practice. Usually, these happened at night by flashlight. And at the end, a thermos of tea would be enjoyed in the dark in front of Amitabha Buddha. 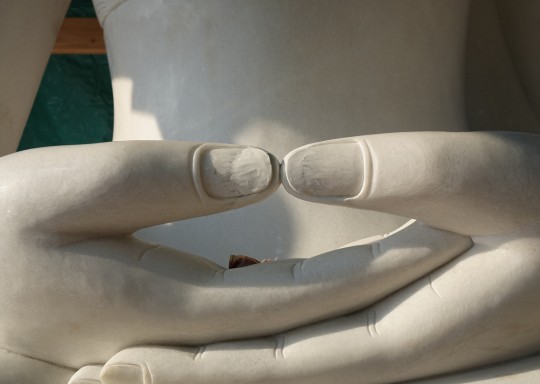 The thumbs of the statue also need to be extended to touch, Buddha Amitabha Pure Land, Washington, US, August 2014. Photo by Ven. Roger Kunsang.

The artist Gelek Sherpa arrived from California and immediately started work on the statue. The first thing he did was change the shape of the eyes and then made the statue’s thumbs touch. 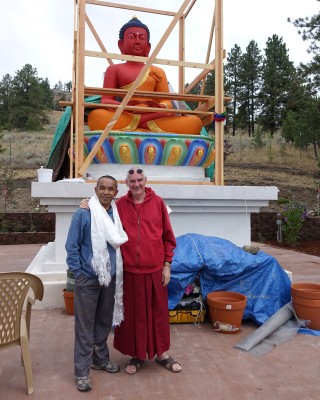 Gelek worked extremely quickly, despite the heat. He had about 10 days to paint the statue before the Buddha Amitabha celebration day that was being planned. He mentioned one day that the incredible amount of flowers around the statue attracted many hummingbirds and butterflies, who actually chased the humming birds away! Each day the statue changed. It first became red, then the lotus was painted, and finally, the day before the celebration, the eyes were opened. Rinpoche explained that it’s important to make offerings to the artist the day the eyes are opened on a statue because the artist is creating the cause for us all to create merit. On the day the eyes were opened, Ven. Roger came up with a khata, money offering and coffee for Gelek.

Mandala brings you news of Lama Zopa Rinpoche and of activities, teachings and events from over 160 FPMT centers, projects and services around the globe. If you like what you read on Mandala, consider becoming a Friend of FPMT, which supports our work.