FPMT News Around the World 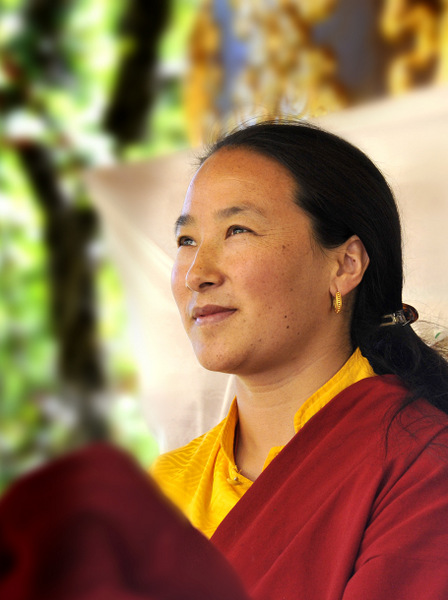 Rangjung Neljorma Khadro Namsel Drönme, who is more commonly known as Khadro-la, recently offered teachings at Nalanda Monastery in France as part of a retreat on “Guru Yoga of Chenrezig, Developing a Compassionate Heart.” The retreat, Khadro-la’s second at the monastery, took place August 20-29, 2012.

During the retreat, Khadro-la took time to speak with representatives of FPMT’s European centers. They requested that she return to Europe for another teaching tour and rejoiced in Khadro-la’s affirmative answer.

“Yes, this year impossible; next year, yes,” Khadro-la told the representatives. “If it is beneficial, it’s good. But if it is not beneficial, there is a lot of money involved, a lot of work, many people make arrangements – and if a lot of money is spent and it is not beneficial, I do not feel comfortable coming. Some people really like to go to the West, to visit many countries, but I don’t have this kind of interest. What is my major interest? To be of benefit to people. So if there is benefit, then I like to come, despite hardships. We will see for next year when is good. And I already asked His Holiness about it and he said that he was happy that I visit the centers of Lama Zopa Rinpoche. And also Lama Zopa Rinpoche insisted a lot: ‘Please visit the centers.’ If it is beneficial, I will definitely come. If it is not beneficial, I will close the door, practice inside and not come!”*

During July and August 2012, Khadro-la visited several FPMT centers in Europe, including Centro Nagarjuna Valencia, Nagarjuna C.E.T. Barcelona and O.Sel.Ling Centro de Retiros in Spain; Centro Tara Cittamani, Istituto Lama Tzong Khapa and Kushi Ling Retreat Centre in Italy; Longku Center in Switzerland; and Institut Vajra Yogini and Nalanda Monastery in France. Many other European centers had also hoped to host her on this visit, but were unable to. It was good news for all that she agreed to return.

“The fact that the doctrine of the Buddha, the Buddhadharma, is remaining and still present and developing in this world, is due to the presence of His Holiness the Dalai Lama, Vajradhara himself, holder of the doctrine, who makes the doctrine of the Buddha flourish, like a lake in a rainy summer (not here – it is dry here) and the lake becomes huge,” Khadro-la told the European center representatives. “The FPMT centers are born from the kindness of Lama Zopa Rinpoche and Lama Yeshe, and their great activity. There is no way to forget this great kindness, and also there’s no way to repay this kindness. … Due to the existence of these centers many sentient have had the opportunity to create a lot of merit. And also many holy beings, enlightened beings themselves, have been able to come, and in this way to create a connection, and many sentient beings have been able to meet those holy beings. … So we can see directly and indirectly in different ways, thanks to the work in FPMT centers, so much merit has been able to be accumulated. And that is really amazing.”

next issue of Mandala that features an exclusive interview with Khadro-la.

Offer ends September 30 or when the magazine sells out.

With 158 centers, projects and services around the globe, there is always news on FPMT activities, teachers and events. Mandala hopes to share as many of these timely stories as possible. If you have news you would like to share, please let us know.