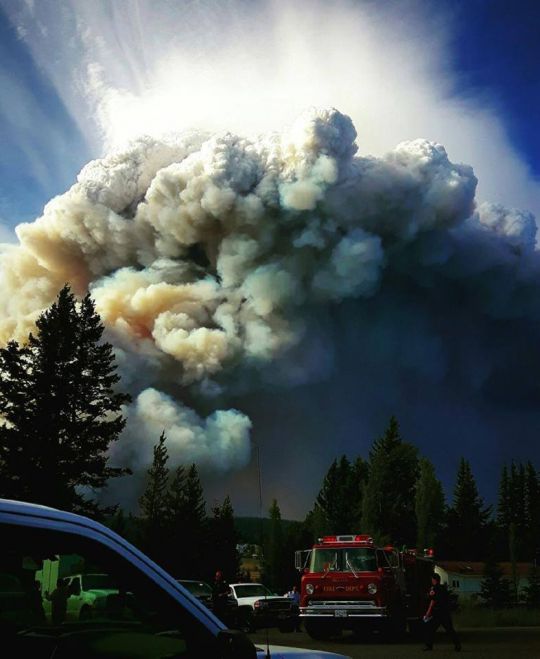 Smoke from the 2017 British Columbia wildfires. Photo by 150 Mile Fire Department, via Facebook.

In early July, massive wildfires in central British Columbia, Canada, broke out forcing tens of thousands of people to be evacuated from their homes, including some students from Gendun Drubpa Centre in Williams Lake. They were relieved to hear on July 27 that they could return home. Spiritual program coordinator Dianne Noort reported that for now “Gendun Drubpa Buddhist Centre is fine and we will be assessing the smoke damage.” The condition of the center’s Stupa for World Peace and Environmental Harmony, which is on private property at nearby Spokin Lake, is unknown. Dianne shared some of her experiences as the south Cariboo wildfires got worse:

We carried on with our usual daily tasks and practices, but with an awareness of the wildfires. At first, everything seemed to be under control until an overnight wind and lightning storm blew out our power and then our phone, pushing us to a more alert state. Our telephone was restored first, and we received calls from close friends and family, telling us of the alarming increase in fire activity. …

We live in the Cariboo, an area on a vast plateau in southcentral British Columbia with lots of wilderness. Our daily mindset is one of rural living among trees and thick-tangled underbrush, wild animals, ranging cattle, resource extraction, and dirt roads. The commercial centers, Quesnel, Willimas Lake, and 100 Mile House, were all under threat of wildfire. So, abruptly our daily activities were less pressing, and it was more important to prepare for possibly having to leave the area. As we packed our two vehicles, three categories of possessions became evident: 1) what was needed on the road if we had to spend a night or two somewhere without food or facilities; 2) ourselves and our two large dogs, some clothing, and leashes; 3) important papers, laptops, and a few of our most valued objects. I watched my mind categorize what was important. I’m generally a minimalist; yet even so, I’d never had to think this way.

On the fourth day, our power was restored and we learned that our village gas station had reopened—a $30.00 limit per vehicle and a $20.00 limit to fill gas cans. Our usually stalwart neighbor appeared really worried about how much gas we all had and mentioned several times how long his generator had to run to get the freezer level up. He and another neighbor had also set up their fire pumps in the lake and were hosing down their roofs and the perimeters of their houses. That night we watched the TV news and the seriousness of the situation sunk in. The Williams Lake Airport was even closed. That we had phone and electricity seemed nothing short of a miracle!

Although our village of Horsefly was still safe, two days later we decided to try and get out. The smoke was very thick. Exact information on which roads were open was difficult to ascertain, partly because things were changing so quickly and partly due to no cell service in the area, making it challenging for even emergency service providers to communicate with each other. We set off in our two vehicles with our two dogs and worked our way through the back roads, taking a wrong turn, back-tracking to correct it, and eventually arriving at a Cariboo Highway checkpoint, where we were told that there was no going south as the highway had been closed only ten minutes before. 100 Mile House was evacuated. The earnest young Royal Canadian Mounted Police officer informed us that he had just lost his house near the Williams Lake Airport.

It was uncanny, with burning fires on the both sides of the road, burned telephone poles being replaced by a dozen crews from the power company, smokey haze, emergency crews everywhere. Only two gas stations in Williams Lake had power, and we lined up for gas. The young couple behind us were part of the hundreds that had just been evacuated from the community adjacent to the airport. After filling up, we went to check on Gendun Drubpa Buddhist Centre, let the dogs out of the vehicle to feed them, and sent some text and email messages out to friends and family. Perhaps bizarrely, I watered the plants. After, we high-tailed it home, arriving just before dark.

I called as many of our Gendun Drubpa members and associates as possible in Williams Lake and surrounding areas to see how they were doing and pass on important wildfire practice information from Lama Zopa Rinpoche’s “New Advice on Wildfires.” Barrie and Marilyn, owners of the beautiful property where our Stupa for World Peace and Environmental Harmony is located, were still at their home and reported that helicopters were using the lake to fill their buckets with water. Bulldozers at the southeast corner of lake had pushed through and built a fire-guard. 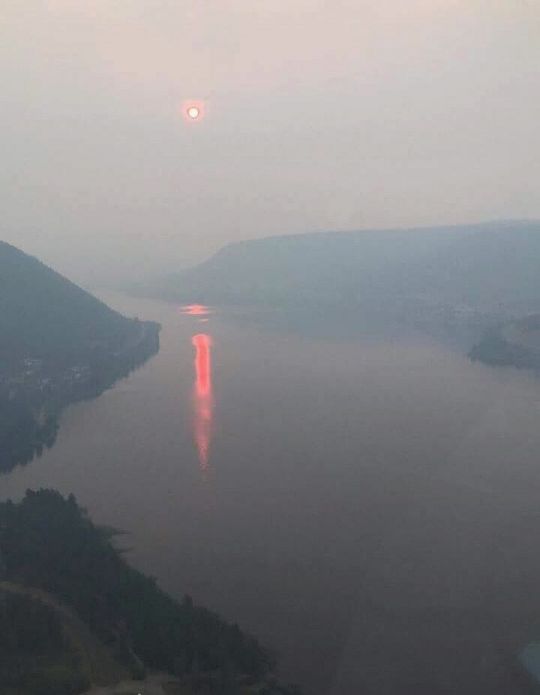 At one point, I received an email from center director Colleen O’Neill:

“Once the evacuation alert was issued, I packed the thangkas and bigger statues and altar items [from the center] into my car along with a small amount of my personal belongings. The next day, I decided to evacuate due to very poor air quality. I left all our valuable and holy objects in the care of one of our members further away from the city. I was not able to remove our extensive library, our Maitreya statue, or our other ritual items or supplies because I drive a small sedan. I had to leave a bit of room for my personal precious items, and at that point in time, was not sure if I would have take my grandchildren as well because they were in my care.”

A state of emergency was called by our government. Life was surreal. It was like we were under house-arrest; our main preoccupation was to keep abreast of the ever-changing situation. The road going north to Quesnel and Prince George reopened, but on a permit-only basis. Before the week drew to a close, Williams Lake was also evacuated and everyone was directed south to Kamloops. The whole city shut down as the fires were only 7 kilometers [4 miles] away from the center of town. Now, supplies were really getting scarce. The smoke rolled in even thicker. I continued my Medicine Buddha practice and posted updated wildfire news on the Gendun Drubpa Centre Facebook page. I teach a yoga class in my community and to lighten the mood I offered a free “stress-busting” session. It was well attended!

As of July 27, residents of Williams Lake were welcomed back, but are still under an alert order. They are advised to have their cars packed, with a full tank of gas and be ready to leave again in thirty minutes. We have no updated news of the stupa and ask for everyone’s prayers and support.

Updates on the 2017 British Columbia wildfires is available online:
http://www2.gov.bc.ca/gov/content/safety/wildfire-status/wildfire-situation

Mandala brings you news of Lama Zopa Rinpoche and of activities, teachings and events from over 160 FPMT centers, projects and services around the globe. If you like what you read in Mandala, consider becoming a Friend of FPMT, which supports our work.