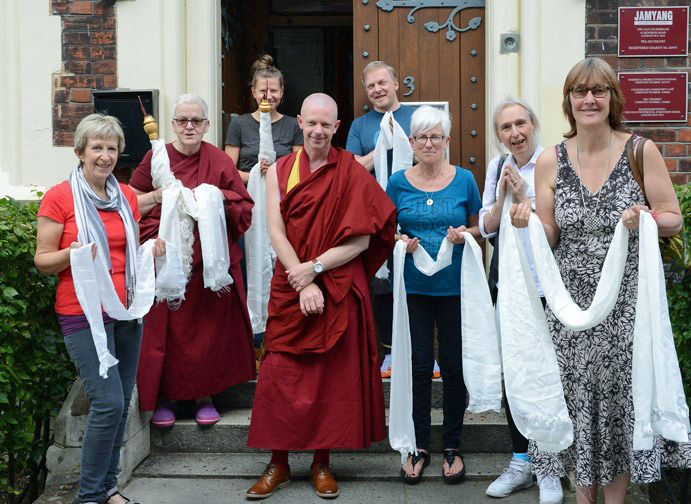 In March 2018, His Holiness the Dalai Lama appointed Geshe Tashi Tsering, Jamyang Buddhist Centre’s former resident geshe, abbot of Sera Mey Monastery in South India. Everyone was delighted for Geshe-la but also concerned for the future. We were very fortunate that in September 2018 Lama Zopa Rinpoche asked Geshe Tenzin Namdak to take up the role of resident geshe at Jamyang Buddhist Centre and give teachings here for six months each year.

Geshe Namdak  completed the entire twenty-year geshe program at Sera Jey Monastic University in 2017, and the traditional one-year vajrayana study program at Gyudmed Tantric Monastic University in January 2019, the first Westerner to do so. Geshe Namdak accepted Rinpoche’s request and arrived in May, starting teachings on meditation, Buddhist philosophy and psychology, and the art of emotional intelligence. These teachings ran until July.

Watch Ven. Fabienne Pradelle and Geshe Tenzin Namdak introduce themselves to the community in this video:
https://youtu.be/cQRgI798Ovk 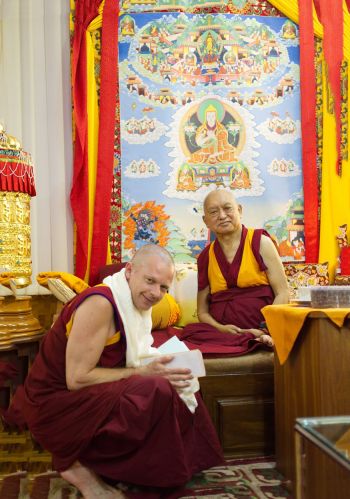 Geshe Namdak rounded off his teaching program by leading an eight-day retreat on “The Buddhist Path to Happiness.” Each day consisted of teachings on the lamrim based on Je Tsongkhapa’s “A Hymn of Experience” followed by question and answer session, group discussion, and meditation.

“A Hymn of Experience” is a wonderful overview of the whole lamrim. Geshe-la expanded and explained each verse, providing his deep insight to Je Tsongkhapa’s experience of the path to enlightenment.

The entire retreat had a great atmosphere generated by Geshe-la’s enthusiasm and the interactions among the students.

Everyone at Jamyang is delighted that our center has a resident teacher again, and we are looking forward to Geshe Namdak’s autumn teachings. Geshe-la’s enthusiasm and engagement are especially appreciated by our community.

To read His Holiness the Dalai Lama’s commentary on “A Hymn of Experience” (also known as “Lines of Experience”) visit the Lama Yeshe Wisdom Archive:
https://www.lamayeshe.com/article/chapter/illuminating-path-enlightenment

Meditation is not on the level of the object, but on that of the subject. You are the business of your meditation.