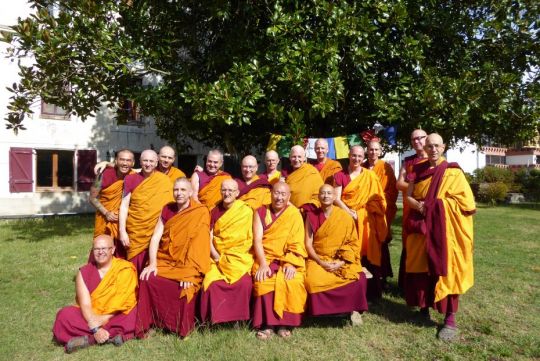 Ven. Losang Tendar is the director of International Mahayana Institute, the FPMT community of monks and nuns. He shares about the annual rains retreat held at Nalanda Monastery, a FPMT center in Lavaur, France, from August 26-October 9, 2018.

Some of the monks who did the retreat are Nalanda residents. Others came to Nalanda as guests so they could join the retreat. The retreat was conducted under the guidance of one of Nalanda’s resident teachers, Geshe Jamphel Gyaltsen.

The Buddha encouraged the Sangha to come together at their monasteries during the summer months and to devote six weeks to joyfully and intensely engaging in practice and study. Sangha are encouraged to practice harmoniously and refrain from insults and conflicts.

Within the FPMT organization, Nalanda is the only monastery in the West that engages in the three activities that define a monastery. These activities are Sojong, the bi-monthly confession ceremony; Yarne, the beginning of the rains retreat; and Gaye, the end of the rains retreat ceremony. In our Western countries, where do you find this completely and regularly done? Maybe in a few places, but it certainly happens at Nalanda, and that makes Nalanda a very special place. 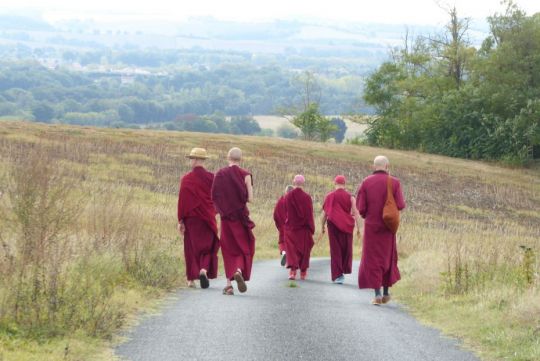 In September, FPMT’s residential study programs—the Basic Program and the Masters Program—both of which are offered at Nalanda, resumed. Most of the monks are participating in one or the other, so they began classes again.

Ven. Jesus Revert said, “It was very joyous, to stay for these months together as monks—to study together and have exchanges—but to also have time to read my own books and engage in meditation sessions. I enjoyed the excellent conditions and the feeling of community.”

We thank all of our kind and generous supporters who enable us to engage in these activities.

To learn more about Nalanda Monastery, visit their website:
https://nalanda-monastery.eu/index.php/en/

To learn more about the International Mahayana Institute, visit their website:
http://imisangha.org/

When we are able to recognize and forgive ignorant actions done in one’s past, we strengthen ourselves and can solve the problems of the present constructively.