Shantideva Study Group Working for Peace in Israel and Palestine 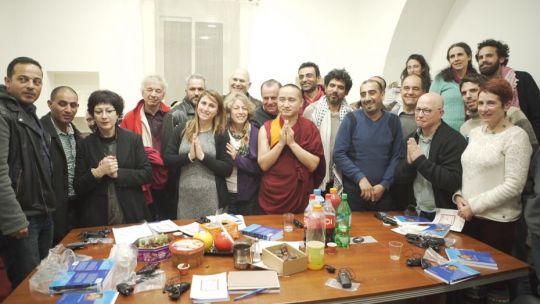 Shuki Preminger, coordinator of the Shantideva Study Group in Israel, introduces us to Women Wage Peace and Combatants for Peace—two groups of Palestinians and Israelis working together to create peace—and shares the details of their meetings with Dagri Rinpoche, Geshe Tenzin Zopa, and Dr. Lobsang Sangay:

Combatants for Peace is a Palestinian-Israeli organization committed to promoting dialogue and a non-violent resolution of the Israeli–Palestinian conflict. It was started by ex-soldiers from both sides who participated in the ongoing violent, bloody armed-conflict.

Twelve years ago, the group started to observe a mutual memorial day for the victims of both sides of the violence called the Israeli-Palestinian Memorial Day Ceremony. This alternative memorial day draws attention to the idea that grief is the same on both sides. The pain is the same; the tears of a mother crying for her killed or wounded child are the same.

Over the years, attendance at the Israeli-Palestinian Memorial Day Ceremony has slowly increased. Last April, 10,000 people participated in the ceremony, while 50,000 more watched online.

Three years ago, Nobel Laureate Bishop Desmond Tutu gave an inspiring video keynote to the participants. Afterwards I was contacted by Uri Ben Asa, the Israeli CEO of Combatants for Peace, who is a personal friend of mine. (Combatants for Peace also has a Palestinian CEO, Sulliman Chatib.) Uri Ben Asa was seeking a similar message from His Holiness the 14th Dalai Lama.
Shortly after I received this request, Geshe Tenzin Zopa, an FPMT touring geshe, came to visit the Shantideva Study Group. I arranged a meeting with Geshe Tenzin Zopa, Combatants for Peace, and the Shantideva Study Group. We jointly discussed the benefits of a compassionate, non-violent dialogue. 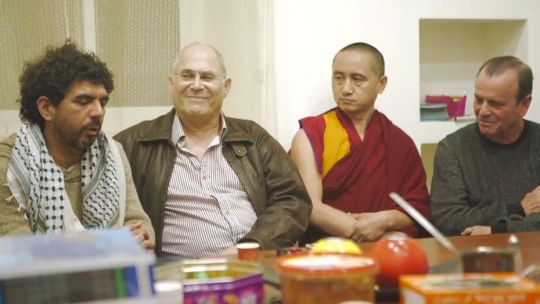 We created a video with highlights from the visits of Geshe Tenzin Zopa and Dagri Rinpoche. You can watch the ten-minute video on YouTube:
https://youtu.be/QzdGQrYPUIQ

In June 2018 Lobsang Sangay, President of the Central Tibetan Administration, made his first official trip to Israel. He convened a meeting in East Jerusalem attended by Combatants for Peace, Shantideva Study Group, and the Bereaved Family Circle. It was a very inspiring get-together, where both wisdom and compassion were discussed as the only means to end this conflict.

Lobsang Sangay emphasized the idea of His Holiness the Dalai Lama to not use any violence in the Tibetan quest for freedom. The local participants were absolutely stunned by this, and a very positive discussion ensued. At the end a Palestinian from Jericho said to us Israelis: “Perhaps you can make us love you so that we want to live together with you.”
To me this resonated with the very powerful statement—which can be seen in the YouTube video—made by a Palestinian father whose daughter was killed by an Israeli soldier. The father reflects on this tragic event in the most powerful, heartbreaking words of compassion and wisdom.
The father said, “In my case, I really ask the [person] who killed my daughter that if you ask me to forgive you, I will forgive you. Because I think I’ve already forgiven myself, and forgiveness, it’s for yourself. You discover that you can live in peace even in the middle of a very violent conflict because no one can occupy you and you live a normal life.”
We will continue to work with these group and all others who advocate non-violent compassionate conflict resolution. We hope this is of benefit to all sentient beings.