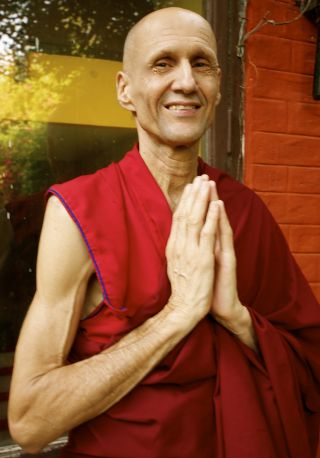 I’m very happy indeed to have this opportunity to introduce myself as the new director of Maitreya Buddha Project Kushinagar.

I became involved with FPMT just after Easter 1977 in England during my studies in history at the beautiful university town of Oxford. Venerable Thubten Pemo, then living in England, was my first meditation instructor. I am so grateful to her.

My mother was English and father Indian, so I had a mix of both cultures, and since I opted for an Indian passport way back, I now stay in the land of my birth without visa hassles as I have been doing since 1983, when Lama Thubten Yeshe asked me to be director of Root Institute in Bodhgaya in order to help “repay the kindness of the Indian people.” Lama said he had faith in me and those words have sustained me in challenging times ever since.

During that early time Lama Yeshe shared with me his extraordinary vision for a large Maitreya Buddha statue or “Maitreya Project” as it later became known.

Now again in 2016, Kyabje Lama Zopa Rinpoche has again manifested faith in me for some inexplicable deeply hidden karmic reason by appointing me director of the Maitreya Project in Kushinagar, a project sixteen years in the making. These Maitreya Projects (there is another in Bodhgaya of course) were the heart-projects of Lama Thubten Yeshe, the founder of FPMT and Maitreya Project. I am deeply honored and humbled, and feel somewhat unworthy, and occasionally disoriented by the task ahead. I am, however, joyful at this opportunity to be of some benefit before I succumb to old age, decrepitude, and alas … death!

What we have set out to accomplish in Kushinagar is ambitious. It is a project with many spiritual, social, and economic facets. Apart from the large Maitreya Buddha statue to be set in a temple complex that also houses holy relics, we intend to create a Centre for Interfaith Dialogue; an Academy of Mind-Science as per His Holiness the Dalai Lama’s suggestion; educational facilities emphasizing the 16 Guidelines for a Happy Life; medical projects in the surrounding villages, as well as a quality hospital; a hospice; old people’s home; animal sanctuary; retreat area perhaps in the already wooded area; a permaculture pilot project; organic gardening; water conservation/harvesting; and waste management center … and there could be more! We also aim to lease some small parcels of land to other Buddhist like-minded organizations in a spirit of sharing and harmony. 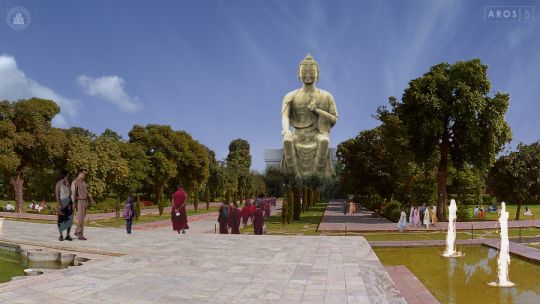 India has seen a flight from the rural areas to the urban conglomerations, leading to debasement of life in both arenas. One major aim of mine is to restore the dignity of a useful, productive, and sustainable rural lifestyle at a time in India’s development when city life is becoming unbearable and competitively selfish. What the world needs more of now is cooperation and mutual aid as we face the results of more than 200 years of fast-paced industrial and technological development.

I intend the project to be the most inspiring, uplifting, and beautiful phenomenon that people will ever witness in their lives. I also intend to fulfill Rinpoche’s wish for the project to be “most beneficial” for all sentient beings as well as for it to help beings generate authentic loving-kindness in their minds.

For all this to happen we need not only your prayers and goodwill but also your continued generous and open-hearted support. Rinpoche has said this project will help FPMT to be more beneficial as well as contribute to more peace and harmony in North India and the world. We’ll all just have to do our very best!

I hope I can set a good and responsible example.

This is my heartfelt aspiration. I look forward to working with, and sharing this journey with, all of you—known and as yet unknown.

Thank you all so very much.

This letter was lightly edited by Mandala for inclusion on FPMT.org. 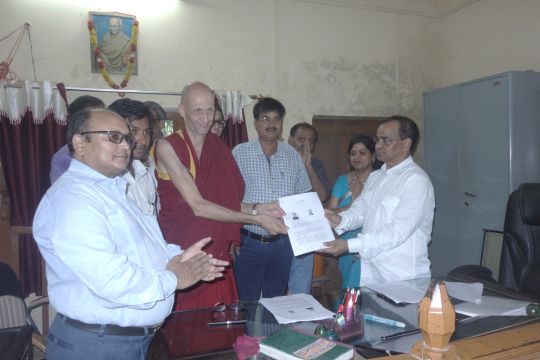 Ven. Kabir Saxena and the handover team at the registrar’s office in Kushinagar, UP, India. The land for the statue in Kushinagar was officially signed over by the state government of Uttar Pradesh, August 19, 2016. Photo courtesy of Maitreya Buddha Project Kushinagar.

Mandala brings you news of Lama Zopa Rinpoche and of activities, teachings, and events from nearly 160 FPMT centers, projects and services around the globe. If you like what you read on Mandala, consider becoming a Friend of FPMT, which supports our work.