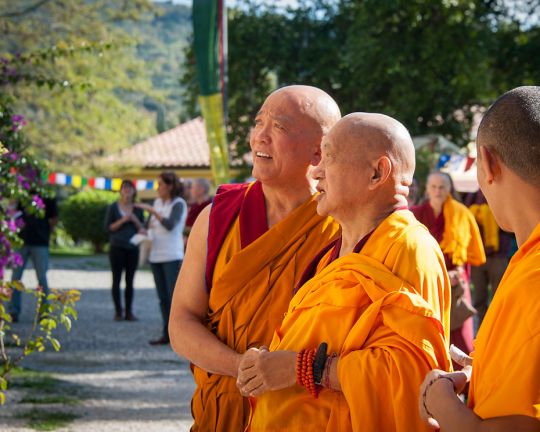 The 100 Million Mani Mantra retreat in Italy with Lama Zopa Rinpoche concluded with a long life puja offered to Rinpoche. Istituto Lama Tzong Khapa (ILTK) organized the month-long retreat, where about 200 people participated in the entire retreat with hundreds more attending parts of the retreat. Sixty-eight million mani mantras were recited by participants.

Every day retreatants did Lama Chöpa practice in the morning. Then they did three sessions of Chenrezig sadhana. Rinpoche usually came and taught during the evening session and did the sadhana practice. Extensive bath offerings were done in front of the large Chenrezig statues. Throughout the retreat, Rinpoche gave clear and inspiring teachings covering many topics including, Lama Chöpa, bodhichitta, emptiness, and guru devotion. Video recordings of all of Rinpoche’s teachings are available on FPMT.org. 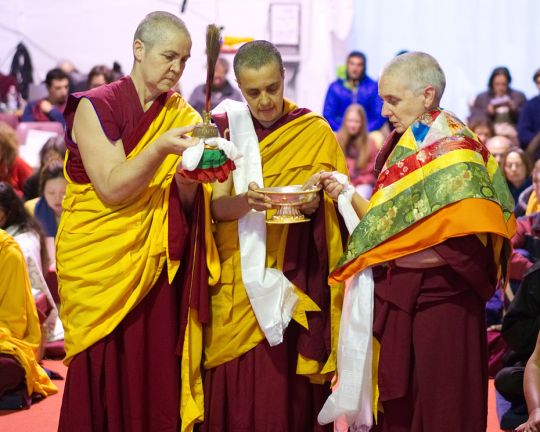 Many hard-working volunteers ensured that everything at the retreat went very well and that the needs of the large group were met. Participants walked to the village for meals where there was a large tent set up as a dining hall and kitchen. Ven. Charles from Institut Vajra Yogini in France came especially to volunteer as a cook for the retreat. 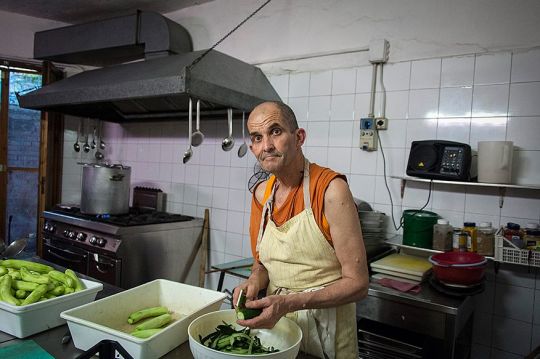 During the retreat, Rinpoche met with and offered personal advice to many students, from many different centers, including groups from Nalanda Monastery in France and Aryatara Institut in Germany. He also met with students of the Basic Program and the Masters Program at ILTK. Three FPMT Foundation Service Seminar facilitators gave Rinpoche a short presentation about the training and received advice from him about it. Rinpoche also took time to offer blessings to children and pets. 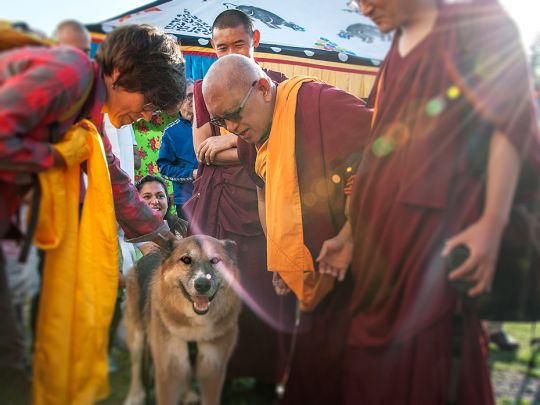 Rinpoche’s days were full of activities, including an animal blessing by the water and blessing horses at a nearby sanctuary. He also visited the mother of Massimo Corona, whose family offered the building that is the center. She still lives on the property. Rinpoche had lunch with the center’s resident geshes one day and did sojong with fifty-five Sangha who were in attendance.

One day Rinpoche toured all the buildings and grounds of Istituto Lama Tzong Khapa. He visited the center’s gompas, classrooms, offices, the library, and kitchen. He visited Chiara Luce Edizioni, where they publish Dharma in Italian. Rinpoche also saw the studio where they make stupas, run by STUPA Onlus, which offered stupas to the retreat participants. 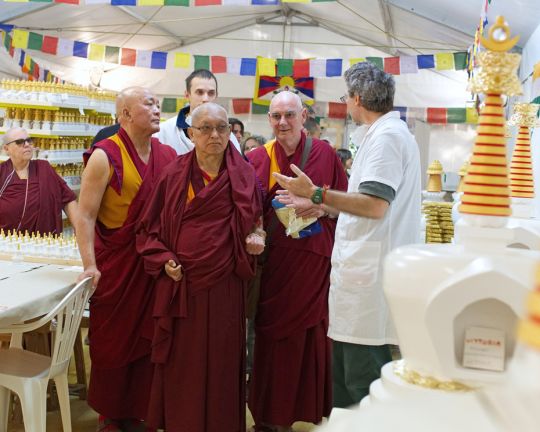 During the beautiful long life puja on November 3, the teaching tent was packed to capacity. The energy for the puja was very strong, with heavy rain falling at auspicious times, and the sun coming out at the very end of the puja.

On the weekend following the retreat’s conclusion, Rinpoche offered two more days of initiations at ILTK. He then made short visits to Centro Terra di Unificazione Ewam in Florence and Centro Muni Gyana in Sicily.

More information, photos and updates about FPMT spiritual director Lama Zopdeata Rinpoche can be found on Rinpoche’s webpage on FPMT.org. If you’d like to receive news of Lama Zopa Rinpoche and FPMT via email, sign up to FPMT News.

It is important to understand that true practice is something we do from moment to moment, from day to day. We do whatever we can, with whatever wisdom we have, and dedicate it all to the benefit of others. We just live our life simply, to the best of our ability.