Freeing All Beings from Suffering 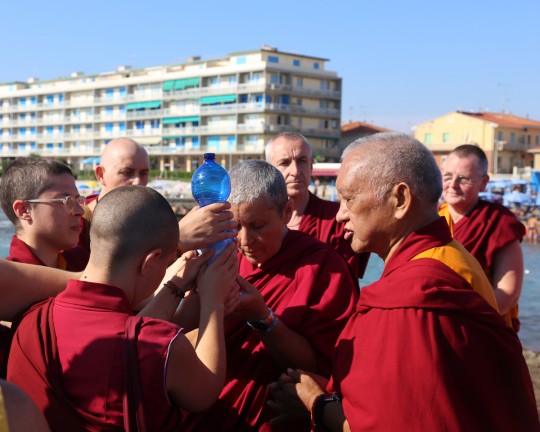 Lama Zopa Rinpoche with Sangha doing a blessing for all the sentient beings in the water, Italy, June 2014. Photo by Ven. Thubten Kunsang.

As Lama Zopa Rinpoche travels throughout the world, he always takes time to emphasize the activities we can do to benefit animals, which is one of Rinpoche’s Vast Visions for FPMT. In an excerpt from “Liberating Animals from the Dangers of Death,” Rinpoche offers the motivation we should hold as we work to help animals:

First reflect that all these creatures have been human beings, just like you. But because they did not practice Dharma and subdue their minds, they have been reborn as animals. Their present suffering bodies are the result of their unsubdued minds. We would not want their body for even a second. We get upset when we see some small sign of aging in our body, such as one more wrinkle on our face. So how could we stand to have the body of one of these animals? There is no way we could stand it.

Reflect on the fact that every one of these animals has been your own mother. When they were human beings, they were extremely kind in giving you your body and in saving you from danger hundreds of times each day. Later, they bore many hardships to educate you in the ways of the world; they taught you how to speak, how to walk, and how to behave. They also created much negative karma to ensure your happiness.

Not only has each of these animals been your mother, they have been your father, brother, and sister numberless times. We are all the same; we are all one family – it’s just that we have different bodies at the moment. We should feel as close to these animals as we do to our present family. We should hold them in our hearts.

Our grabbing ego made this body manifest, come out. However, instead of looking at it negatively, we should regard it as precious. We know that our body is complicated, but from the Dharma point of view, instead of putting ourselves down with self-pity, we should appreciate and take advantage of it. We should use it in a good way.