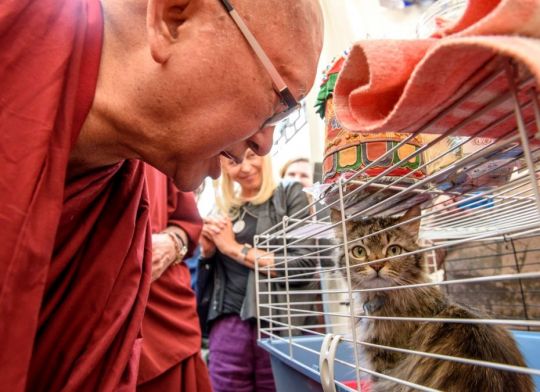 During Lama Zopa Rinpoche’s May-June 2017 visit to Russia, Rinpoche took an entire day—May 31—to bless animals. The animal blessing was organized and hosted by Save Tibet Russia. It was well attended, with hundreds of people and animals in attendance: cats and dogs of course, but also tarantulas, birds, rodents, and snakes. Cats from a local cat shelter were brought in as well, in hopes some homes could be found for them, and Rinpoche blessed all of the shelter cats. It was reported that several cats found new homes. 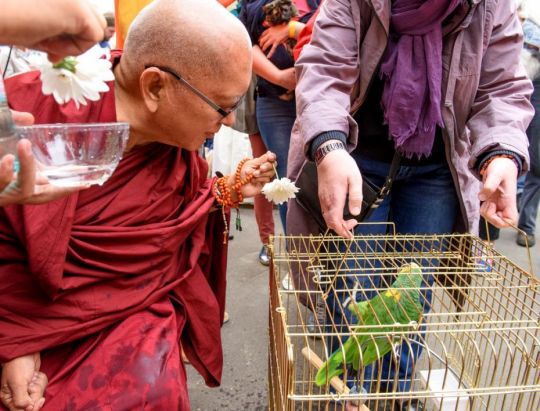 During the two hours Rinpoche spent at the event, he gave a short but compelling teaching on the whole path to enlightenment, as well as oral transmissions of mantras. He also recited mantras on a loudspeaker so that the animals would hear them from him and receive the transmission. The organizers had set up an altar just the way Rinpoche likes them, with the Kangyur, relics, and statues on it. After the blessing and the mantras, the animals were all taken around it to absorb its blessings. Then Rinpoche blessed all the animals with blessed water and relics he had with him, as well as a prayer wheel. The heartwarming event was livestreamed. 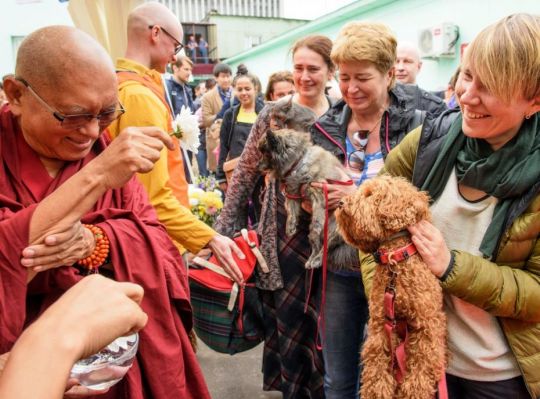 Early in his teaching at the event, Rinpoche explained the importance of both morality and charity, saying, “Why do we have a human rebirth? Why? Not animal rebirth, why do we have a human rebirth this time? Especially the perfect human rebirth … Why we are living in a house and have food, and clothing, and enjoyments, that is because in past life we made charity … The omniscient one explained in the teachings that from pure morality comes higher rebirth: … having a human shape of body, that comes from pure morality. And then all wealth, all enjoyments come from charity.” One form of charity is the giving of mantras and blessings. 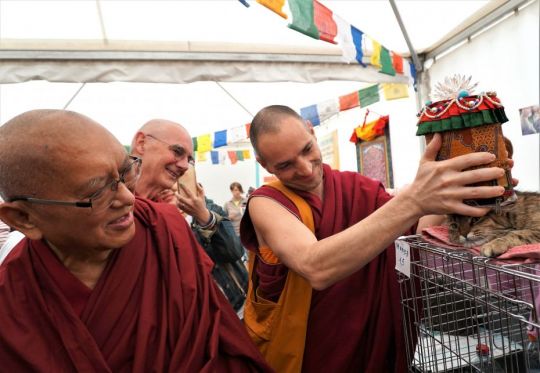 Rinpoche explained the benefits of blessing animals during his teaching, saying, “The Buddha explained all the benefits of mantra… The mantra is to liberate them from suffering. Just having heard mantras plants the seeds of a fully awakened mind, the total cessation of obscurations and the completion of realizations; mantras plant seeds for that.” 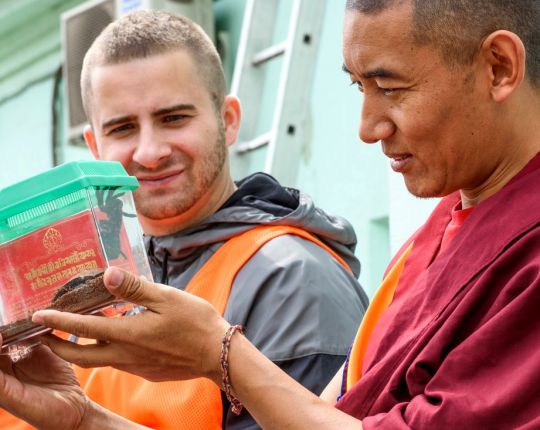 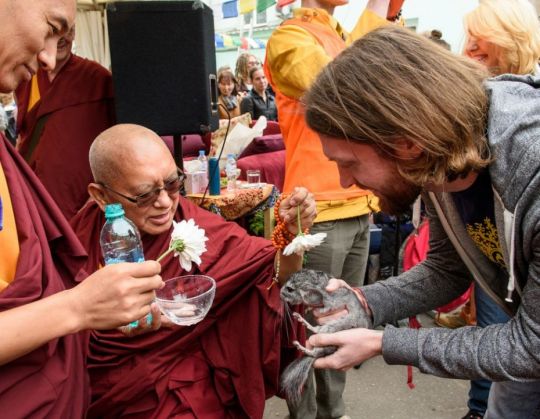 Rinpoche continued, saying, “[The mantra] plants seeds of enlightenment in their minds, the kind, precious mother dogs, cats, all these. You visualize Chenrezig like a mountain, a snow mountain, then nectar and beams are emitted with loving kindness to you, to your mother precious dogs, cats, all sentient beings, then to those who are sick, who are dying now, think that Chenrezig sends beams, nectar and beams, to you and to precious dogs, cats, and people who are sick or dying, and to all the six realm sentient beings. Think that.” 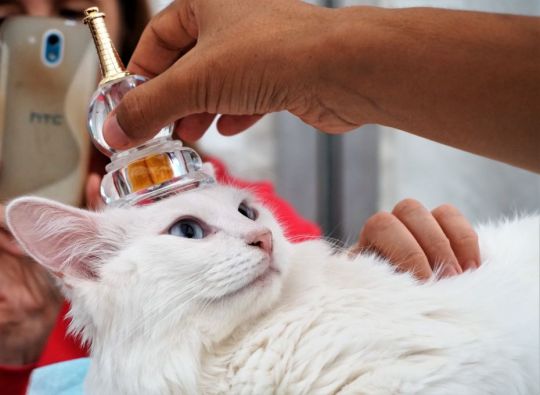 This blue-eyed beauty seems quite happy to receive a blessing, Moscow, Russia, May 2017. Photo by Ven. Lobsang Sherab.

During his evening teaching later, Rinpoche talked about the importance of caring for animals and being kind to them. He said that, as Buddhists having animals, it is important that we make their lives beneficial, giving them Dharma names, taking them around holy objects, blessing them with mantras, and so on. 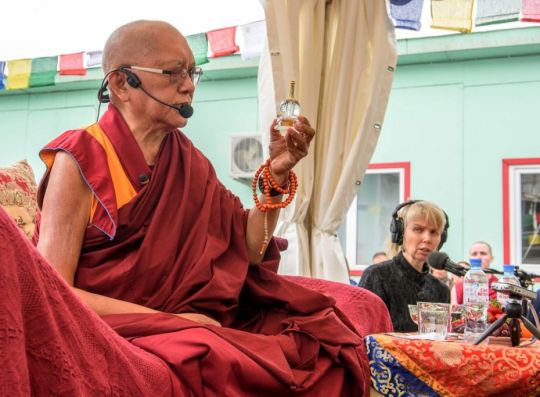 According to Rinpoche in his book Liberating Animals from the Danger of Death, sentient beings can experience purification of their karma and avoid the lower realms in the future as a result of such practices. Rinpoche says there: “When the Buddha gave teachings to 500 swans in a field, in their next life they were born as human beings. They became monks and all became arya beings, able to achieve the cessation of suffering and the true path. So the result is unbelievable, just by hearing Dharma words.” 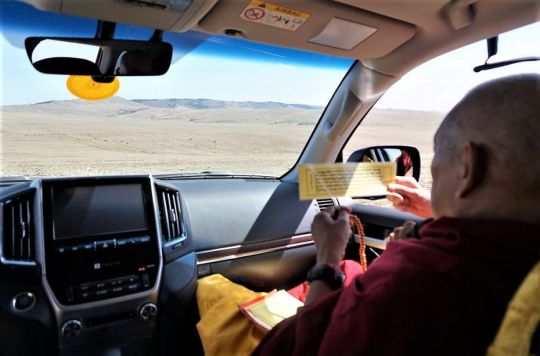 Lama Zopa Rinpoche blessing animals with mantras on the way to Darkhan, Mongolia, May 2017. Photo by Ven. Lobsang Sherab.

Benefiting animals is one of Lama Zopa Rinpoche’s Vast Visions for FPMT. Read about it here:
https://fpmt.org/fpmt/vast-vision/#animal
and: https://fpmt.org/tag/animals/

Get Liberating Animals from the Danger of Death as an e-book or in a print copy from the Foundation Store and support FPMT International Office:
https://shop.fpmt.org/Liberating-Animals-eBook_p_2334.html.