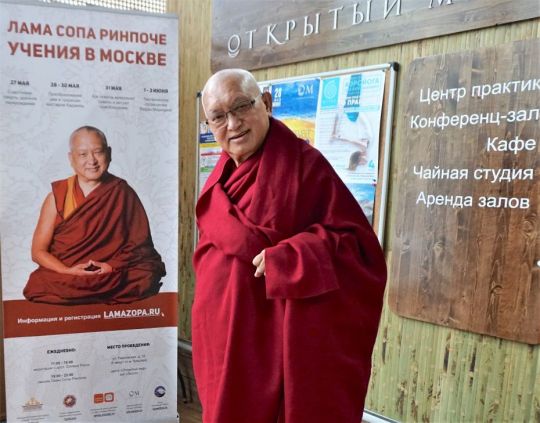 Lama Zopa Rinpoche at the teaching venue in Moscow, Russia, May 2017. Photo by Ven. Lobsang Sherab.

Lama Zopa Rinpoche gave a week of evening teachings in Moscow, May 27 through June 3. Ganden Tendar Ling, the FPMT center in Moscow, organized the teaching event, which was held in a large public hall and livestreamed.

Rinpoche began his first day of teachings on the topic of death and dying, drawing from his book How to Enjoy Death. The Russian edition of this book was officially launched during his visit.

Rinpoche ended up teaching on this essential topic for most of the three-day period, in place of the planned Kadampa teachings. Ven. Holly Ansett reported that this was “an exceptional teaching on integrating the five powers in this lifetime as well as at the time of death.” She added that on the last day he taught one verse from the Kadampa teachings. 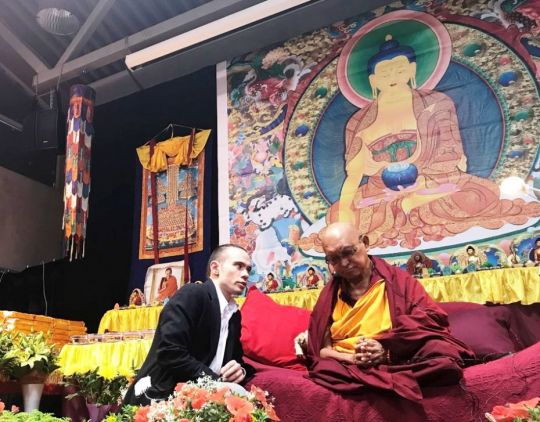 Lama Zopa Rinpoche during teachings in Moscow, listening to question from audience being translated from Russian to English, Russia, May 2017. Photo by Ven. Roger Kunsang.

Approximately 700 people attended the first day of teaching. On the second day, a residential retreat began, led by Ven. Olivier Rossi, Ganden Tendar Ling’s visiting teacher. This gave attendees an opportunity to go deeper into practice with Ven. Olivier, who led prayers and meditations, conducted Q&A sessions, and reviewed the material taught by Rinpoche. Between 500 and 600 people attended the retreat and the following days of Rinpoche’s teachings. 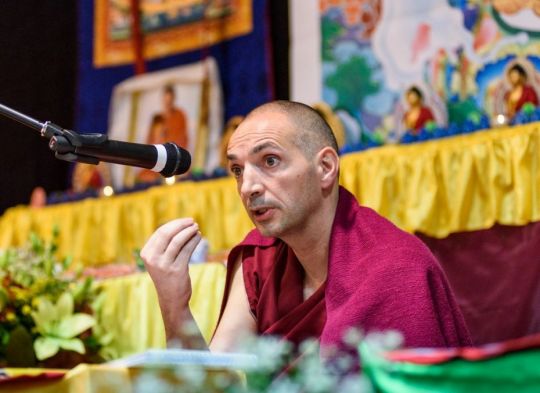 From June 1 to June 3, Rinpoche gave preparatory teachings and conducted a Medicine Buddha initiation. While Rinpoche was in Moscow, the city experienced a severe thunderstorm with hurricane-strength winds, which was responsible for the deaths of sixteen people. Hundreds of trees were blown down, and one smashed a car in front of the venue where Rinpoche was teaching. There were no injuries among those attending the teachings. 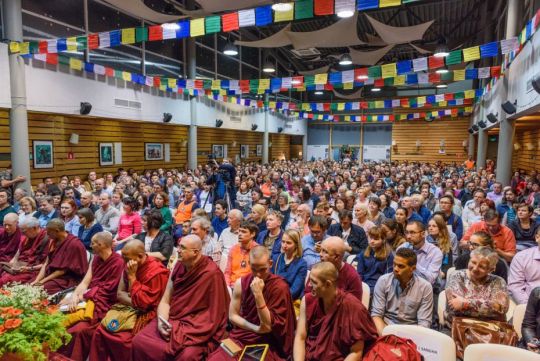 Rinpoche walked each day both ways between the venue where he taught and the Christian monastery where he was staying. It is a route where there are beggars, and Rinpoche made offerings to them every day with great respect, holding out his gifts with both hands. To each person, he requested that they use the money for food and not alcohol. Sometimes he offered food directly. The beggars quickly recognized Rinpoche and became happy every time they saw him. And people from the retreat also began giving to the beggars because Rinpoche, in one of his teachings, said how important it was to help people in need.

More than fifty volunteers contributed to making the week of teachings with Rinpoche a success. According to Ven. Holly Ansett, “The whole event was really well organized. Everything worked out very well—very successful, and very harmonious!” 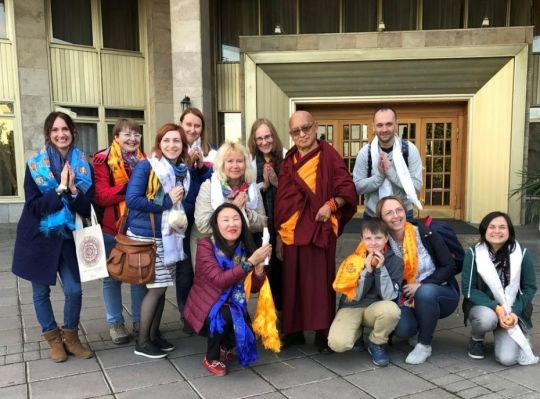 Rinpoche and students in Moscow, including Elena Bartanova from St. Petersberg, coordinator of Aryadeva Study Group, Russia, May 2017. Photo by Ven. Roger Kunsang.

Lama Zopa Rinpoche
is the spiritual director of the Foundation for the Preservation of Mahayana Tradition (FPMT), a Tibetan Buddhist organization dedicated to the transmission of the Mahayana Buddhist tradition and values worldwide through teaching, meditation, and community service.