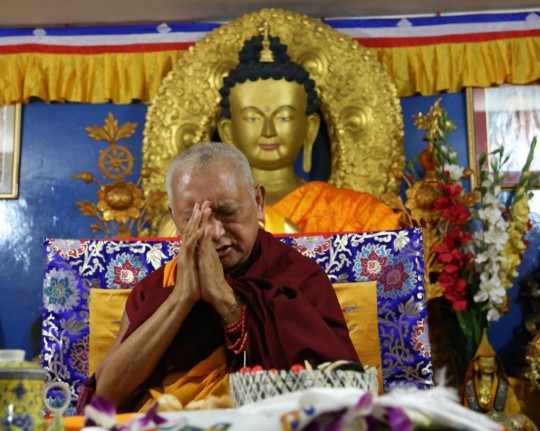 Lama Zopa Rinpoche gave teachings and an oral transmission of the Golden Light Sutra at Tushita Mahayana Meditation Centre in New Dehli, India, between January 25-31. Ven. Sarah Thresher, who was there, shared the following:

“Rinpoche gave five teachings on the Golden Light Sutra. Ven. Kabir Saxena requested the transmission a few days after Rinpoche arrived, and Rinpoche immediately agreed. We were all very happy because of the enormous benefits the sutra has. In fact, Rinpoche was giving the transmission when US President Barack Obama was in Delhi attending Indian Republic Day. The idea was that Rinpoche would start the transmission and continue whenever he passes through Delhi. So far we reached into Chapter 7, ‘The Four Great Kings.’

“Attendance was very good, despite the late hours, and Rinpoche preceded each day of transmission with a teaching. The gompa [at Tushita Mahayana Meditation Centre] has been newly painted and decorated and it was full with Indians, Westerners and Tibetans. Most of the people attending lived in Delhi and Rinpoche commented on the new surge of interest in Buddhism that is now taking place with more and more young educated Indians taking a serious interest in Buddhist studies as they look for answers to the problems they have in their lives.”