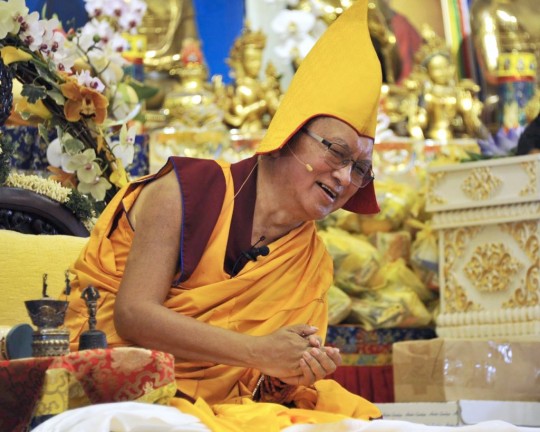 On Sunday, March 13, the official long life puja for Lama Zopa Rinpoche offered by the entire FPMT organization took place at Amitabha Buddhist Centre (ABC) in Singapore. About 750 people attended the beautifully arranged puja in person, with hundreds, if not thousands, more students participating from afar.

The long life puja was offered to Rinpoche to dispel any obstacles for Rinpoche this year. More than 100 representative from FPMT centers, project, services, and national and regional offices worldwide attended the puja and participated in the offering procession. In addition, 43 FPMT centers offered a local Lama Chopa puja with the prayer to the 16 Arhats for Rinpoche over the weekend and 24 centers gathered together to watch the live webcast of the puja in Singapore. (Some centers did both.) Plus more than 200 additional computers streamed the live webcast, bringing the puja into many, many students’ homes around the world.

Watch the YouTube video recording of the long life puja for Lama Zopa Rinpoche in Singapore. 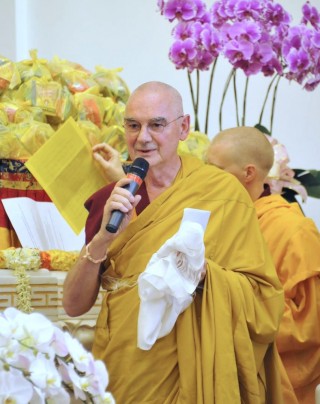 On behalf of the FPMT organization, Ven. Roger Kunsang, CEO of FPMT and assistant to Rinpoche, offered to Rinpoche 1,142,515 tsog offerings made for Rinpoche’s health and long life by FPMT centers, projects, services and study groups!

This far exceeded the advice from Khadro-la (Rangjung Neljorma Khadro Namsel Drönme) that prior to the puja, FPMT centers and students were to make 100,000 tsog offerings. Ven. Roger said that the tsog offerings were done during the 15 Days of Miracles and so the merit was multiplied 100 million times.

Geshe Ngawang Tenley, the resident geshe at Kurukulla Center, brought with him an unexpected message from His Holiness the Dalai Lama. Geshe Tenley met with His Holiness on March 10 in Boston and then convey His Holiness’ advice to Lama Zopa Rinpoche in person during the long life puja.

“While it goes without saying that Lama Zopa Rinpoche’s continuous waves of activities are of immense benefit to the Buddhadharma and countless sentient beings all over the world, it is important for Rinpoche to think of staying for a long time for the benefit of the Buddhadharma and all sentient beings,” His Holiness’ message said. (You can watch this at 1:25 in the YouTube video “Livestream of FPMT Lama Zopa Rinpoche in Singapore part 2.”)

Khadro-la, who was not physically present in Singapore, spontaneously composed a prayer for Lama Zopa Rinpoche the day before the puja. The English translation of the prayer was read for all to hear, while Rinpoche received the prayer in Tibetan. (Watch at 1:35 of the YouTube video.) 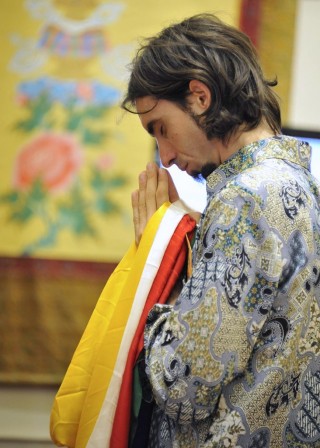 “We know how each and every action you do is dedicated to helping sentient beings—every thought, every breath; every sip of water you take is dedicated to sentient beings. We are so lucky to have you in our midst. You inspire us to be better people, and your presence gives us motivation to follow your example. You are constantly helping so many sentient beings from so many different dimensions. It is amazing to see your work in this world.

“Please stay with us for as long as it takes all sentient beings to reach enlightenment. We are willing to follow your advice and work hard to accomplish your dreams, which, of course, are always focused on benefiting in the greatest way, in this life and the next,” Ösel said as part of his praises for Rinpoche. (Watch at 1:40 of YouTube video.)

Then the praises for Rinpoche compiled by Ven. Robina Courtin based on submissions from many centers around the world was read by FPMT board member Paula de Wys. (Watch at 1:48 of the YouTube video.) The last verse of the praises, drawn from the Lama Chopa, was recited by everyone together:

You are the Guru, You are the Yidam,
You are the dakinis and Dharma protectors.
From now until enlightenment we will seek no refuge other than You.
In this life, the bardo, and all future lives,
Hold us with Your hook of compassion;
Free us from samsara and nirvana’s fears,
Grant all attainments,
Be our constant friend and guard us from interferences. 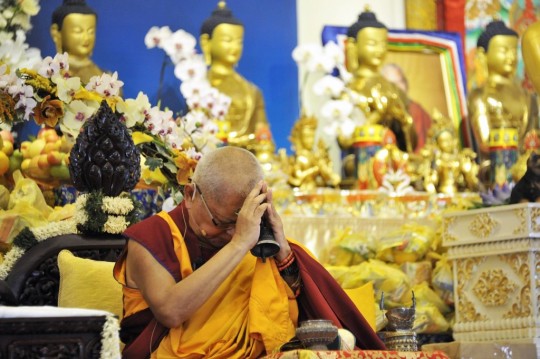 Lama Zopa Rinpoche was very humble during the long life puja, saying that he’s not of much benefit, but he does what he can. Ven. Roger offered to debate Rinpoche on the point “not being of much benefit.”

“To each of us, it seems like a huge benefit,” Ven. Roger said. He also made the request for Rinpoche to keep teaching a long, long time and to teach on lo-jong (mind training), which had been advised by Khadro-la.

Rinpoche took time to thank many people within the FPMT mandala for their decades of hard work and dedication. Rinpoche offered thanks to Ven. Roger, who has been serving Rinpoche for 30 years, recognizing Ven. Roger’s skill and kindness. Rinpoche also praised the peaceful development of FPMT.

Rinpoche thanked many others as well, including (but not limited to) Ven. Holly Ansett, who has served Rinpoche for 20 years; Khen Rinpoche Geshe Chonyi, ABC’s resident teacher and abbot of Kopan Monastery; Hup Cheng Tan, ABC’s director of 26 years; all the staff and volunteers at ABC; FPMT center directors, national and regional coordinators, and spiritual program coordinators; and all the people watching Rinpoche on the video stream. 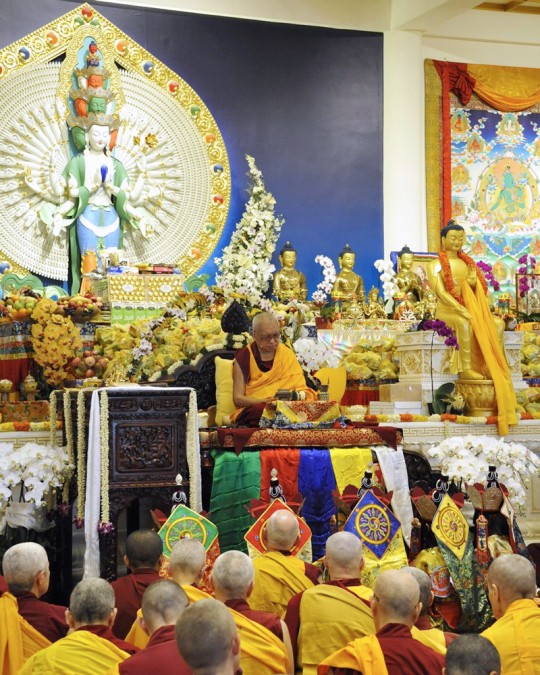 Other lamas and geshes present at the puja include Yangsi Rinpoche, founder of Maitripa College in the US; Lama Felix (Thubten Namdrol Dorje) from Singapore; Geshe Jampa Tsundue, resident geshe at Losang Dragpa Centre in Malaysia; and Geshe Jangchub. Plus more than 70 ordained Sangha attended the puja.

Rinpoche gave the appearance of being very touched by so many FPMT students coming together and making strong prayers. He also seemed extremely happy with the long life praise from Khadro-la and message from His Holiness.

The essence of the guru is wisdom: the perfectly clear and radiant state of mind in which bliss and the realization of emptiness are inseparably unified.