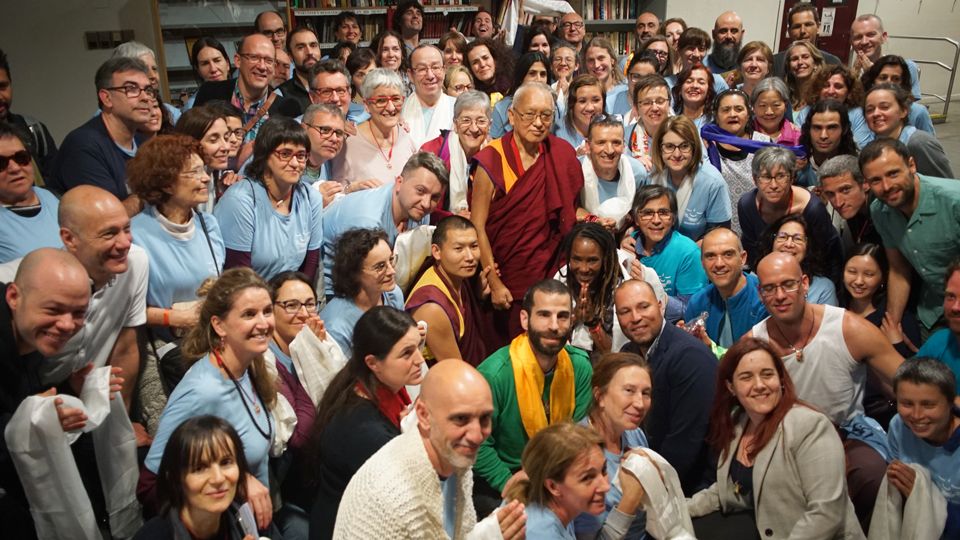 Lama Zopa Rinpoche with staff and volunteers for the teaching event in Madrid, Spain, April 29. Photo by Alexis Roitmann.

Lama Zopa Rinpoche taught in and traveled to a few FPMT centers in Spain in late April and early May. Kiko Llopis, FPMT Hispana national coordinator, shared this report on Rinpoche’s visit.

As he had promised in his previous visit to Spain in October 2018, Rinpoche returned to Madrid in April to confer the great initiation of the White Umbrella Deity (Dukkar). Rinpoche blessed us with his teachings, transmissions, and the longed-for initiation.

The event with Rinpoche was attended by more than 550 students. Nearly a hundred volunteers from the ten FPMT centers in Spain participated in organizing the event with enthusiasm and devotion. An added blessing during the teachings was the presence of Tenzin Ösel Hita—the recognized reincarnation of Lama Yeshe. Lama Yeshe co-founded the FPMT organization, together with Lama Zopa Rinpoche. 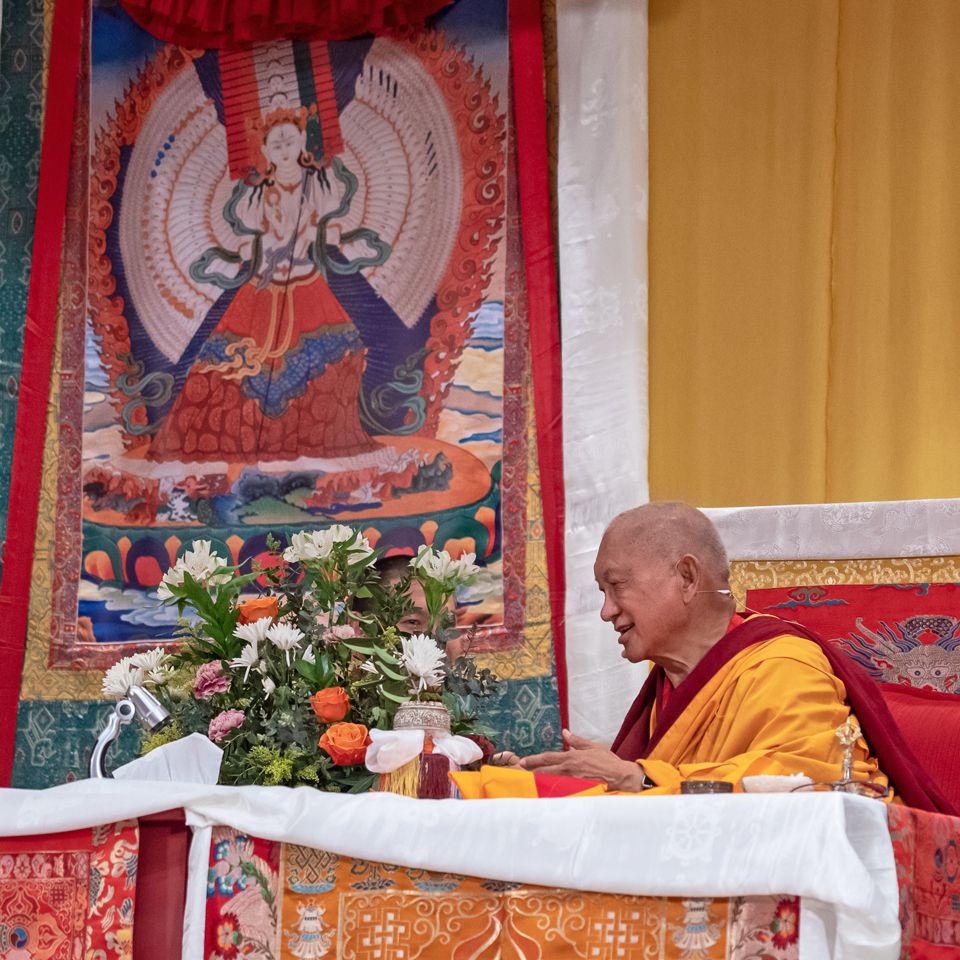 In addition to the benefit of his teachings, Rinpoche once again demonstrated his subtle but palpable quality of creating the conditions that manifest the best in the people around him—whether they are Buddhists or not, whether they know him or not. His love and compassion for all beings is a universal language that reaches everyone.

One example of this was the response of the staff at the General Union of Workers (UGT in Spanish) building, where the teaching event was held. UGT is one of the biggest unions in Spain. It has a Marxist origin and, by principle, is far from any religious affiliation. However, what began as a kind of curiosity for the colorful paraphernalia that accompanied the lectures of Rinpoche, who they saw as this “nice old man,” ended with a request from the UGT Head of the Administration for Rinpoche to bless her family. Plus, the maintenance staff ask about meditation, and the security staff gave us the facilities to hold a fire puja inside the building.

During his stay in Madrid, Rinpoche spent time in interviews with students and people with serious health problems. He also invited the ordained Sangha and members of the organization for dinner.

Rinpoche making prayers in the Retiro Park that any being that comes to the park will attain all the realizations up to enlightenment with (clockwise from bottom left) Ven. Roger Kunsang, Kiko Llopis, Miriam Woodnick, Juan Carlos, Ven. Topgye, Irina Hueso, and Ven. Holly Ansett.

There was also a wonderful afternoon stroll through the Retiro Park, which is one of the largest parks in Madrid, located near the city center. Rinpoche wanted to find a painter who sold paintings in the park. Rinpoche himself had given the painter several sacred images on his last visit, “not to sell them, but to exhibit them so people could benefit from seeing the images.” Rinpoche also blessed two large lakes in the Retiro, and all the aquatic inhabitants in the lakes, thus giving another example of how to make the most of a walk in the park. 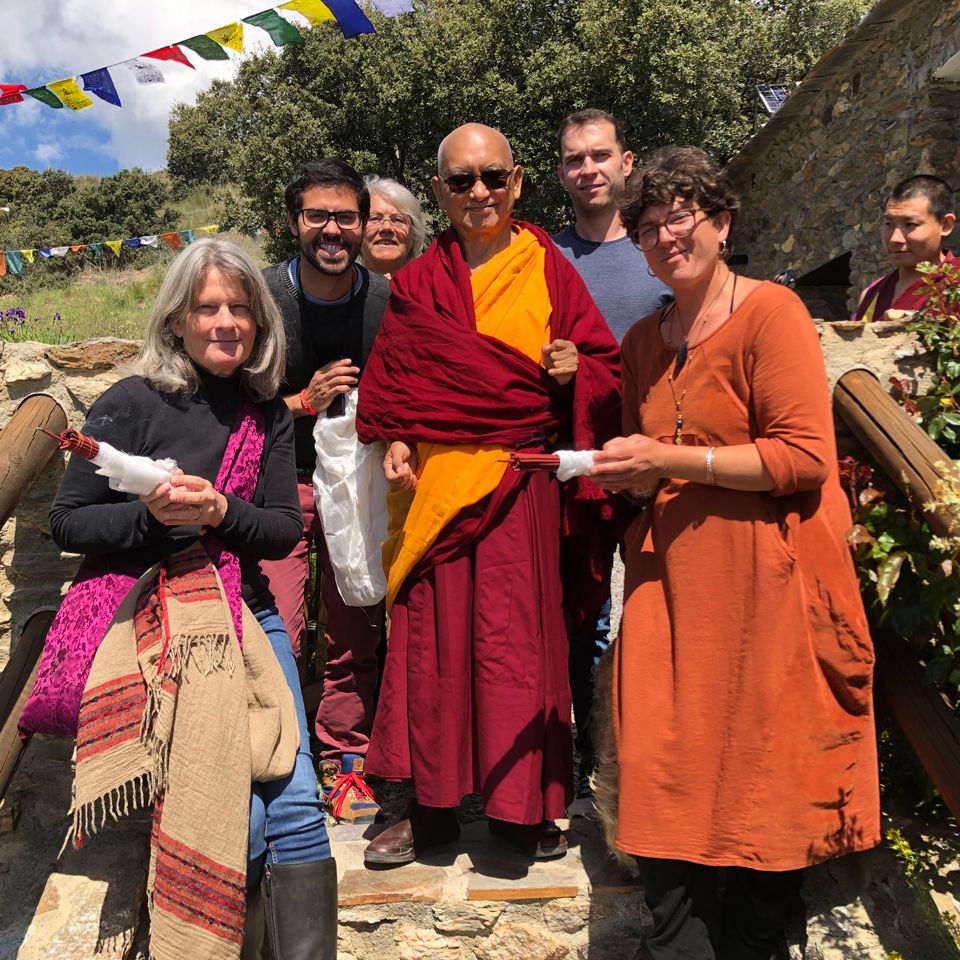 In addition to coming to Madrid, Rinpoche also visited three other FPMT centers in Spain. Rinpoche calls O.Sel.Ling Centro de Retiros, the FPMT retreat center located in the southern province of Granada, “Oseling pure land.” Rinpoche did extensive practices there and blessed the new gompa and sacred objects together with Geshe Lamsang, the FPMT resident teacher at Centro Nagarjuna Valencia. We are very excited because Rinpoche said it would be beneficial to return to O.Sel.Ling to give a retreat on the Thirty-Seven Practices of the Bodhisattva.

At the FPMT center Nagarjuna C.E.T. Granada, Rinpoche gave teachings and dined with some members of the center. 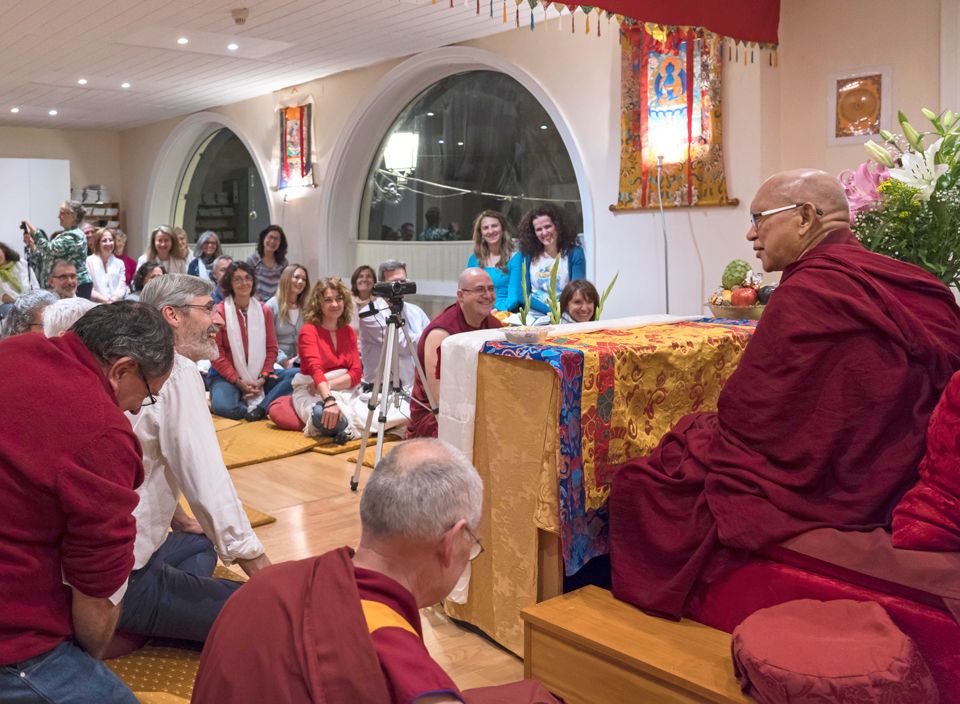 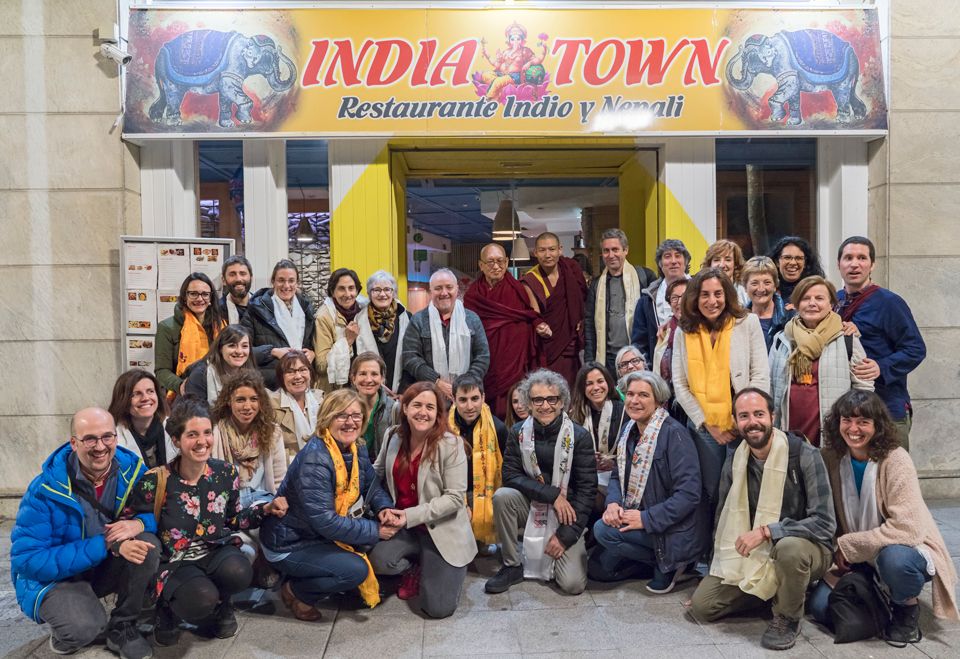 Lama Zopa Rinpoche with students from Centro La Sabiduría de Nagarjuna, the FPMT center in Bilbao, after having dinner with them, Bilbao, Spain, May 2019. Photo by Ven. Lobsang Sherab.

Our precious guru left behind a ray of joy, gratitude, and enthusiasm in Spain, and we dedicate each day for him to visit us again very soon.

Find complete videos of Lama Zopa Rinpoche’s recent teachings, including teachings from the April 2019 teachings in Madrid and the May-June 2019 Vajrayogini retreat at Institut Vajra Yogini in France:
https://fpmt.org/media/streaming/teachings-of-lama-zopa-rinpoche/