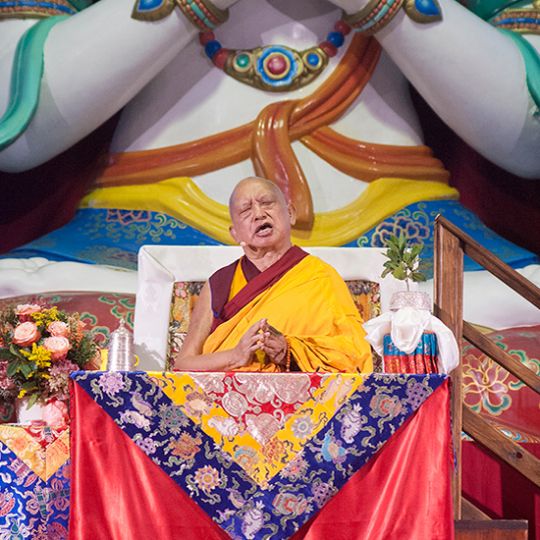 Rinpoche talked about how we have to realize how fortunate we are that we’ve met with Mahayana Buddhism and that we shouldn’t take for granted our perfect human rebirth and meeting Mayahana Buddhism and great teachers like His Holiness the Dalai Lama. Rinpoche continued that with so many problems in the world—political, environmental and so forth—we are all desperately looking for a solution. “But the solution is inside our mind,” Rinpoche said. 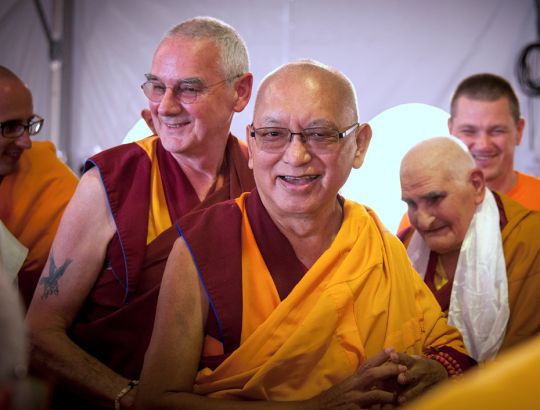 “So it is incredible what we are doing here, that is answer for everything, answer for the world and answer for all your problems, to be free from samsara. … And not only that, to achieve buddhahood, the total cessation of obscurations and completion of all the realizations.”

Rinpoche offered the observation that we get so busy with studying, but then, when something happens, we are not prepared. Without correctly practicing, Rinpoche warned, we may be worse than someone who has never met the Dharma.

Later in the teaching Rinpoche said that we should take inspiration from Geshe Chekawa, who was happy when his body was suffering, because he was destroying his self-cherishing. Rinpoche told the retreatants that it is our choice and that problems do not exist from their own side, so that the same experience can be for us happiness or suffering. He encouraged us to cherish the one who abuses us, they are so precious and will lead us to enlightenment.

Lama Zopa Rinpoche’s daily teachings at the 100 Million Mani Mantra Retreat in Italy are being broadcast live over Facebook and YouTube:
https://fpmt.org/media/streaming/lama-zopa-rinpoche-live/

You can watch recordings of previous teachings by Lama Zopa Rinpoche online:
https://fpmt.org/RinpocheNow/

Read advice from Lama Zopa Rinpoche about the benefits of Chenrezig Practice:
https://fpmt.org/teachers/zopa/advice/chenrezig-mantra-and-practice/