The Yoga of Going to Sleep 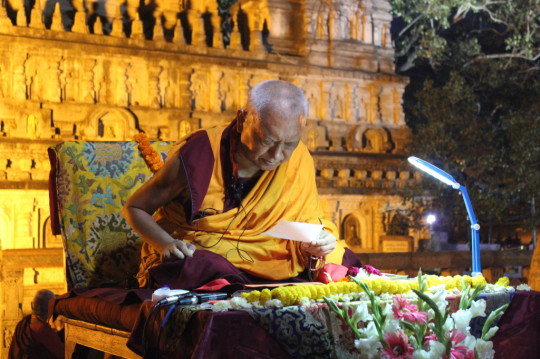 “When you go to bed, when you go to sleep … this is what you are about to do when you get back to your room. Or maybe here! Maybe, if I continue a little bit, then maybe here!” Lama Zopa Rinpoche joked during the 41st Kopan course in December 2008.

“It is mentioned by Lama Tsongkhapa that when you go to bed, first wash your feet. I think washing the feet helps the mind to be fresh, to be not heavy, not sleepy, where you can’t wake up. The mind is clearer.

“That’s what mentioned in the lam-rim teachings. It’s said that you should be like a deer living in the forest. It doesn’t have a house and there are many enemies, so when it sleeps, it is a very light sleep, it keeps its ears up. It is a very light sleep because it has to be careful. It’s explained in the teachings like that. It means to not waste your life but instead to get up early in the morning to be able to begin your practice.

“Because you went to bed remembering the Buddha’s position, even when you go to bed, you don’t forget the Buddha. That helps. When you do that every night, that helps when you die. One day when you are in the situation where you suddenly die, or even if you are gradually dying, because you have done this all the time, it is easy to remember the Buddha at that time, and you don’t get reborn in lower realms. You’re totally safe if you remember the Buddha at that time. The mind is always in virtue, it is never separated from virtue, from Dharma, so it helps with that. …”

Lama Zopa Rinpoche gives more advice on sleep yoga (see Lecture 9) in the transcripts of the 41st Kopan course (http://bit.ly/41st-kopan-course), lightly edited by Gordon McDougall and made available by the Lama Yeshe Wisdom Archive. This excerpt was further edited by Mandala for inclusion on FPMT.org.

Learn more about Lama Zopa Rinpoche, spiritual director of the Foundation for the Preservation of Mahayana Tradition (FPMT), and Rinpoche’s vision for a better world. Sign up to receive news and updates.