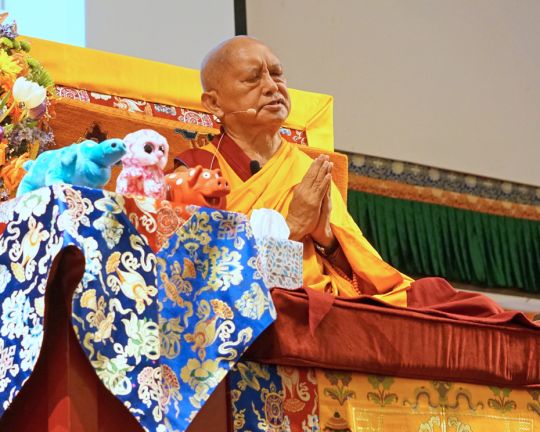 Lama Zopa Rinpoche at the Light of the Path retreat, North Carolina, US, September 2017. Photo by Ven. Lobsang Sherab.

On September 15, a long life puja was offered to Lama Zopa Rinpoche at the conclusion of the Light of the Path 2017 retreat, which was organized by Kadampa Center in North Carolina, US. During the puja, Merry Colony, a long-time student and current director of Milarepa Center, offered the following praise to Lama Zopa Rinpoche.

From the vast sky of dharmakaya space, like a star appearing in the light of day, the most rare of fortunate events ripened when in the Himalayan village of Thame, Nepal, you appeared in this human form. Before you could even walk, you showed all the signs of being the unmistaken incarnation of the great Lawudo Lama meditator, Kunzang Yeshe. What a great auspiciousness!

As a child you thought to go to Mindroling Monastery in Tibet, but instead your uncle Ngawang Gendun brought you to the monastery of Domo Geshe Rinpoche. Thus, you ended up in Buxa after fleeing Tibet. While in Buxa, the monk Chumbi brought you to the room of Lama Thubten Yeshe and a karmic bond that would come to shine a great light on the dark land of the West was rekindled. What a great auspiciousness!

When Zina [Rachevsky] first requested Lama to teach in Bodhgaya, it was you, Supreme One, who accepted the request. Inspired by Kachen Yeshe Gyaltsen, you taught the first five-day course, which quickly grew to become a biannual event at Kopan. Now, forty-five years later, you have given the keys to liberation and enlightenment to tens of thousands of students at Kopan alone. What a great auspiciousness!

When the world turned dark on Losar morning in 1984 and Lama Yeshe passed away, you immediately took the helm of the FPMT organization and then traveled without break for so many years, steering the fledgling group of forty centers to its current status of more than 160 centers, projects, and services. Impeccably following the advice of His Holiness, you protected the centers and students from danger, becoming the mother, father, and protector of us all. What a great auspiciousness!

As the organization grew, you invited the most highly educated of Sera geshes to teach so that students everywhere could learn the great philosophical texts, while always ensuring that practice and the heart of service remained at the core. Like this, you initiated FPMT’s Basic Program and grew the Masters Program, paving the way for a new generation of well-educated and well-integrated teachers to serve the organization. What a great auspiciousness! 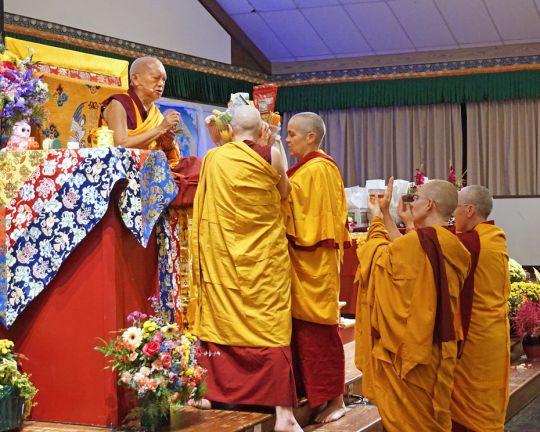 Lama Zopa Rinpoche during a tsog puja at the Light of the Path retreat, North Carolina, US, September 2017. Photo by Ven. Lobsang Sherab.

To help secure the longevity of the Sera monastic education, you established the Sera Je Food Fund, enabling the monks to focus on their studies and your students to create vast skies of merit. Likewise, you have overseen the continuous growth of Kopan Monastery and Khachoe Ghakyil Nunnery and have rebuilt monasteries vulnerable to degeneration in Mongolia, and in Tsum and Jailsa in Nepal, which are now flourishing. What a great auspiciousness!

Your vast vision to bring holy objects to every corner of the world is without equal. Exceeding the wishes of Lama Yeshe, two great statues of Maitreya Buddha will now be built in India, while great prayer wheels, stupas, Guru Rinpoche statues, giant thangkas, and other holy objects are going up around the world. Due to Rinpoche’s limitless compassion, even the animals and those without faith can now create merit, helping to bring peace to the world and balance to the elements. What a great auspiciousness!

Due to Rinpoche’s vision of benefiting sentient beings as vast as space, the Sanghata Sutra, the Sutra of Golden Light, the Vajra Cutter Sutra, and others are now recited regularly throughout the whole world; many thousands of nyung nä retreats have been completed; and many 100 million mani retreats and so many individual lamrim and deity retreats have been done. And due to Rinpoche’s indescribable kindness and guidance, we now have everything we need to help ourselves and others at the critical time of death. What a great auspiciousness!

Your help for children, the poor, the sick, and the elderly manifests in an ever-expanding circle of schools, homes for the destitute, clinics, and an eye hospital in Tibet. For so many animals bound for slaughter, you have created safe havens. Most recently, due to your great concern for the elderly who have been left alone in your homeland, an old-age Dharma home will be built where Sherpas destitute of help can live out their lives with Dharma and in peace. What a great auspiciousness!

But greatest of all your holy deeds are the unmatched, unexcelled, and unending treasury of Dharma teachings that Rinpoche gives every moment, with every breath, and with every movement of your holy body, speech, and mind. Having crisscrossed the globe continuously for more than forty-five years, you have given teachings like no other on the heart of the path—how to correctly devote to the virtuous friend—so that we may receive the nectar blessings needed to actualize the path. You have shown us how to carry out all our practices in the most extensive way to create the most extensive merit of virtue and merit of wisdom. You have shown us how to meditate precisely on the subtle points of emptiness so that we may cut the root of our ignorance. And by your peerless faultless example, you have shown us perfectly how to take the essence from every moment of our unfathomably perfect rebirths and make our lives most beneficial for others. What an indescribable auspiciousness! 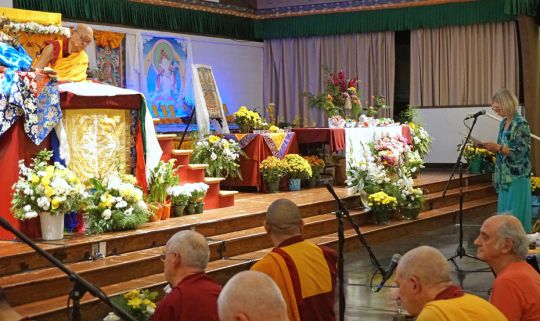 Merry Colony offering praise to Lama Zopa Rinpoche during the long life puja at the Light of the Path retreat, North Carolina, US, September 2017. Photo by Ven. Lobsang Sherab.

And yet, despite Rinpoche’s atomic energy and passion to blast us out of samsara, we are still children often lost and confused, in need of your continual guidance and care. Guru Chenrezig, Vajradhara, hear the prayers of your disciple children. You are our sole refuge protector and savior, our light of the path. Don’t ever leave us. Until we attain your enlightened state, hold us in your compassion and guide us.

Having shown us how to open the door of Dharma, we will work diligently to give up the meaningless affairs of this life. Having opened our hearts, we will work continuously to benefit living beings. Having opened our wisdom eye, we will persevere in our analysis of how things exist. Having saved our lives, we will dedicate ourselves to becoming most quickly like you so that our every action will be suffused with bodhichitta, our every breath most meaningful for others. May our pure practice be the cause for you to stay with us forever.

Guru Chenrezig, Vajradhara, hear the prayers of your disciple children. You are our sole refuge protector and savior, our light of the path. Don’t ever leave us. Until we attain your enlightened state, hold us in your compassion and guide us. May all auspiciousness continue to ripen.

Written and read by the devoted disciple Merry Colony at the conclusion of the Light of the Path retreat in Black Mountain, North Carolina, September 15, 2017.

Participants of the Light of the Path retreat, North Carolina, US, September 2017. Photo by Ven. Losbang Sherab.

The 100 Million Mani Retreat at Istituto Lama Tzong Khapa in Italy begins on October 4! You can watch Lama Zopa Rinpoche teach live on YouTube and Facebook. For links and details:
https://fpmt.org/media/streaming/lama-zopa-rinpoche-live/

In the lam-rim, there’s some advice on how to get up early in the morning without being overwhelmed by sleep. Before getting into bed the night before, wash your feet while thinking of light. Try it; it works.