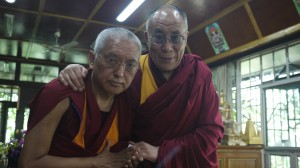 Rinpoche with His Holiness the Dalai Lama. Photo by Ven. Thubten Kunsang

Rinpoche is in retreat which started about 10 days ago. Prior to the retreat, Rinpoche met with His Holiness the Dalai Lama. It was a relaxed meeting (meetings with His Holiness in recent times are quite brief and to the point because of the very demanding schedule that His Holiness has, but, the occasional more-relaxed appointments do occur) and His Holiness expressed his happiness with Rinpoche and the activities of FPMT.

His Holiness also expressed concern about Rinpoche’s health and said that Rinpoche should now start to take Tibetan medicine for diabetes and blood pressure. His Holiness asked his own doctor (a Tibetan nun) to see Rinpoche. Later, Rinpoche also went to see His Holiness’ Western-trained Tibetan doctor. Both prescribed medicines Rinpoche is now taking (with special diligence because His Holiness said he should take care of his health).

I think Rinpoche is taking his health more seriously now and putting in more effort into exercising, taking medication and resting … I hope.