The Moving Dance of Lamas 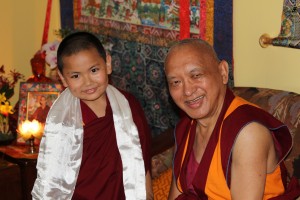 With the cutest shy smile and deep, beautiful dimples he says, “To say hello.” (The incarnation of Geshe Lama Konchog is 8 years old and small for his age, but smart as the ace of spades!)

Lama Zopa Rinpoche says quietly to me, “I think he is a little worried about me and just coming to check.”

They chatted between themselves for an hour and looked at a short video of Maratika, the cave where Guru Rinpoche achieved immortality. The big rinpoche and the small rinpoche (did I mention who is as smart as the ace of spades?)

A few days later Phuntsok Rinpoche came to see Lama Zopa Rinpoche again. He replied this time, “No reason, just want to see.” He just wanted to say hello and make an offering. Lama Zopa Rinpoche gave the khata back with one hand carefully over the head of the smiling little rinpoche and then asked me to double the money in the offering envelope and give it back to Phuntsok Rinpoche.

The little rinpoche, smiling, asked if his friend can come in and make an offering. Rinpoche said OK. Then, this little monk – even smaller and so close to the ground! – came in and offered a khata and offering to big rinpoche. Rinpoche asked me to double the offering and he gave it back to the very small monk. The two children both smiled and left after a little conversation. 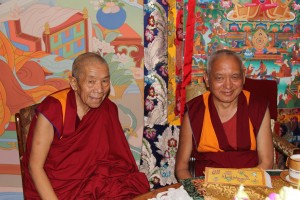 I went up and explained to Rinpoche, “OK.”

Rinpoche started to do some preparation and then in the next minute Lama Lhundrup had come upstairs and was waiting outside, respectfully saying, “Rinpoche can’t come down, I must come up.” (Keep in mind that Lama Lhundrup’s cancer is quite advanced.)

Then proceeded a beautiful dance – the movement between two gracious lamas: one having advanced cancer, the other having had a stroke not long ago, the right side still not working. They both acted humbly, graciously and quietly; the feeling was very calm and peaceful. Awkwardly, Rinpoche tried moving his text and with slurred speech gave the lung with Lama Lhundrup sitting opposite slightly bent over, very still and quiet. It didn’t take long. And then they both parted.