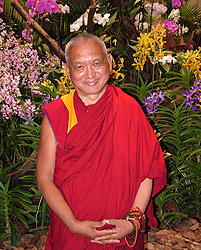 For the detailed schedule and details of how to contact the center and book for these events, please go to https://fpmt.org/teachers/zopa/schedule/

Rinpoche is currently in Taiwan, where Rinpoche is teaching and giving initiations including Yamantaka and Most Secret Hayagriva, till April 8th.

Rinpoche’s next teachings are scheduled in Singapore between May 7th – 21st, followed by teachings in Malaysia (including a short Tara retreat) between May 23rd – June 4th.

It is likely that Rinpoche will teach at His centers in Mongolia and Hong Kong in September, and then will teach at the Kopan November course towards the end of this year.

Rinpoche is scheduled to teach at Root Institute, Bodhgaya, India in early January 2008.

As soon as we have more details about Rinpoche’s teaching schedule we will let you know. 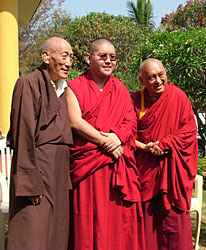 LUNGS AT SERA JE
During a recent visit to Sera Je Monastery, Rinpoche and a group of high lamas, including HH Ling Rinpoche, spent a month receiving the lungs of the texts of Kachen Yeshe Gyaltsen. Lama Zopa Rinpoche requested this very rare and important lineage and His Holiness has said that these and the lineage of the great 5th Dalai Lama are very important to be preserved. Khyongla Rato Rinpoche is the lama who gave the transmission and passed on the lineage, he is 84 yrs old. This event was hosted by Osel Labrang. 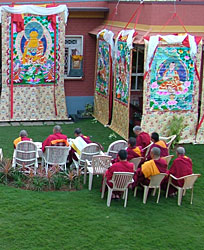 Photographer Ven. Roger Kunsang
RINPOCHE ORGANIZES THE LAMAS
Rinpoche took every opportunity to utilize the time of the Lama’s attending the lungs at Sera Je. Nearly every day as they finished the lungs, Rinpoche would have something to request them to do, like blessing these beautiful appliquéd thangkas which were used to decorate the stage for His Holiness’s teachings in Mumbai. The thangkas are of the most important Indian pandits of Nalanda Monastery.
PROMOTIONAL VIDEO OF RINPOCHE FOR CENTERS

We have put up in the FPMT Affiliates Area a brief 2 minute film of Rinpoche teaching, created by Christina Lundberg, which can be used by centers to introduce and promote Rinpoche. It is an ideal length to be used as promotional material to send to local TV stations to publicize a visit by Rinpoche. /affiliates/exclusive/resources/streaming.php

A collection of touching, humorous and illuminating stories about the endless activities and efforts of Lama Zopa Rinpoche, including the koala and millipede sadhanas and extensive offerings of one’s French fries.
Anecdotes » 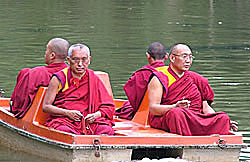 Kyabje Kirti Tsenshab Rinpoche, a great yogi with skies of qualities, who unfortunately recently passed away. Rinpoche was not only a great scholar of the words of the sutras and tantras, the extensive Buddhadharma, but a great yogi who had attainment of the whole path to enlightenment.
More »

NB: The FPMT Education Dept will be putting out a new version of the Long Life Puja with this incorporated later this year.