Stupa to Minimize Harm from the Elements

UPDATE 2016: In 2012 Lama Zopa Rinpoche observed that the West Coast of the United States was in danger of suffering earthquakes and tsunamis. Rinpoche consulted with Khadro-la and a stupa was recommended to be built as soon as possible. Khadro-la identified the exact place the stupa needed to be built to have the most effect. There were insurmountable obstacles to securing the exact land. Due to these difficulties Rinpoche advised an incredible amount of mantras and practices to be done and also some extremely extensive pujas.

Once the practices were completed and also due to the obstacles to secure the exact land for the stupa, Rinpoche indicated that this stupa is no longer a priority. Rinpoche is still very interested in building other holy objects that can have an effect on possible earthquakes and natural disasters.

All funds offered to the Stupa to Minimize Harm Fund will be used for holy objects which Rinpoche is recommending for the pacification of earthquakes and natural disasters.

History on the Stupa to Minimize Harm Project 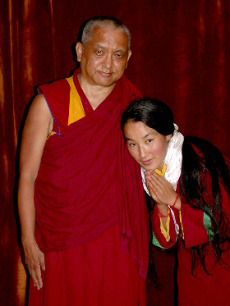 After receiving news that scientists were forecasting a huge earthquake and possible tsunamis on the West Coast of the United States, Lama Zopa Rinpoche asked Khadro-la what could be done to minimize the damage to people and property.

In response, Khadro-la had visions of a particular landscape and a stupa that could be of benefit. On hearing this, Rinpoche took on the responsibility to actualize this stupa, for the benefit of those who could be affected by any natural disasters. It was determined that Khadro-la would come to the USA in 2012, in order to locate the land from her visions. As she was flying into the United States, landing in California, she says, “I fell asleep. Then all of the sudden I woke up and looked through the airplane window and saw the area that I had had a vision of before when I was in India. So later on, we investigated that area and found that it is on government land, like in a park.” 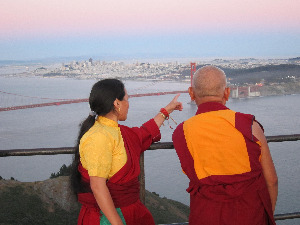 Khadro-la with Lama Zopa Rinpoche identifying the exact location of the stupa in San Francisco, CA. June 2012.Rinpoche commented, “We do have a way that we can reduce the effect of a big earthquake on the west coast of the USA and therefore it is wise to do something about it before it is too late. Otherwise it is like trying to prevent your death after you die.”

Khadro-la also explains, “To be clear, the building of the stupas will not stop the earthquakes and tsumanis. They are just to benefit a little bit for sentient beings. It’s not to fight against the forces of nature or eliminate all those things. Rinpoche asked me to help. Since Rinpoche is always thinking about benefiting others at all times, it is all being done in this light.”

The above quotes from Khadro-la are from an interview with Mandala magazine, where she discussed this project, the history and her vision in more detail.

This particular project is not currently considered an urgent priority but we are still collecting funds for stupas to pacify earthquakes.

Benefits of Building or Contributing to the Building of Stupas

According to Lama Zopa Rinpoche, “Building stupas helps develop so much peace and happiness for numberless sentient beings. As a result, wars, disease, and desire will all be pacified. Instead of feeling hopeless, people will gain courage.”

For more information about the benefits of stupas, what is needed to build them, and recommended practices related to these amazing holy objects, please explore this resource guide dedicated to the topic.