Life on the Road with Lama Zopa Rinpoche

Two days before we leave: All of the Hayagriva retreatants were able to have an audience with His Holiness the Dalai Lama. His Holiness talked to the group for 30 minutes and about 120 people posed for a group photo. During the same meeting, Rinpoche introduced Ribur Rinpoche’s reincarnation to His Holiness. His Holiness seemed  pleased to meet him, performed the haircutting ritual and offered a Buddha statue to the young tulku.

Last day: People everywhere are trying to see Rinpoche.  So many things to pack, many things to do last minute, then Rinpoche suddenly arranges to have Dagri Rinpoche and Jhado Rinpoche come to discuss the necessary mudras for the Mitukpa ritual (which are almost unknown).  Rinpoche said it is very important to get this clear otherwise we cannot do this very powerful retreat. So … all appointments and activities are canceled and the entire last day is focused on this. It ends successfully.

Day of departure: The last night is an all nighter … Rinpoche always tries to squeeze everything in at the last minute! People, texts, calls, everything happens! People are everywhere … some have fallen asleep waiting to see Rinpoche. Then always … will we catch the flight? Will we make it is time? Rinpoche just checked and there are obstacles for the flight.  Cancel the flight or have pujas done? Pujas it is … a quick call to Lama Lhundrup for pujas at Kopan. Continue with packing. Rinpoche wants to do more things! I remind him we don’t have time but Rinpoche doesn’t seem to be the slightest bit anxious about time and just wants to do more to benefit others.

Meanwhile, the teenage monkeys are trying to steal the washing … and they won’t give up!

Suddenly, Dagri Rinpoche arrives with Namgyal Monastery’s umze who will lead the puja for Rinpoche! Sangpo and a few others are rushing to get breakfast. Kunsang, flies off with his audio equipment and zen dragging along the ground, half asleep.

Quite a large tribe of monkeys appear at the door blocking the entrance.

With breakfast finished, preparation for puja starts. The long life initiation starts at 8 a.m. when Rinpoche arrives. It has to finish by 10 a.m. because the Hayagriva retreat group has an appointment with His Holiness the Dalai Lama. Rinpoche hasn’t done White Tara long life puja before, but it goes quite smoothly with the help of the Tibetans and with  lots of help from Tushita staff and volunteers in the background – they have done an excellent job. After the long life puja, everybody immediately rushes to get ready to walk down to His Holiness’ temple for the audience. 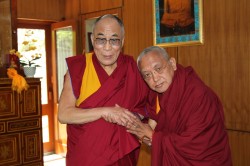 beautifully framed picture of the Potala in 3D; Lama Tsongkhapa statues and his two main disciples (from Ven.Pemba) and much more….

We manage to load everything into the jeep and balance all the gifts as we rush down the hill. With us in the jeep is the young, 4-year-old reincarnation of Ribur Rinpoche, his father and Oser Rinpoche.

We arrive at His Holiness’ Private Office and meanwhile there are 120 Hayagriva retreatants going through the slow but detailed security process. We get through that and we are inside the temple grounds waiting for our appointment. 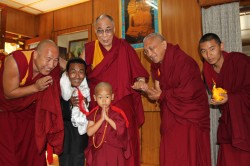 Haircutting ceremony with His Holiness and Ribur Rinpoche's reincarnation

His Holiness moves very quickly through several other rooms that have different groups of people waiting in them. These groups briefly meet His Holiness and photos are taken all in a matter of minutes. Then His Holiness comes into our audience room and gives a very, very nice talk to the retreatants for about 30 minutes. His Holiness departs, giving Rinpoche a friendly slap on the back. 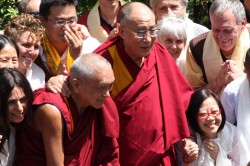 As they leave, the retreatants are given blessed pills and a poster of the 17 Nalanda pundits. Everybody is very, very happy.

Rinpoche rushes back to attend a benefactor’s dinner and then is interviewed about FPMT on video. This was set up by the Tibetan information minister.

Midnight Hour and all is Well

It is midnight….Rinpoche is relaxed and quietly dictating letters to students about practice, I am talking on the phone to International Office, Sangpo is organizing the gifts that Rinpoche will offer to His Holiness the Dalai Lama, Kunsang is just finishing on the computer with an audio of Rinpoche’s teachings.

6 a.m…. The preparations for the long life initiation are well underway. White Tara Long Life Puja will be offered to Rinpoche. Students are still in the gompa (they’ve been working all night) doing the last preparations and decorations. The teenage monkeys are asleep.

At 1:30 a.m., Rinpoche  finished teaching how to do the visualization for the fire puja of Most Secret Hayagriva.

The retreatants started reciting the sadhana at 5 a.m., and at 7:30 a.m., Rinpoche joined them to conclude the retreat with certain rituals.

The teenage monkeys have been quiet today….

Rinpoche’s long life puja starts early tomorrow, 6 a.m., and preparations are being made.

Rinpoche is currently doing prayers and not talking. Occasionally, he sends a hand written note with instructions for the next activity to be done. And, as usual, people have been eager to schedule an appointment with Rinpoche before he leaves!

It is 3 a.m. and I have been helping Rinpoche write letters to his students. One letter has been done in three stages, and we are currently on the fifteenth page….

It is now 7 a.m. in Tushita Meditation Centre’s gompa on the last day of the three-week Hayagriva retreat. Rinpoche has arrived with Dagri Rinpoche and Keutsang Rinpoche to attend the all-day Hayagriva Tsok Kong, a very extensive Hayagriva puja.

Meanwhile, a lot of teenage monkeys are partying outside in the monkey amusement park that Rinpoche has created. One has been wearing what’s left of Rinpoche’s underskirt up in a tree.

Every day during the Hayagriva retreat, Rinpoche has been offering a party to the monkeys. Rinpoche has provided the monkeys with a very nice setup. Three big basins serve as their baths and swimming pools. They’ve been given lots of different colored plastic balls that they can throw around and play with. Also, there are lots of plastic bottles filled with water – perfect for playing with and punching. Rinpoche throws food out to them daily:  chocolate, fruit, biscuits, bread, puffed rice – everything that is edible in the house.

Today was unusual because it seemed that there was an abnormal amount of teenage monkeys and they were extremely wild. They were bouncing off the roof, hitting windows, going from tree to tree, bumping into each other and jumping into the water basins for almost three hours. It was a completely wild scene!

The other day, one monkey stole Rinpoche’s underskirt that was hanging outside on the roof to dry. The monkey managed to wrap Rinpcohe’s underskirt around him, like a cape, and eventually over his head, causing him to freak out and fall out of the tree. When that happened, he went wild and ripped it in half. It now hangs in two pieces up in a tree.

Introducing Life on the Road with Lama Zopa Rinpoche

Welcome to this special new feature of the Mandala website, our first blog: Life on the Road with Lama Zopa Rinpoche.

FPMT’s CEO, Ven. Roger Kunsang, is on the road with Lama Zopa Rinpoche most of the year serving as Rinpoche’s tireless attendant, a post he’s kept since 1986. We at FPMT International Office keep up daily with Ven. Roger through email, Skype and phone. We are fortunate to receive many inspiring stories, updates and anecdotes from Ven. Roger as he accompanies Rinpoche around the world. Further, anyone fortunate enough to attend to Lama Zopa Rinpoche invariably emerges with amazing stories of a true bodhisattva in action.

And now, through this blog, we’ll be able to share these communications with you.

As Ven. Roger’s schedule and time are unpredictable, we can’t promise he’ll be posting regularly. But we can promise, when he does, you’ll be afforded a rare glimpse into the FPMT organization, as well as the daily life of our precious spiritual director, Lama Zopa Rinpoche. When Ven. Roger isn’t available, we’ll post stories from Rinpoche’s other attendants as well as little gems from Rinpoche’s house in California.

Thanks for reading and enjoy!