Read all posts in Ordained Sangha. 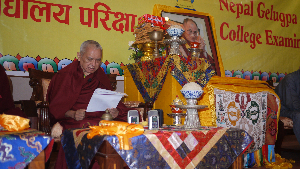 This year the special debate will be held at Kopan Monastery for fifteen days. There will be 450 monks attending from ten different Gelug 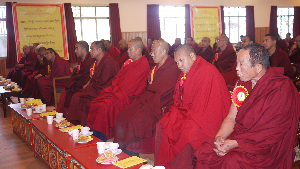 2010 Meeting of Geluk Committee in Nepal.monasteries in Nepal. These are the top debating students from each monastery. In addition this is the first time ever that nuns are participating in the special debate and there will be 90 nuns participating from two Gelug nunneries in Nepal, one of  them being Kopan’s own Khachoe Ghakyil Ling Nunnery.

This is the fifth year the special debate has been held in Nepal for the Gelug monasteries. Each year a different monastery hosts the actual debate.

For more information on the annual winter debate, its history, the texts debated and the overall incredible importance of the debate please read more here.

Please rejoice that we can make this offering and thank you to all the kind donors of the Lama Tsongkhapa Teachers Fund. The support given by FPMT’s Lama Tsongkhapa Teachers Fund ensures that the Mahayana teachings are preserved for the benefit of all sentient beings and is critical to FPMT’s mission of transmitting and preserving the Mahayana Buddhist teachings worldwide.

You don’t need to obsess over the attainment of future realizations. As long as you act in the present with as much understanding as you possibly can, you’ll realize everlasting peace in no time at all.