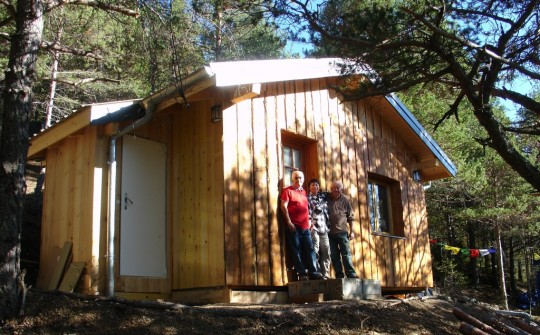 A kind benefactor has enabled the Supporting Ordained Sangha Fund to sponsor the building of a new IMI retreat cabin at Thakpa Kachoe Retreat Land, France.

Due to the kindness of a generous benefactor, the Supporting Ordained Sangha Fund was able to sponsor the International Mahayana Institute’s building of a retreat cabin specifically to be used by Sangha at Thakpa Kachoe Retreat Land.

This new cabin, named “Olka Cholung” after the place in Tibet where Lama Tsongkhapa did extensive retreat. It is run by Thakpa Kachoe and administered by IMI for IMI Sangha wishing to engage in medium-length and long retreats in Europe. 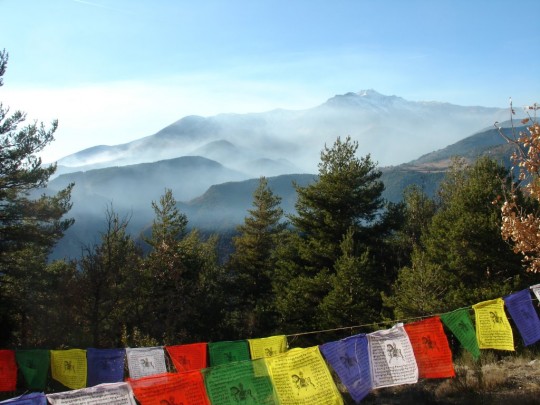 Beautiful surroundings at Thakpa Kachoe Retreat Land, where a new retreat cabin for IMI Sangha has been built.

Thakpa Kachoe has twenty-two acres of pasture and forest and is located in the amazingly scenic South Alps region at Guillaumes in the hamlet of Villetale; a 1.5 hour drive from Nice. The cabin is a single room cabin with kitchenette, shower and adjacent dry toilet.

Olka Cholung has welcomed its first occupant who has already started a fourteen month retreat. Having recently arrived there she mentioned how easy will be to meditate on dependent arising as well as the kindness of others while in retreat because the cabin “would not have been possible without all the people who support the project.” She continued saying,  “I call it a ‘five star retreat hut’ because it indeed has all the conducive conditions. The surrounding is amazingly beautiful, the valley is quite vast, giving a gorgeous open view. The air is clean and the water pristine. There is silence. The hut is within a forest, isolated from other buildings. All the materials used are the most eco-friendly possible. This is crucial for the environment and also for the people living in it. And last, but not least, the indispensable condition of having good caretakers.”

Please rejoice in the building of this cabin which will benefit FPMT Sangha for years to come.

You can learn more about the Supporting Ordained Sangha Fund and the ways it supports monks and nuns.