1,000 Tsa-Tsas of Lama Tsongkhapa Offered to Ganden Tripa Rinpoche to Offer to Others 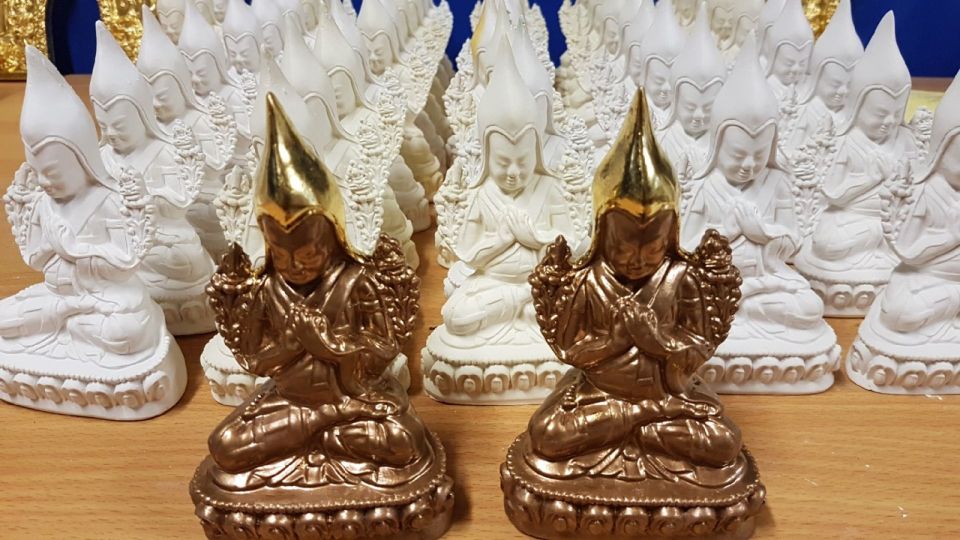 1,000 tsa-tsas of Lama Tsongkhapa when in progress at Chenrezig Institute’s art studio, Garden of Enlightenment. 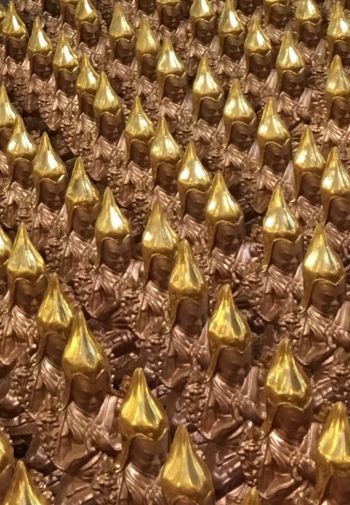 In 2018 the Executive Director of the Geluk International Foundation requested Lama Zopa Rinpoche to arrange the creation of 1,000 Lama Tsongkhapa tsa-tsas to be offered to Ganden Tripa Rinpoche to offer to others.

Rinpoche happily accepted this and due to the kindness of some sponsors was able to completely cover the cost of the materials, gold leafing, and shipping of the 1,000 small statues.

The Ganden Tripa or “throne-holder of Ganden” is the head of the Gelug school. Before passing away, Lama Tsongkhapa gave his robe and staff to the first Ganden Tripa to preside over Gaden Monastery which was originally founded by Tsongkhapa in 1409 in Tibet and destroyed in 1959, then re-established in Karnataka, India, in 1996 by the Tibetan population in exile.

Garrey Foulkes and the amazing volunteer artists at Chenrezig Institute’s, art studio, Garden of Enlightenment in Australia, took on this tremendous task over the last year. First they cast the 1,000 14-centimeter tsa tsas, repaired, rolled the required mantras, filled them, painted them, applied gold-leafing to the hats of each, and then packed and shipped them.

We really thank Garrey and all the volunteers for this incredible effort and offering.

Please rejoice in the creation of these 1,000 holy objects in celebration of the 600th anniversary of Lama Tsongkhapa’s parinirvana.

FPMT Education Services recently published a list compiled by Lama Zopa Rinpoche of various prayers authored by Lama Tsongkhapa or written in his honor to help students engage in this most auspicious celebration as meritoriously as possible.

Lama Zopa Rinpoche Bodhichitta Fund enables Rinpoche’s compassionate service to others to flourish. All the offerings from the fund are used toward the creation of holy objects and extensive offerings around the world; sponsoring young tulkus, high lamas and Sangha in India, Nepal, Tibet and the West; supporting FPMT centers, projects and services; sponsoring Dharma retreats and events; funding animal liberations and blessings, and many other worthy projects.

My religion is kindness to all