History in the Making: Supporting the Nepal Buddhist Federation 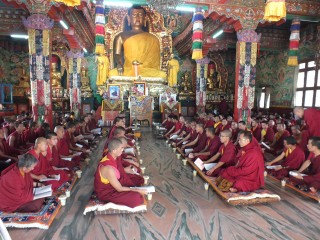 In 2006, for the first time in the history of the Nalanda Tradition, Nyingma, Kagyü, Sakya and Gelug traditions have formed an umbrella organization called Nepal Buddhist Federation (NBF). Since then, NBF has been engaging in many activities, including organizing the Rime Chirim Tendo Chenmo Monlam, a prayer festival for Saka Dawa dedicated to the healthy and long life of His Holiness the Dalai Lama, the heads of the four Tibetan Buddhist schools, all other great masters, as well as for world peace. 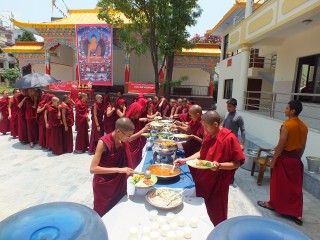 The Sangha enjoyed three meals together.

The festival, now in its sixth year and taking place at Tharlam Sasang Namgyal Ling Monastery, Bouddhanath, Nepal, is a great historic achievement and a sign of growing harmony within the four schools of the Tibetan Buddhism. Four hundred Sangha members were invited from each of the four schools. In addition to the pujas and prayers offered, breakfast, lunch and dinner was also offered to each Sangha member as well as a small offering.

Lama Zopa Rinpoche, through the Lama Tsongkhapa Teachers Fund, was happy to offer US$6,187 toward this year’s festival.

You are welcome to donate any amount to support this project which directly supports the teachings of Lama Tsongkhapa.