One of Lama Zopa Rinpoche’s Vast Visions for FPMT is for some FPMT centers to display huge thangkas and host festival days. 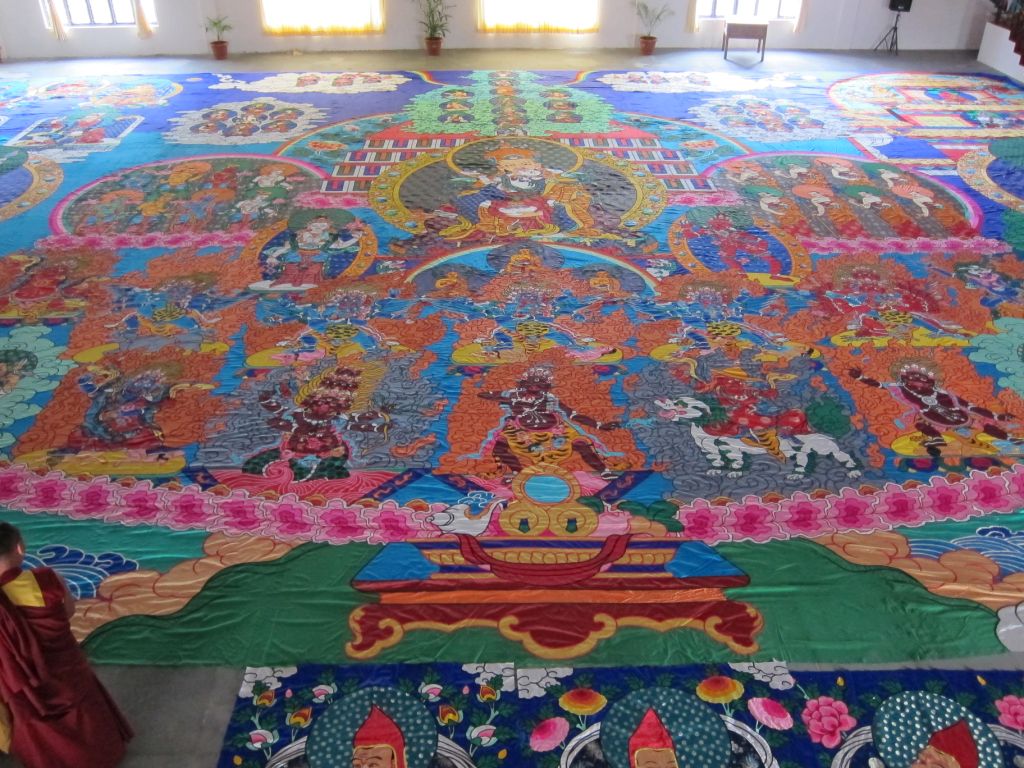 The beautiful appliquéd thangka of Guru Rinpoche. The thangka will be displayed during 1,000 Padmasambhava tsog offerings in India and Nepal and during special occasions. 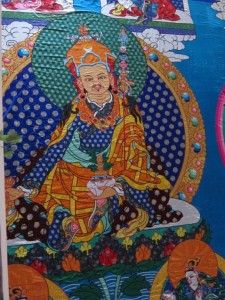 A close up of Guru Rinpoche as depicted in this large thangka.

In 2011 Lama Zopa Rinpoche through the Lama Zopa Rinpoche Bodhichitta Fund commissioned a 55 ft x 40 ft high stitched appliquéd thangka of Guru Rinpoche (Padmasambhava). The thangka will be displayed during 1,000 Padmasambhava tsog offerings in India and Nepal and during special occasions.The total cost of the thangka was US$75,000 and was fully sponsored by an incredibly kind benefactor.

In 2012 Rinpoche went to see the progress of the thangka which was quite incredible.

It was blessed by His Holiness the Dalai Lama during the Jangchup Lamrim 2013 teachings.

The following advice was given by Lama Zopa Rinpoche regarding specifics for this Vast Vision: 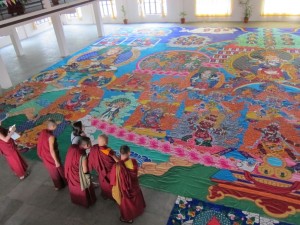 “During the festival day in the beginning the centers could give some introduction to Buddhism, then also to lead a deity puja (according to what thangka is being displayed). Then people can offer music, dances, etc., to the thangka (and also for everyone to enjoy). In this way many people make a connection to the deity and connect to Dharma.  Also many people who would not normally come to the centers will come: people with children, the elderly, neighbors.

“The idea is for many people to offer music to the Buddha, offer dancing, offer singing, etc. The main thing is making the offering to Buddha.  By offering to Buddha then it is something so meaningful, instead of just entertainment.

“The center could advertise the festival day widely and invite people outside the center.

“My wish is for the big centers in FPMT to have these large thangkas.   This is a way to leave imprints for all these people [who see them], for enlightenment.

“Then also to have tea, food, a little bit like a party. Can be a buffet, but to offer delicious food. Then people always remember that and for sure they will come next time.  They will ask, ‘When will it happen again?’

“The festival days can be within the first day or Losar or the 15th day of Losar (Day of Miracles). On that day the merit is multiplied, so therefore every offering and practice you do, any virtue you do, increases one hundred million times.  So if the festival is done on one of those days.

“This tradition comes from Tibet, where they would display a very, very large thangka on a mountainside, or on the wall once a year.