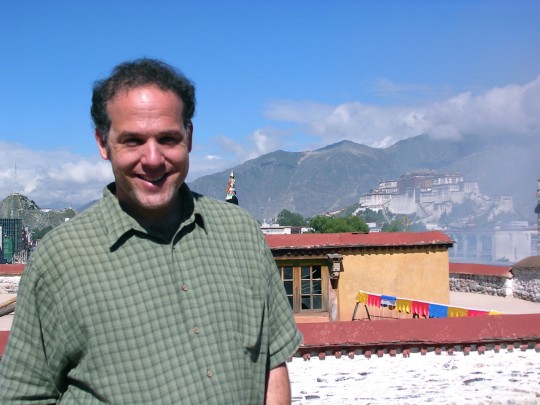 Jim Blumenthal on the Johkang with the Potala in the background, Lhasa, Tibet, 2004.

Mandala is mourning the loss of our dear friend Dr. James Blumenthal, who passed away very early in the morning of October 8, 2014, at age 47, due to complications from cancer. Jim was a regular contributor to Mandala for many years. He was also a talented and generous scholar, teacher and colleague, serving as a professor of Buddhist philosophy and history at Maitripa College as well as at Oregon State University in the United States. He was a student of Geshe Lhundub Sopa Rinpoche at the University of Wisconsin, where he received his PhD.

Jim was quick to say “yes” whenever we asked him for an article for Mandala and his submissions arrived on time and were beautifully written. He had great depth of knowledge and a sharp mind, yet was always humble and gracious. He had the wonderful ability to make the sometimes complicated and difficult-to-understand world of Buddhist philosophy accessible and fascinating to the not-so-academically inclined. His gentle kindness, clear explanations and always interesting stories will be profoundly missed.

Jim’s death is a great loss for Maitripa College, where he taught since its founding.  Jim is survived by his seven-year-old son Ben, wife Tiffany, parents Susan and Jack, brother Tom and Ben’s mother Sara, who was the former editor and publisher of Mandala.

As a small remembrance of Jim, we’ve upload several PDFs of his Mandala articles from archive issue, which you can find here.

Maitripa College has created a webpage for Jim with a collection of prayers that may be recited and dedicated for him. Also on the page, you will find Jim’s translation of Shatarakshita’s Ornament of the Middle Way, a link to a memorial page and a touching video remembrance of Jim by Ven. Thubten Chodron.

Oregon State University has published a moving tribute of Jim.

Mandala will run a full obituary in our next issue.

Mandala brings you news of Lama Zopa Rinpoche and of activities, teachings and events from over 160 FPMT centers, projects and services around the globe. If you like what you read on Mandala, consider becoming a Friend of FPMT, which supports our work.