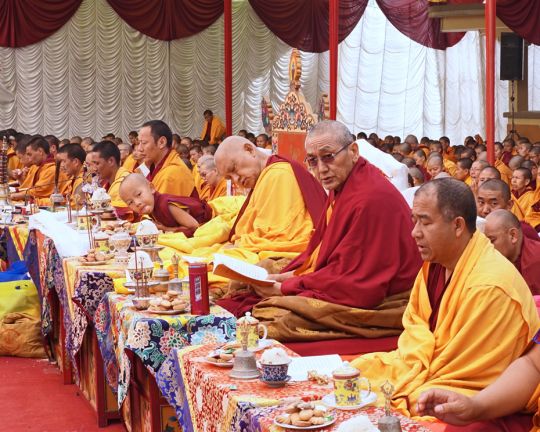 A new 15-minute video captures the sounds and scenes of a beautiful and auspicious 100,000 tsog offerings event for Guru Rinpoche done at Khachoe Ghakyil Ling, also called Kopan Nunnery, in December 2017. The Guru bumtsog took place in conjunction with the display of an enormous Guru Rinpoche (Padmasambhava) thangka. The new video shares detailed images of the thangka, extensive offerings, and puja.

This was the third year that the very large thangka was displayed at the nunnery with a Guru bumstog. The thangka, which is 75 feet (23 meters) high and 87 feet (27 meters) wide, hung from a large scaffolding and depicts in stitched appliqué the Padmasambhava merit field in the center.

Lama Zopa Rinpoche attended the event with Khen Rinpoche Geshe Chonyi, who is the current abbot of the nunnery, and the reincarnation of Trulshik Rinpoche. Losang Namgyal Rinpoche and Thubten Rigsel Rinpoche, the reincarnation of the former abbot Khensur Rinpoche Lama Lhundrup Rigsel, were also in attendance along with more than a thousand Kopan Sangha, local Tibetans and Sherpas, and foreign students.

FPMT.org brings you news of Lama Zopa Rinpoche and of activities, teachings and events from over 160 FPMT centers, projects and services around the globe. If you like what you read, consider becoming a Friend of FPMT, which supports our work.

You can see from your own life experiences how the environment can affect you. When you’re among peaceful, generous, happy people, you’re inclined to feel happy and peaceful yourself. When you’re among angry, aggressive people, you tend to become like them. The human mind is like a mirror. Therefore, it is very important to be conscious of your surroundings and how they affect your mind.