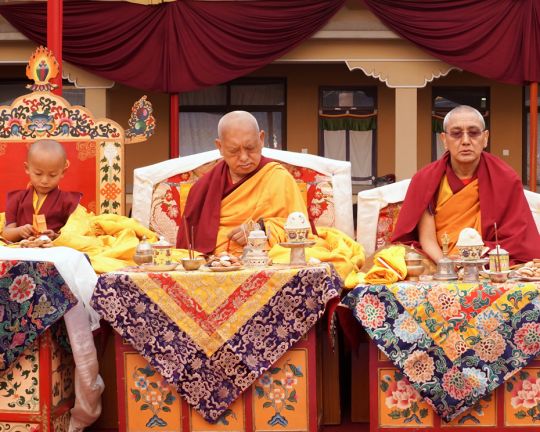 In December, Khachoe Ghakyil Ling in Nepal hosted a 100,000 tsog offerings for Guru Rinpoche in front of the gigantic Guru Rinpoche (Padmasambhava) thangka. Lama Zopa Rinpoche attended the special puja, known as a “Guru bumtsog,” along with the young incarnation of Trulshik Rinpoche, a great master in the Nyingma tradition, who is one of Lama Zopa Rinpoche’s gurus. 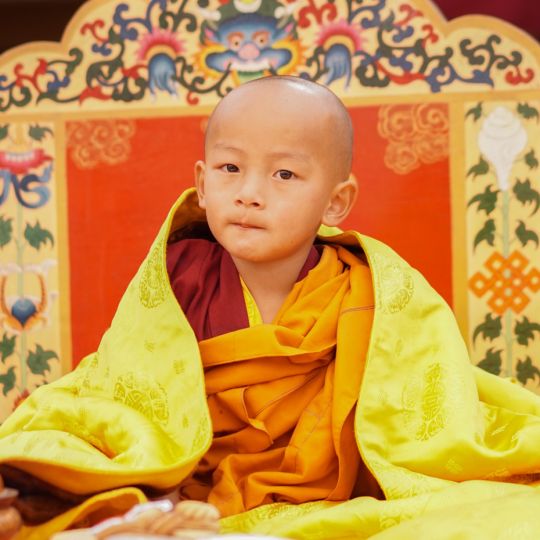 Also in attendance were Khen Rinpoche Geshe Chonyi, the abbot of Kopan Monastery and its sister nunnery Khachoe Ghakyil Ling; Losang Namgyal Rinpoche, a Kopan monk who is also a high lama for the Tamang people of Nepal; and Rigsel Rinpoche, the young incarnation of the past Kopan abbot Khensur Rinpoche Lama Lhundrup. About a thousand ordained Sangha were there as well as many lay students. 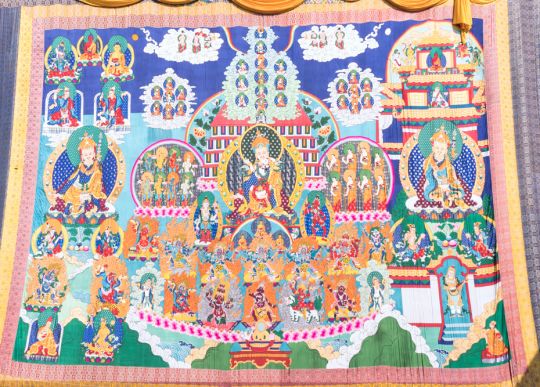 This is the third year that the enormous thangka has been displayed at the nunnery with a Guru bumtsog. The thangka, which is 75 feet (23 meters) high and 87 feet (27 meters) wide, hung from a large scaffolding and depicts in stitched appliqué the Padmasambhava merit field in the center. On one side are the eight aspects of Padmasambhava and the other displays Padmasambhava’s pure land.

Through the Lama Zopa Rinpoche Bodhichitta Fund, Rinpoche commissioned the thangka in 2011. It took two years to create and was completed in 2013. His Holiness the Dalai Lama blessed the thangka in late 2013, when it was displayed at Sera Je Monastery during the Jangchub Lamrim teachings. 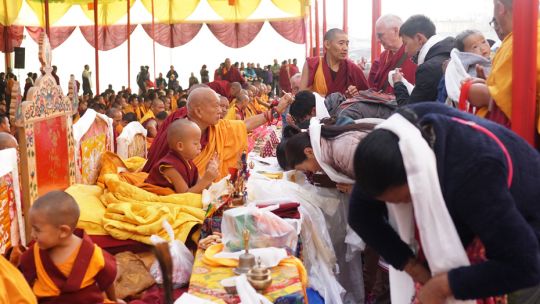 Khatas being offered after the Guru bumtsog in front of giant Guru Rinpoche thangka, with Rigsel Rinpoche, the reincarnation of Trulshik Rinpoche, and Lama Zopa Rinpoche, Nepal, Decmeber 2017. Photo by Ven. Lobsang Sherab.

One of Lama Zopa Rinpoche’s Vast Visions for FPMT is for centers to have large thangkas and organize festival days around their display. This year’s Guru bumtsog went very well and Rinpoche was very pleased with the event. 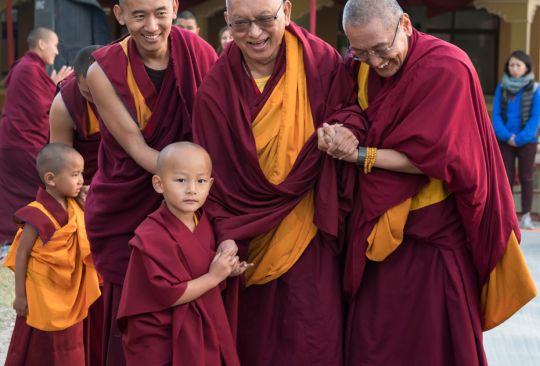