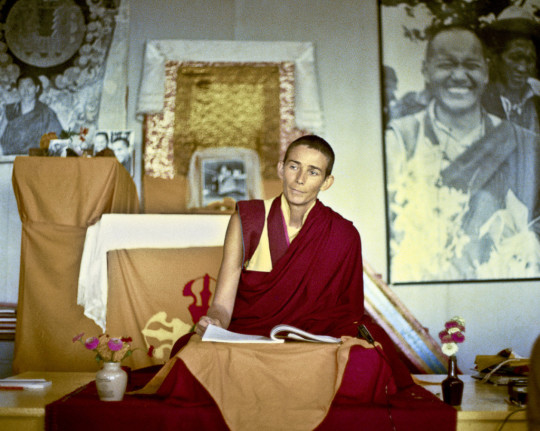 Ven. Ann McNeil, one of Lama Yeshe’s and Lama Zopa Rinpoche’s most senior Western students, passed away on Sunday, February 22, 2015, in British Columbia, Canada. Known as Anila Ann, she became a student of Lama Yeshe in 1970, when she met him in Kathmandu, Nepal. She ordained the same year, which you can read about in the post “Ann McNeil and Ordination,” on Lama Yeshe Wisdom Archive’s “Big Love” blog.

Anila Ann was the first director of Chenrezig Institute (CI), the first FPMT center, founded in 1974 in Eudlo, Queensland, Australia. Chenrezig Institute shared on their Facebook page that “it is due to [Anila Ann’s] kindness, and the kindness of Lama Yeshe and Lama Zopa Rinpoche, that we are here today. She lay the foundations for the flourishing, colorful Buddhist center that CI is today. We are incredibly grateful for all she did for us and the Dharma.” 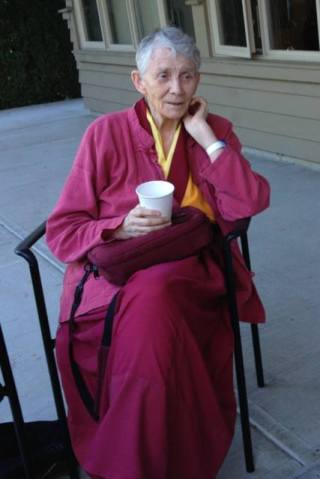 More recently, Anila Ann talked about her work as a Buddhist chaplain with prisoners in a 2011 interview with Mandala. “I loved teaching no matter the classification of the prison,” she said. “As far as teaching goes, it was very unusual to have the same students for less than four or five years. I’ve known most for 10 years and longer.”

“Let your happiness show,” she said in the same interview. “Look people in the eye with a big smile and say ‘Hello, hi, how are you?’ Be ready to assist anybody if they want it.”

Anila Ann was a true FPMT pioneer. (The Lama Yeshe Wisdom Archive has many photos of Anila Ann from the early days of FPMT.) She touched countless lives over her more than 40 years of serving her gurus, helping to spread the authentic Dharma in the West and leading the way for many students to come. She will be deeply missed.

We will run a full obituary for Anila Ann McNeil in our next print issue.

Mandala brings you news of Lama Zopa Rinpoche and of activities, teachings and events from nearly 160 FPMT centers, projects and services around the globe. If you like what you read on Mandala, consider becoming a Friend of FPMT, which supports our work.