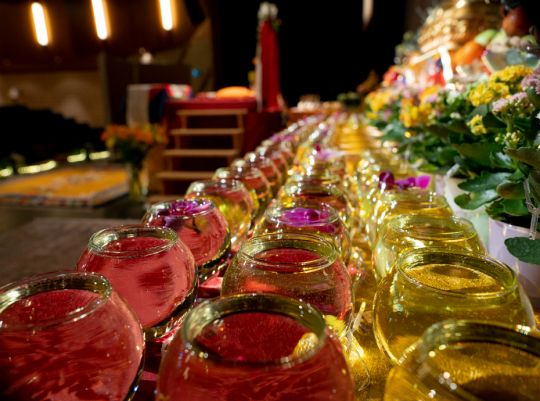 Water bowl offerings on the beautiful altar that was set up next to Lama Zopa Rinpoche’s throne during the teachings organized by Gendun Drupa Center, Martigny, Switzerland, November 2018. Photo by Harald Weichhart.

Lama Zopa Rinpoche wrote a group of sixteen retreatants who had completed 100,000 water bowl offerings together and offered their practice to Rinpoche. They asked if they could do preliminary practices in this way, doing the practices as group and counting what they had collectively done. Here’s Rinpoche’s response:

In Tibet this happened: there was a great lama in Amdo, I’ve forgotten his name, who went to the monastery to look for the text on Gyalwa Gyatso. Kirti Tsenshab Rinpoche advised of this. So this lama explained that in Tibet he put up a big tent and then many people made the water bowl offerings together. Then they offered them all together, so that means even though all the water bowls weren’t done by each person, the group counted them together. The lama used this technique in this way to finish them. Therefore, when you make an offering, you can offer even what has been offered by others.

I think similarly you can do this for light offerings. For example, even though many people have worked making the butter lamps and so forth, when you offer them you can offer them all and count them all. Like the water offerings, you can count all of them together. 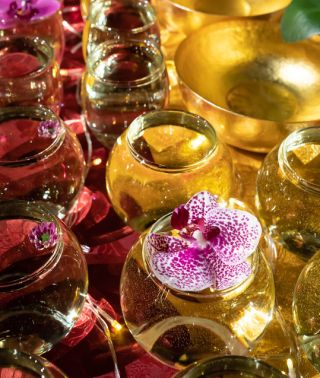 Water bowl offerings on the altar at the teachings with Lama Zopa Rinpoche in Martigny, Switzerland, November 2018. Photo by Harald Weichhart.

For more about water bowl offering, FPMT Education Services has created “The Preliminary Practice of Altar Set-up & Water Bowl Offerings” available from the FPMT Foundation Store as an ebook and PDF:
https://shop.fpmt.org/The-Preliminary-Practice-of-Altar-Set-up-Water-Bowl-Offerings-eBook_p_2577.html


Lama Zopa Rinpoche is the spiritual director of the Foundation for the Preservation of Mahayana Tradition (FPMT), a Tibetan Buddhist organization dedicated to the transmission of the Mahayana Buddhist tradition and values worldwide through teaching, meditation and community service.