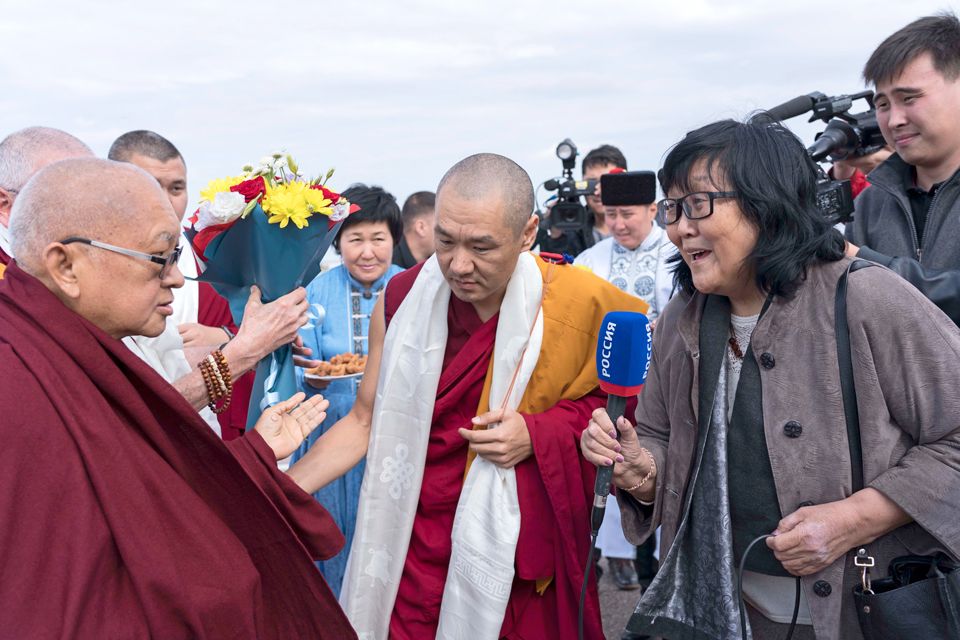 Lama Zopa Rinpoche arriving in Elista and being greeted by the abbot of the local monastery and the news media, Kalmykia, Russia, September 2019. Photo by Ven. Lobsang Sherab.

On September 30, Lama Zopa Rinpoche arrived in Elista, the capital city of the Russian Republic of Kalmykia. Rinpoche was enthusiastically greeted as soon as he stepped out of the airplane. Rinpoche was welcomed by the abbot of the monastery in Elista. Rinpoche was offered traditional khaptse and tea on the tarmac, where reporters and TV cameras were also waiting for him.

Inside the airport, Rinpoche answered questions in a press conference, discussing the significance of doing a 100 million mani retreat. Rinpoche told reporters that doing the retreat cleanses your mind of the attachment that is responsible for all the problems of this life and future lives. He said that the retreat brings “unbelievable benefits.”

Kalmykia is located in southern Russia and is bordered on one side by the Caspian Sea. It is the only Buddhist country in Europe, which allowed Rinpoche many opportunities to speak to news media about the importance of Buddhist practice. 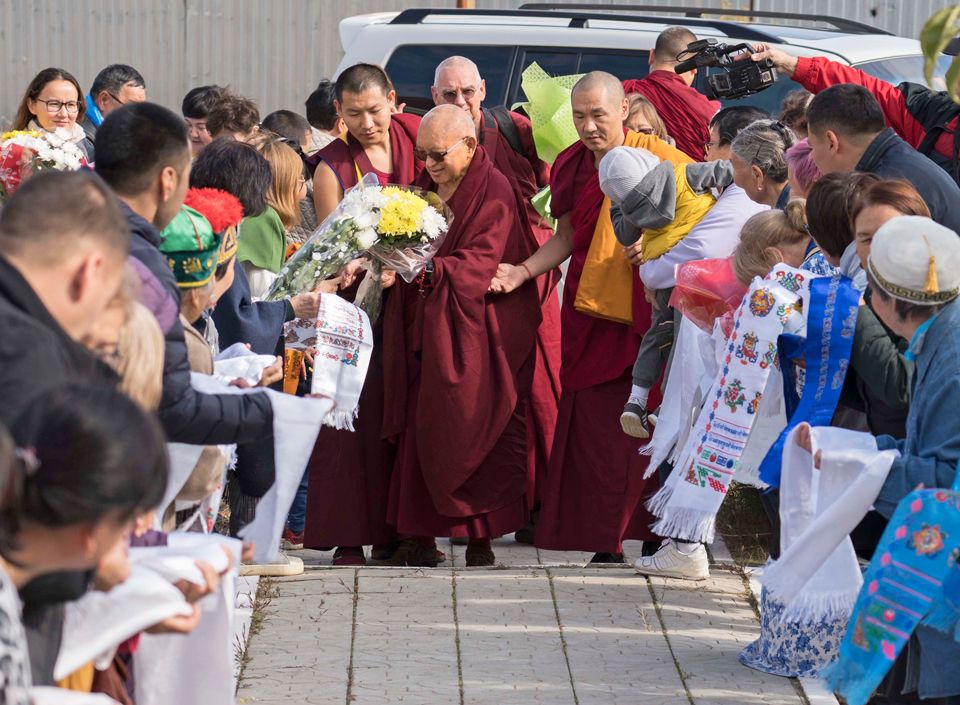 Lama Zopa Rinpoche received a warm welcome as he arrived at the house where he stayed in Elista, Kalmykia, Russia, September 2019. Photo by Ven. Losang Sherab.

A line of students offered khatas and recited Migtsema as Rinpoche arrived at the house where he was staying during his visit to Elista. 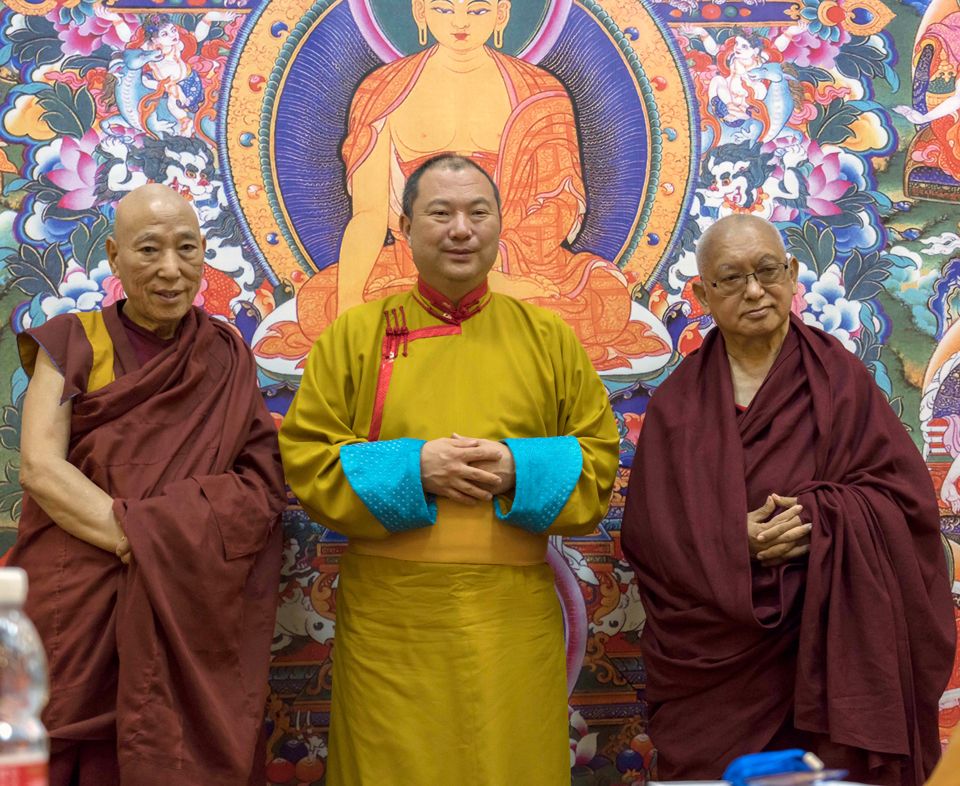 Telo Rinpoche is the spiritual leader of the Kalmyk people and helped organized Rinpoche’s visit and teachings in Elista. An American-born tulku, Telo Rinpoche has been active in the reestablishment of Buddhism in Kalmykia since being chosen as its head lama in 1992. He also serves as the honorary representative of His Holiness the Dalai Lama in Russia.

The night of Lama Zopa Rinpoche’s arrival, Telo Rinpoche offered a special dinner for Lama Zopa Rinpoche and for Lodoi Rinpoche, a high lama from the Russian Republic of Buryatia, another Buddhist area, located in Siberia. Lodoi Rinpoche had just concluded a series of practices and initiations in Elista. The elaborate dinner featured cultural singing and dancing. 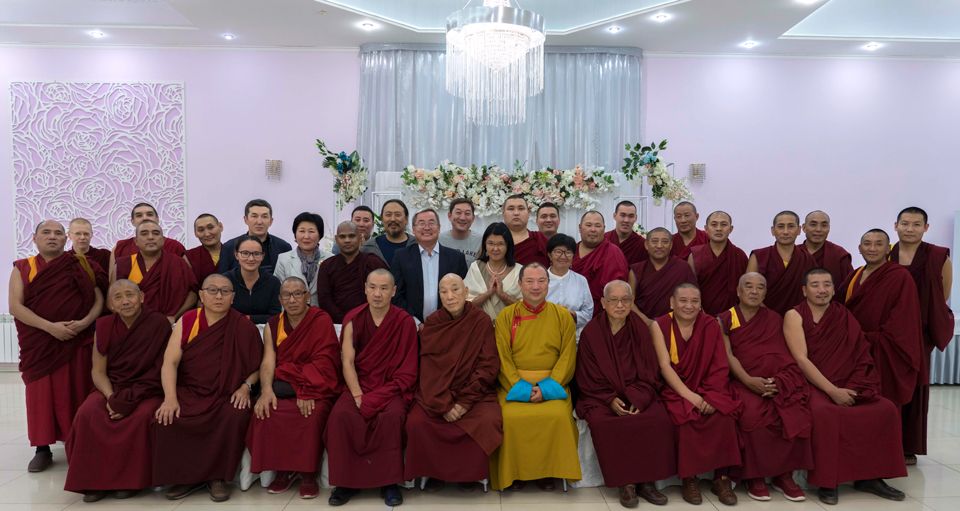 The following day Rinpoche did prayers with Telo Rinpoche, Lodoi Rinpoche, and the monastery monks at the Golden Abode of Buddha Shakyamuni or the Golden Temple. Built in 2005, it is the largest Buddhist temple in Europe. After lunch, the three rinpoches took part in another press conference, where Rinpoche spoke again on the importance of doing the 100 million mani retreat.

Lama Zopa Rinpoche offered the 1000-Armed Chenrezig initiation over three days, beginning on Friday, October 4, at the Golden Temple. A thousand people attended, packing the temple. In addition to local people, many students traveled from Moscow and Saint Petersburg to attend the events with Rinpoche. There were also a handful of students from France, Spain, and Malaysia attending. 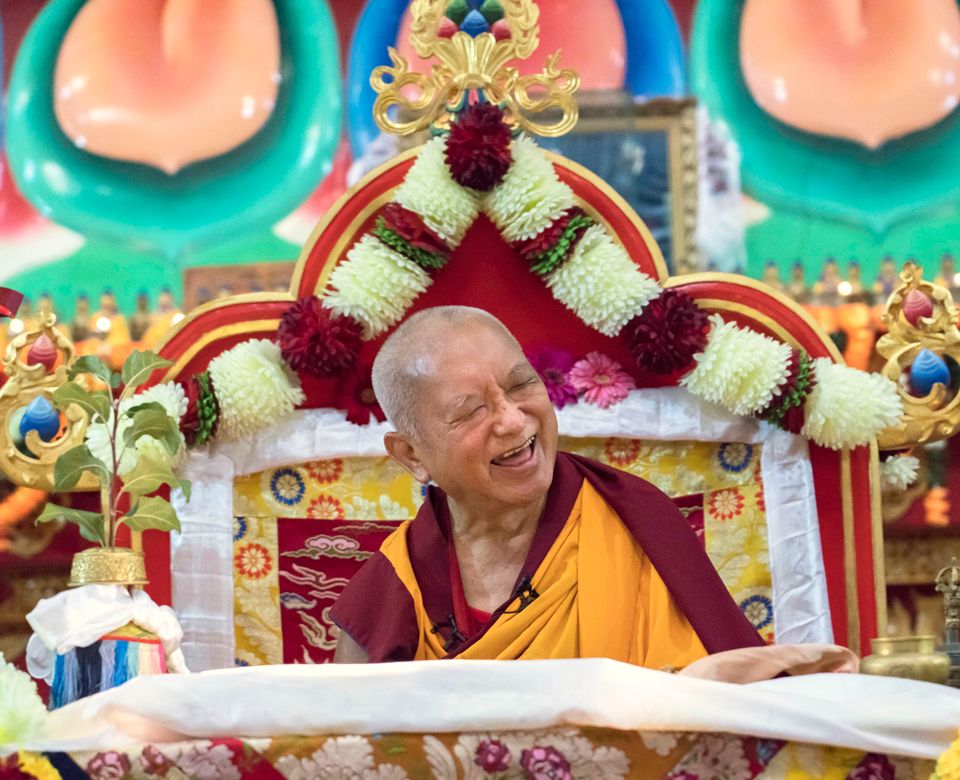 On the following Monday, between 200 to 300 students began doing the 100 million mani retreat. In addition, students from all over the world followed the retreat online.

The 100 million mani retreat is not a common practice in Kalmykia. It comes from the nyung në lineage. Rinpoche acknowledged that because the retreat is only two weeks long, ending on Friday, October 18, participants would probably not accumulate the full 100 million mani recitations. Rinpoche, however, said it was very good for students to learn how to do the practice for future retreats.

The retreat began every morning with a session blessing the speech and doing Lama Chopa. During the day there were sadhana recitation sessions. Geshe Tenzin Zopa led sessions and gave explanations on the practice to students. Lama Zopa Rinpoche taught during the final session of the day, covering topics such as guru devotion, bodhichitta and emptiness. Students attending the retreat appear very devoted and respectful, taking notes and carefully doing the practices. 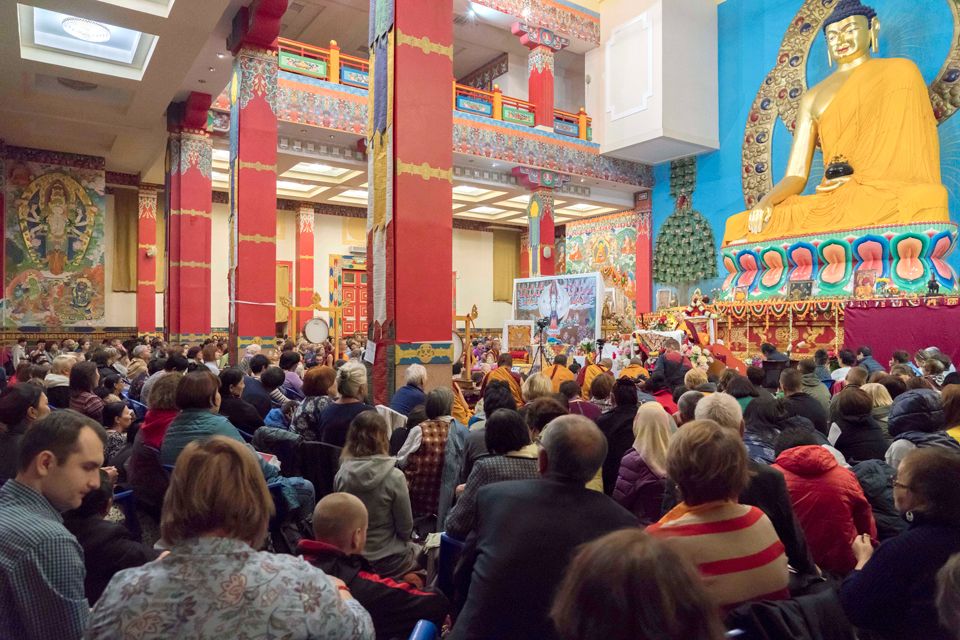 Rinpoche did an animal blessing on Saturday, October 19, in Elista and on Sunday visited a very large Maitreya statue located in the area. He then returns to Moscow to give teachings October 25-27 on “How to Develop Bodhicitta in the Modern World (a commentary on Khunu Lama Rinpoche’s The Jewel Lamp: A Praise of Bodhichitta).”

FPMT is grateful for the work of the retreat organizers, which include Telo Rinpoche and the monks from the Golden Temple. Students from Ganden Tendar Ling, the FPMT center in Moscow, also helped with arrangements.

Find video and audio recordings and transcripts of all of Rinpoche’s recent teachings:
https://fpmt.org/media/streaming/teachings-of-lama-zopa-rinpoche/