Posted in Lama Zopa Rinpoche News, Updates from Nepal After the Earthquake. 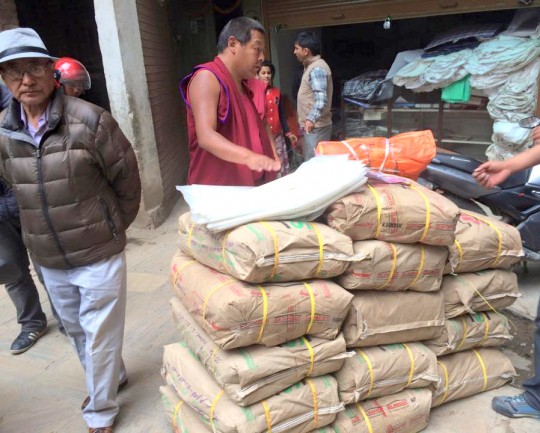 Sangey Sherpa, Lama Zopa Rinpoche’s brother and director of Lawudo Gompa and Retreat Centre, and Ven. Nyima Tashi with supplies that are being flown up to Thame, which is near Lawudo in the Solu Khumbu district, Kathmandu, Nepal, April 29, 2015 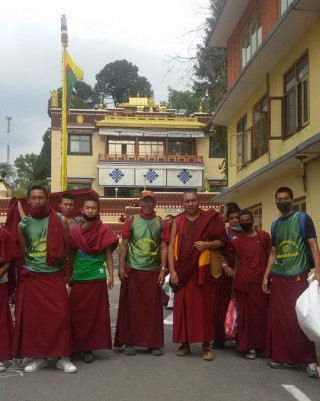 Emergency relief volunteers, some will be traveling to Thame with food and shelter for families there, Kopan Monastery, April 29, 2015. Photo by Tara Melwani.

So many people have been affected and many seriously. It’s an impossible job to help everyone at the same time.

The government with the support of many overseas and local organizations are prioritizing the worst-affected areas with what resources are available. One of the key issues is the remoteness and high altitude of many of the areas … and being cut off by landslides.

Rinpoche is focusing on Thame, his birthplace [near Lawudo Gompa in the Solu Khumbu district], and some of the other nearby areas to Lawudo, which is Rinpoche’s “local community,” so to speak.

In this area, there are about 100 families (our estimate so far, telephones are not working as yet, so communication is very difficult up there and still also hard in Kathmandu valley) who have lost their homes, and a few have been killed. They are living under plastic sheets huddled together as it is very cold and wet. There are still a few house standing, but people are too scared to go into them in case there is an aftershock. Food is running out.

Today we are organizing 100 food and shelter packages (basic food and a tent for each family). Each package is US$500, so a total of $50,000. This money is the first disbursement from FPMT’s Nepal Earthquake Support Fund.

Thank you for everyone’s support thus far. There is definitely more assistance required. So if you can help, it is greatly needed. And we are now able to directly offer immediate help.

We hope we can get a helicopter (all are commandeered by the government) to make several trips up to Thame, which is remote and at about 4,000 meters [13,100 feet]. This will help them get through the initial stage until, we hope, the bigger agencies and governments arrive with aid. 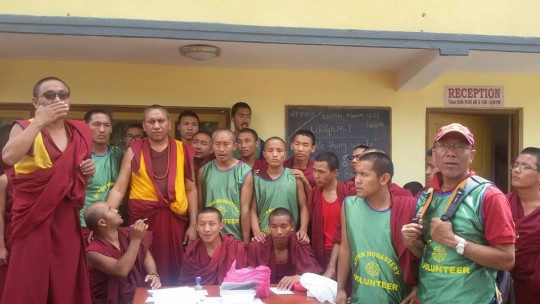 Most of the Kopan monks and nuns are now out helping in the affected areas, especially trying to get water and basic food to people. Some of the Westerners who are staying here are with them helping. The monks and nuns at Kopan are often from remote areas and some are trying to get back to help the older people. A lot of remote areas just have older people living there as the young come into Kathmandu to find work or go overseas for work. 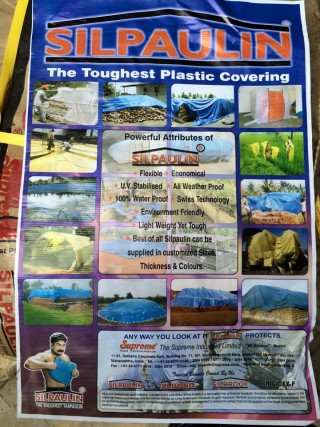 Some of the supplies going to Thame

There has been a lot of confusion and it’s very disorganized. That will improve. In the meantime, lives are lost and others are in need or hurt badly. Especially in difficult to reach mountainous regions, it’s really bad.

In the evenings Rinpoche with the Sangha are doing many prayers and pujas for those who have died and hurt as well as pujas to prevent further aftershocks.

One of the difficulties is getting people back to work. People are too scared to go into buildings in case there are more aftershocks. Shops don’t open and people can’t buy food and other necessities. Or the workers have left to help their families in outlying areas. Still soon they will be forced to open as people mostly live day to day. They have to work to buy food. Still many are living in tents in open areas.

People really got scared due to how violent the main two earthquakes were. Most people who died or were seriously hurt were killed or injured due to badly built buildings or very old buildings collapsing on them. I had a wall collapse on me while having a meeting. And I was lucky to receive just minor cuts and bruises, nothing really compared to many others.

Kopan Monastery and Nunnery have suffered a lot of damage. The engineers will come soon and let us know the extent and seriousness of the damage.

Today Rinpoche is moving back into the main monastery building. Hopefully that means no more serious aftershocks. And overhead there is the constant sound of helicopters shuttling back and forth with injured people or supplies. It’s constant as there are smaller light aircraft doing the same. 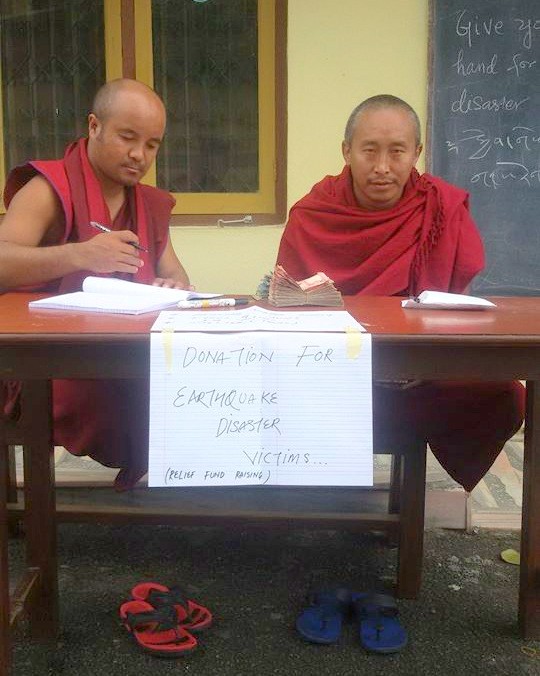 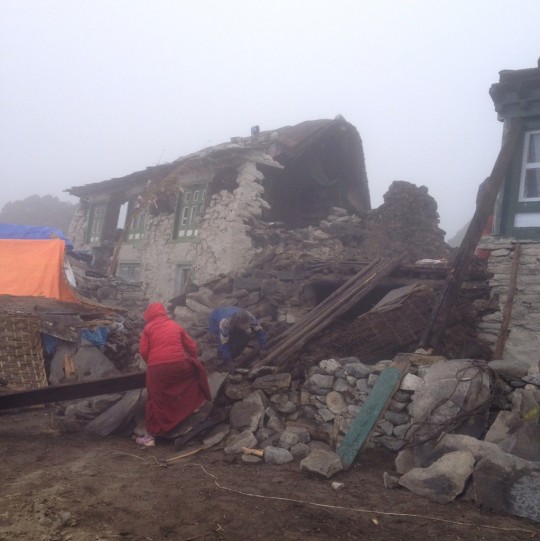 Jimmy Grant visited Thame not long after the earthquake. Here is his eyewitness account of the area, shared in an email to his father:

Yesterday [April 28, 2015], I went to visit Thame, in the hope of contacting you and spending some time at the lodge. I was absolutely heartbroken by what I saw and what’s worse is that Thame, from what I have seen, has yet to receive any assistance from anyone. I started talking to a young boy named Mingma, who took me to his house. You can see him in one of the pictures attached. I also met the little girl you can see in another picture near her home. The lodge is still standing, but has some serious damage. I wouldn’t stand inside of it, that’s for sure. Oh and Lama Zopa Rinpoche’s house is pretty well completely gone. 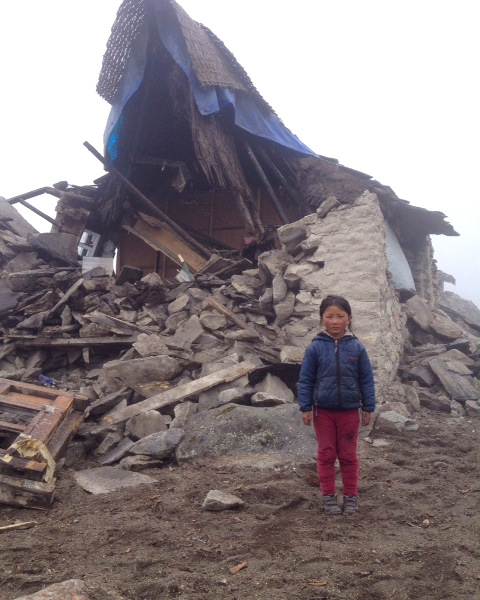 For the latest updates and news from Kopan Monastery and other FPMT centers and projects in Nepal affected by the earthquake, visit our “Updates from Nepal after the Earthquake” page:
https://fpmt.org/nepal-earthquake/

For “Prayers and Practice for Earthquake in Nepal,” see:
https://fpmt.org/edu-news/prayers-and-practices-for-earthquake-in-nepal/

You can receive an email daily digest of news from FPMT.org, including our updates from Nepal, by signing up at this address:
https://fpmt.us6.list-manage.com/subscribe?u=97e3ebb09472d09e0e699efd3&id=b248a1a45e