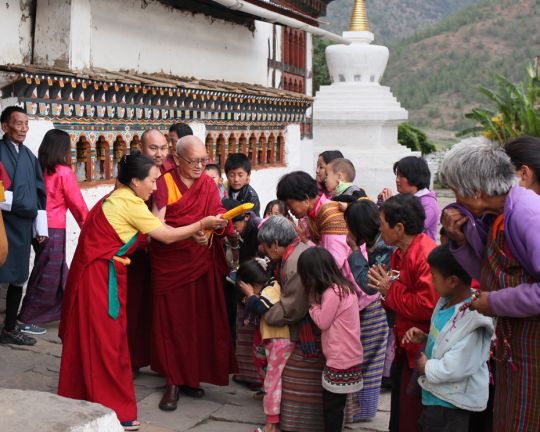 “My iPad contains the Kangyur, the Tengyur, many teachings. It is the same as a Dharma text. You can’t put it on the bed or down [low]. You have to respect it and put it higher,” Rinpoche explained in a short teaching on how to show proper respect for Dharma texts, including when they are in electronic form, during a session at the 2017 Light of the Path retreat.

Rinpoche emphasizes this point by talking about how Choden Rinpoche said that even one’s hand should go around, and not over, a Dharma text. Also objects such as a tea mug should not pass above a Dharma texts as it shows disrespect to the Rare Sublime Dharma.

Referring to the refuge part of lamrim teachings, Rinpoche stressed that it is very important to know the instructions on what is to be avoided and what to practice. If you are disrespecting Dharma texts, Rinpoche warns that it “pollutes the mind and obscures the mind. So by respecting [Dharma texts], then you create much good karma.”

Watch the teaching in this video clip “Proper Respect for Dharma Texts”:
https://youtu.be/aqUtQYAzKf4

Quoted text based on the unedited transcript for the 2017 Light for the Path retreat, which you can find here with video recordings of the complete teachings:
https://fpmt.org/media/streaming/teachings-of-lama-zopa-rinpoche/light-of-the-path-teachings-2017/