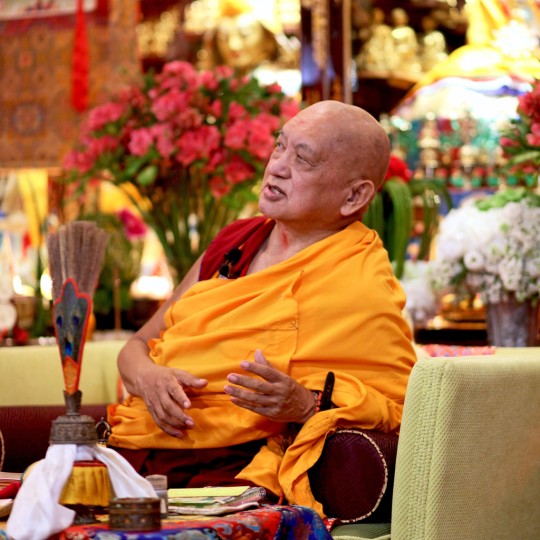 Work a Day for Rinpoche This Saka Dawa

Special Offers from the Foundation Store

New Advice to Protect from Earthquakes

Lama Zopa Rinpoche has requested that the Mahasiddhi Thang Thong Gyalpo’s protection be made available to all students living in areas threatened by earthquakes. Rinpoche recently added text to an image that should be displayed (i.e., posted on walls). The image is downloadable from the earthquake part of the Natural Disasters section of Lama Zopa Rinpoche’s Advice page.

It’s the Way You Think

The Main Way to Protect Yourself 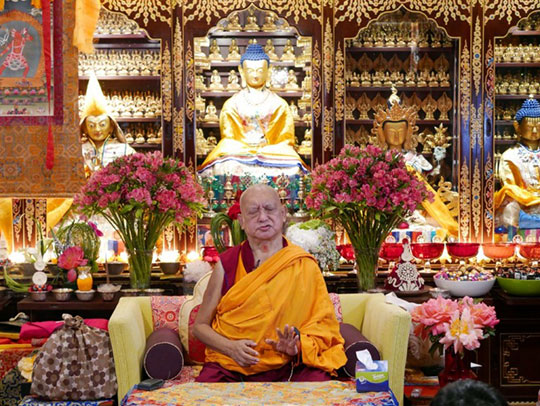 “Main way to protect yourself is for you to not harm others! It’s not sufficient to just study Dharma, you have to put it into practice!”

To help you prepare for these teachings, it would be ideal to do one or more modules of Living in the Path, an online program based on Lama Zopa Rinpoche’s Light of the Path teachings. Many of these modules have been recently revised to include guidelines for study, meditation, and practice, and are offered free of charge. Light of the Path Retreat 2016 is the fourth of the Light of the Path retreats.

Subscribe to our FPMT news blog to get updates as soon as they are announced. Enjoy livestreams of many of the teachings above and recordings of Rinpoche’s most recent teachings on Rinpoche Available Now! 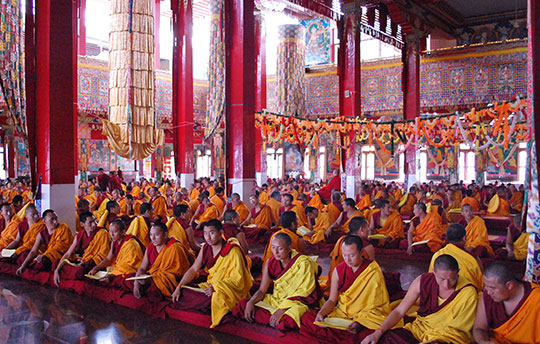 On Saka Dawa, taking place this year on May 21, an amazing 15,650 Sangha members will be offering prayers on behalf of the entire FPMT organization. Sangha members will recite the Prajñaparamita and “Praises to Tara” 100,000 times, offer pujas, present extensive offerings to Lama Zopa Rinpoche’s gurus, and offer robes to holy objects in India and gold to the Jowo statue in Tibet, among many other virtuous activities that have been advised by Lama Zopa Rinpoche.

All these pujas are covered by the FPMT Puja Fund, and anyone is welcome to participate in these incredible offering and prayers, which, according to the Vinaya text Treasure of Quotations and Logic, are multiplied in virtue by one hundred million times during Saka Dawa.

We’re working on the next issue of Mandala, July-December 2016. In it, we’ll explore Lama Yeshe’s broad vision of universal education with teachings from His Holiness the Dalai Lama, Lama Yeshe and Lama Zopa Rinpoche. We’ll hear from Geshe Thubten Jinpa, Professor Robert Thurman, Rasmus Hougaard, Jon Landaw and many others, and share how FPMT students are translating Dharma wisdom into programs appropriate for people of any religion.

Become a Friend of FPMT now and receive the next issue in your mailbox in July! Don’t miss it!

Work a Day for Rinpoche This Saka Dawa

The two-week Work a Day for Rinpoche campaign concludes on Saka Dawa, May 21. Each year the campaign raises support for Rinpoche’s vision and the work of International Office during this most auspicious time of year. Students “work a day” by offering a donation of a day’s work earnings, or any other amount, to support a host of FPMT activities. Join in here!

This advice is specifically for those offering service in the roles listed above.

“Lama Zopa Rinpoche first spoke about the LKPY concept in 1999 after seeing the Columbine High School massacre on the news. No one was talking about the more subtle causes of the massacre: the fact that these children hadn’t been taught the basic principles of loving-kindness or ‘the good heart.’ Without these basic qualities, disturbing and vicious acts, words and ideas develop. Lama Zopa Rinpoche has said that, ‘You teach young people loving-kindness, the result is peaceful youth. Since young people are the next generation, the big result is a peaceful world.’

The focus right now is on spreading the word that LKPY is back in action. After circulating this good news, steps will be taken to focus on specific projects including building a website. If you have any interest in assisting, please do not hesitate to get in touch with me.”

Special Offers from the Foundation Store

We would like to remind you that the Foundation Store offers all FPMT centers, projects and services a 40% discount on most education materials such as prayer and practice books, and a 20% discount on most meditation supplies, along with generous 60-90 day payment terms. Find more information …

Invite these holy objects and Dharma teachings into your centers today and take advantage of special offers valid until June 30:

Institut Vajra Yogini recently sent an invitation to Lama Zopa Rinpoche to come and teach at the center. In the invitation, director François Lecointre wrote:

“This year (2016) it has been 30 years that we have started the tradition of holding annual Vajrayogini retreats and in total we have held 32 retreats [in that period].”

When Lama Zopa Rinpoche read the invitation, Rinpoche was extremely pleased that Institut Vajra Yogini have done these 32 Vajrayogini retreats, and wanted to highlight this for other centers and all students to rejoice in, as it is so incredibly beneficial.

Rinpoche also commented that originally it was Lama Yeshe’s idea that each center would put some focus on the practice of the deity for which the center is named, so Institut Vajra Yogini is doing that very well.

Please check out the regularly updated meritorious opportunities to offer service as a volunteer or as paid staff in FPMT centers, projects and services around the world.

If you received this from someone else, or unformatted,
visit our subscribe page to receive this newsletter directly.