Rinpoche’s treatment continues here in France. The flight from Nepal was smooth, it took some days of rest after the flight to recover. The treatment is going well, especially with Khandro la’s assistance. We are hoping with 4 weeks of concentrated therapy Rinpoche will make some good improvement. The main focus is on the right arm and right leg.

While in Kopan Rinpoche did give some teachings to the monks and nuns. Rinpoche kept the teachings brief (for Rinpoche) … about 2 hours and this worked well, if it was longer Rinpoche’s speech started to get tired.

Thank you to everyone for all your support in many different ways, greatly appreciated.

Rejoice!  From his own side, Yang Teng Tulku has composed a prayer – Panacea of Pure Nectar – to offer to Lama Zopa Rinpoche. Yang Teng Tulku is a very knowledgeable young lama working in His Holiness the Dalai Lama’s Private Office assisting with Dharma texts and so on.

In the colophon Yang Teng Tulku explains why he composed the prayer:

“I wrote it with heartfelt sincerity reflecting on how just wonderful it would be if the illness of the incomparable Lama Zopa Rinpoche—who, having extensively preserved and continuing to sustain, serves to bring to fruit on the contemporary, non-sectarian teachings of the Buddha in general and in particular those of our spiritual father, Tsongkhapa—were quickly cleared away.”

Lama Zopa Rinpoche said that this prayer can be made available for students if they would like to read and recite it.

NB: this should not be confused with the long life prayer for Lama Zopa Rinpoche. 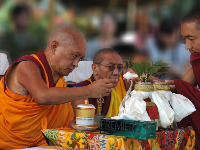 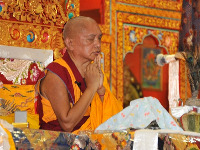 The Last Days on Earth 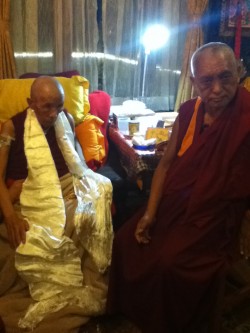 On September 5, Rinpoche leaned very close to Lama Lhundrup to better hear his voice, it was very soft, a very soft whisper. “Even the very smallest pleasure is in the nature of suffering,” said Lama Lhundrup. “If I have to go to the hell realms may I be able to take on all their suffering, may it ripen on me.”  The atmosphere was very, very still and calm. The conversation felt so intimate between too old close friends. There was no emotion, it was just a close and intimate exchange. END_OF_DOCUMENT_TOKEN_TO_BE_REPLACED

The Slaughter of Thousands of Animals 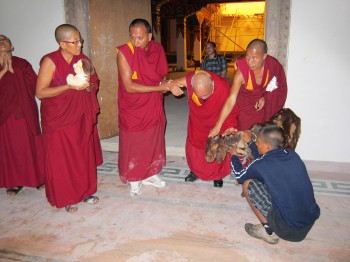 A goat is standing by a shop, tied on a very short leash. It is waiting to be killed by the butcher. I am not sure if it is aware it will be killed very soon. Rinpoche asks the jeep to stop as soon as he sees the goat. It is a nice looking, strong and young goat, brown colored with spots all over it. The negotiations start immediately with the shopkeeper. How much does he want for the goat? He discusses it with his friend in the shop and we settle on 8,500 rupees (about US$ 119), the cost of a cheap cell phone. The man explains that now they will get another goat because they have a commitment to get meat for the weekend. Rinpoche immediately starts negotiating for the second goat. I wonder to myself how long is this going to go on! We settle on the price for the second goat. Then we drive off to Kopan Nunnery and the two goats are brought there soon after. Rinpoche blesses both the goats. They look happy! END_OF_DOCUMENT_TOKEN_TO_BE_REPLACED

Rinpoche continues to progress steadily here in Nepal. Rinpoche’s doctors have advised to now increase the medication for blood pressure which was started today. The blood pressure has been much better than prior to the stoke but now the doctors aim to bring it 130/80 range.

Rinpoche’s sugar levels have also been much better and we will continue with Rinpoche taking insulin but the type of insulin is changing in order to have better control.

Rinpoche is continuing the chanting of Chod in particular (also other prayers out loud)  for exercising the speech. Depending on the weather … we get a lot of rain , Rinpoche does kora 3 or 4 times a week around Bouddhanath  and Swayambunath stupa (alternating). Sometimes it’s in the rain. Swayambunath kora at the base  is 3 kms. Rinpoche walks the whole way. At Bouddhanath  Rinpoche does 4 circumambulations walking and then another 6 in the wheel chair. This is one exercise Rinpoche really enjoys. We usually do it late at night, no one else is around so it is really a nice and peaceful time. If we get to the stupa early enough we go to “Flavors” for tea , great “little” place where some of the waiters and waitresses are small people … not more than 3 feet high.

Sincere thanks  to everyone for all your support in so many ways.

It was dark, maybe 9 p.m., and there was something wriggling on the path going around Bouddha Stupa. It was a baby jet black snake! We got it onto an open piece of cardboard with a little difficulty. Rinpoche wanted it to come with us around the stupa. Rinpoche gave it the name, “Thubten Tharpkye.” For the next 10 circumambulations of the stupa (he /she) got some really good karma. At the end, after dedications (ending around midnight — almost no one is around at that time), we had to say good bye to Thubten Tharpkye. We placed him safely in the drainage system from where he must have come and will spend the rest of his life.

A few days later we were circumambulating Swayambhu Stupa around the base where there are so many stupas, some are very large. It is quite amazing. We usually go after dark when it is quieter and people have finished doing kora. But we walk on the road and so you have to be really careful of the Nepali cars and trucks racing along with horns blaring. Rinpoche walks slow and you have to take care to balance him as the road has holes and cars and trucks try to  pass as close as they can to you. Sometimes you have to move quickly out of their way! We do one circumambulation (3 km). The last time this took nearly four hours with the stops to make offerings and prayers. We always stop at the large (about 20 ft high), very beautiful Guru Rinpoche statue and Rinpoche chants prayers.

One night Rinpoche was just finishing prayers to Guru Rinpoche when there were sounds from the dark behind us. They say there are a lot thieves and drunks around after it gets dark. I looked around and could see someone lying on the ground in the dark and moving. It sounded like a woman but the noise coming from her was strange and not words that could be understood. Then to her left was a man in rags looking in really bad shape, really out of it. The old woman started to come towards us wailing strangely, the man was keeping his distance. Rinpoche asked me to offer them 100 rupees each. I only had 50 rupees (in change) for each and gave that. Then Rinpoche, in a very gentle ceremonious way, offered to each of them long beautiful khatas. To the man he offered a long blue khata and to the woman he offered a long green one. Then Rinpoche offered a long red one to the Guru Rinpoche statue. We then moved on slowly to complete the kora.

Now it is nearly 4 months since Rinpoche had a stroke, we are doing our best in changing circumstances to keep the discipline of physio and physical exercises going as well as medication for the control of the diabetes and blood pressure. In terms of Rinpoche’s progress it is slow but continues to be positive. There is more use of the right arm and leg, the arm is taking longer but according to doctors this is expected. The speech seems to be improving slowly also and Rinpoche uses chanting prayers as the exercise for the mouth rather than what the speech therapist normally gives. The difficult and complicated chanting takes quite a bit of effort but seems to be working … and of course much more inspiring (to Rinpoche) than the normal phrases.

We have had a new leg brace made which allows Rinpoche better leg movement when walking, so now we use part of the high quality brace made in Australia (A$2,000) with the brace made here (3,200 rs … about $35 dollars) and it seems we have a good arrangement for the next phase of development in helping the right leg. The right arm and hand is more complicated and depends a lot on Rinpoche using it as much as he can … to retrain it, so if you get something signed by Rinpoche and you can’t read it… then you know it has been signed by Rinpoche.

Thank you to everyone for all your understanding and support in so many ways, 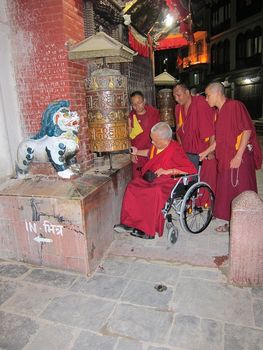 Rinpoche is doing well with his recovery. Now the main emphasis is on keeping a strict daily discipline of exercise, massage  specializing in clearing the blockages for helping to restore normal use of the right side) and physio work. The discipline in the past has been interrupted here for various reasons … now we need to be even more strict as we have been warned that the optimum time for restoring Rinpoche’s physical condition to normal is quickly passing … the next few months are critical.

Rinpoche has a full day of exercise etc. starting with the physio coming at 7.45 am … there are some breaks through the day for Rinpoche to do prayers etc. … then in the evening Rinpoche does korwa at either Swoyambhu or Bodha stupa… Rinpoche believes this is one of the best activities for purification as well as physical exercise, of course it gets interrupted sometimes due rain … monsoon, still sometimes Rinpoche does korwa in the rain.

Our request to those who would like to visit Rinpoche is … please not in the next few months, of course if it was just 1 or 2 visits it would be fine but many would like to visit and then the schedule goes out the window as Rinpoche will not say no… he very much focuses on others.

Thank you very kindly to everyone for your understanding,

Osel arrived at Kopan on Monday morning to see Lama Lhundrup and stayed one week. It had been 12 years since Osel was last at Kopan. Osel recognized a lot of the older monks immediately and there was a really good connection. It didn’t seem to matter in the least that he was now a lay person and dressed cool!

Osel is on the floor, flat on his back beside my desk, thinking about Rinpoche’s request to give a talk to all the Kopan monks and wearing a chuba (Rinpoche had one made for him). He says he doesn’t like to be pushed or pressured into doing things but it seems he is in the process of coming to terms with Rinpoche’s request although it appears hard. In the end he does give the talk. All the monks are present as well as Lama Lhundrup (a huge effort to come to this, his cancer is quite advanced) and Rinpoche. Rinpoche gave a short talk  first, and then asked Osel to speak. Osel gave the talk in Tibetan (very good Tibetan). He gave “modern” advice and the monks gave a very warm response. They seem to want more! Osel said he was more than happy with his visit to Kopan. It was, “More than perfect,” he said!

It was an inspiring visit and made a lot of people happy.