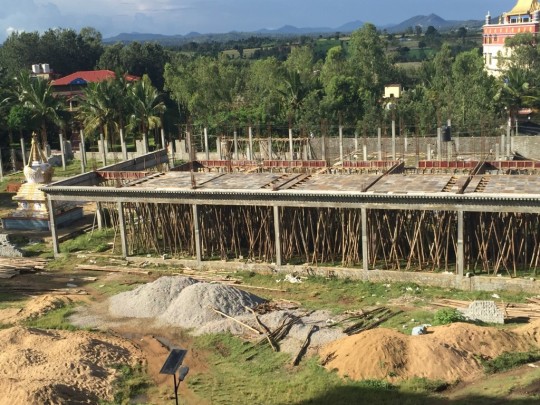 Progress is being made on the new debate courtyard at Sera Mey Monastery. A grant from the Supporting Ordained Sangha Fund was given to support this work.

In September we reported that a grant from the Supporting Ordained Sangha Fund was offered to Sera Mey Monastery, Mysore, India, toward the construction of a new debate courtyard. The old debate courtyard posed problems such as echoing, exposure to rain, hot sun, no classrooms or science lab rooms, among other issues. Approximately 2,000 monks study at Sera Mey, the presence of a proper area for debate at the monastery was a necessity.

The building of this new courtyard has commenced and progress is underway. 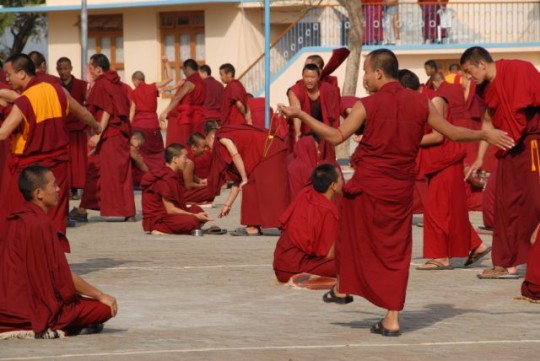 The tradition of debate in Tibetan Buddhism can be traced back to Lama Tsongkhapa, where the best scholars gather to hone their understanding of the Buddha’s highest teachings. With logical reasoning as the governing rule, students practice the art of debate by questioning one another.

The monks offered extensive offerings and prayers from The Victorious Wish-Fulfilling Jewel, the sutra-based ritual of Medicine Buddha. They offered prayers for one week and dedicated especially for the long life of Lama Zopa Rinpoche and all FPMT members and benefactors.

The FPMT Puja Fund also sponsors a monthly Medicine Buddha puja at Sera Mey by the monks. This has been offered every month since the establishment of the Puja Fund, twenty years ago. Medicine Buddha puja is so important  for the overall success of the organization and all Dharma activities and is dedicated to all FPMT students and benefactors, including those who have died.

Please rejoice in the building of this new debate courtyard and in all of the beneficial prayers and activities happening at Sera Mey Monastery for the benefit of FPMT.

You can learn more about the activities of the Supporting Ordained Sangha Fund and the FPMT Puja Fund or check out an overview of all of FPMT’s Charitable Projects.

Your whole life is controlled by karma, you live within the energy field of karma. Your energy interacts with another energy, then another, and another. That’s how your entire life unfolds. Physically, mentally, it’s all karma.