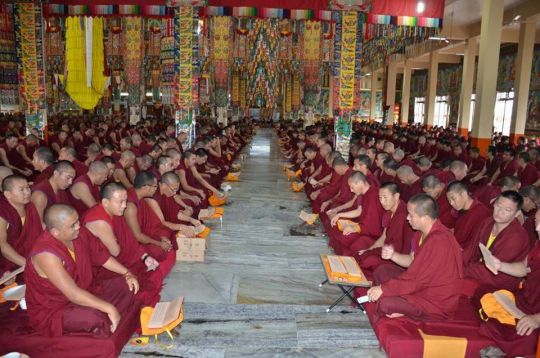 Every year on Lhabab Duchen (Buddha’s Descent from Tushita) the Puja Fund sponsors prayers, pujas, offerings to Sangha  all over the world, as well as offerings to holy objects in India, Nepal, and Tibet. This year, Lhabab Duchen, one of the four great holy days of the Tibetan calendar, takes place on Sunday, November 20.

Lhabab Duchen celebrates when Lord Buddha actually descended from the God Realm of Thirty-three after teaching his mother and the gods living there Dharma for several months. As a Buddha Multiplying Day, karmic results of actions on this day are multiplied 100 million times. This amazing result is sourced by Lama Zopa Rinpoche to the vinaya text Treasure of Quotations and Logic. 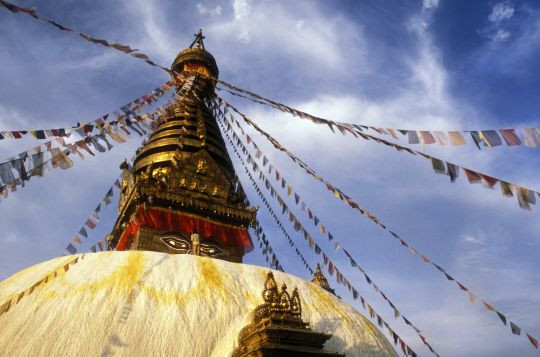 On holy days, offerings are made to holy objects in India, Nepal, and Tibet including the Swayambunath Stupa in Nepal.

These activities are advised by Lama Zopa Rinpoche and dedicated to the long life of His Holiness the Dalai Lama, and to the success of all the FPMT centers, projects, services, students, benefactors and those serving the organization in any way, as well as all beings. 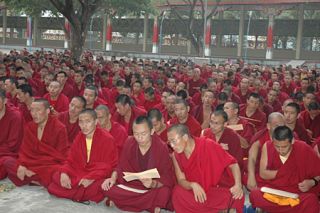 Incredibly, 15,600 ordained Sangha join in for these practices over a 24 hour period. Lama Zopa Rinpoche has explained that the karma of group practice is more powerful than individual practice. “The karma of one ordained Sangha reciting a sutra in a temple or room alone, compared to reciting a sutra with all the assembly of Sangha present, the latter one—reciting a sutra with all the Sangha—is much more powerful….The more people there are supporting the practice, the more powerful it becomes…. When the karma is more powerful, the result comes more quickly.” It is amazing to consider the power of 15,600 monks engaging in group practice on a holy day when the karma is already multiplied. Additionally, as they are dedicating to His Holiness and FPMT in this way… the benefit is almost unimaginable!  As Rinpoche reminds us, “Sangha are living in a high number of vows and are unbelievably powerful objects.”

These activities offered cost approximately US$8,000 on each holy day. All are welcome to join in the merit of these prayers, practices, and offerings by contributing to the Puja Fund.

You can read more about the individual activities sponsored on Lhabab Duchen and please rejoice in the massive merit generated by 15,600 Sangha on this holy multiplying day.

If you would like to make a donation toward the meritorious activities being sponsored by the Puja Fund on Chokor Duchen, you can do so by offering any amount you are able.

The Puja Fund was established by Lama Zopa Rinpoche to provide resources for continuous pujas dedicated to the long life of His Holiness the Dalai Lama and to the success of all the FPMT centers, projects, services, students, benefactors and those serving the organization in any way. You can learn more about the Puja Fund, or FPMT’s other extensive charitable activity.