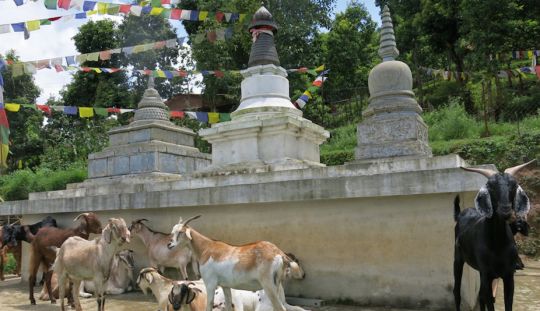 Every day around the world millions of animals are killed and mistreated needlessly. In countries like Nepal, the care and management of animals is very poor and animal sacrifices are common creating tremendous suffering for the animals and those involved.

Animal Liberation Sanctuary, near Kopan Monastery, was established to provide shelter and care for animals who have been rescued from being killed, so that they may live out their natural lives in peace and attain a higher rebirth through exposure to the Dharma. The animals (nine cattle, fifty goats, and one sheep) regularly hear mantras and are led around holy objects.

For the sixth year, a very kind benefactor has worked with the Social Services Fund to issue a substantial grant for the ongoing work and care of the sanctuary. We are delighted to report that a US$10,000 grant has recently been issued which will be used for ongoing food and care expenses, as well as for urgently needed bars over the windows of the goat shed. In 2016 one of the dogs was taken by a leopard during the night and in 2017 a female goat was taken in broad daylight by a leopard with two cubs. The staff were too late to chase the leopard away and the goat was killed. Unfortunately habitat loss has forced leopards closer to the urban fringe. The window bars will hopefully make the shed secure at night and vigilance from the caretakers will prevent future attacks during the day.

The sanctuary was highlighted during the December 2017 Asia for Animals
conference and many delegates were given tours of the sanctuary and were impressed
with the set up and the condition and care of the animals.
Please rejoice in another year of support being offered to this wonderful project which benefits animals so in need of support, care, and kindness.

You can donate to the Animal Liberation Sanctuary or learn more about the work being done for animals in Nepal: http://kopanmonastery.com/charitable/animal-sanctuary-nepal

The Animal Liberation Fund supports weekly animal liberations and extensive dedications offered by Sangha at the residences of Lama Zopa Rinpoche. When funds allow, additional animal liberations conducted in Singapore and Hong Kong are supported, as well the Animal Liberation Sanctuary in Nepal, MAITRI Charitable Trust in India and elsewhere. You are welcome to offer any amount toward this ongoing work.

We often feel miserable and our world seems upside-down because we believe that external things will work out exactly as we plan and expect them to.