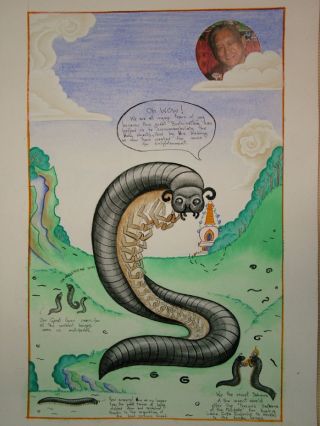 In this drawing, a grateful millipede is saying: “Oh wow! We are all crying tears of joy because this great bodhisattva has helped us to circumambulate holy objects, and by his blessing we now have created the cause for enlightenment.”

The Sangha living at Lama Zopa Rinpoche’s residences in California and Washington State offer the practice of animal liberation every week (the Winter months in Washington State are not conducive to this practice due to the snow being too much for the animals), dedicated to anyone who is sick, dying, or having life obstacles and extensive prayers are made for the long life of His Holiness the Dalai Lama and Lama Zopa Rinpoche. Since 2015, 602,950 small sentient beings, including worms, were blessed and liberated according to Rinpoche’s instructions. Over 60,000 were liberated in 2017. Not only were the animals saved from untimely death, they were also taken around an incredible amount of holy objects, mantras were recited and blown on them, and they were carefully placed where they could live out the rest of their life. 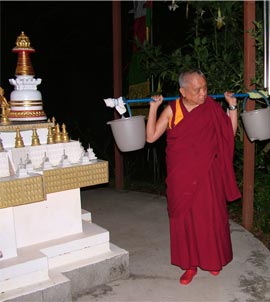 Lama Zopa Rinpoche carrying his “fathers and mothers” around the stupa at Aptos House, California in 2006.

On one occasion, while Lama Zopa Rinpoche was circumambulating worms around the large stupa at Aptos House in California, he located a broom to be able to carry two buckets of worms on each shoulder. Rinpoche explained, “In India when one’s parents are too old to walk then their children carry them on their back in this way. Father on one side in a basket and mother on the other side in a basket. So here I am carrying 400 of my fathers and mothers on my back.”

The Sangha in California also offer a weekly blessing of all sentient beings in the ocean by submerging large Namgyälma mantra boards into the water; and the Sangha in Washington offer charity and food to nineteen ant nests and regularly bless beings in nearby lakes with mantras and blessed food.

Animal liberation practice is an incredible practice for anyone who has illnesses or is experiencing life obstacles. FPMT Education Services makes available many resources for those wishing to engage in this practice. Additionally, anyone who donates to the Animal Liberation Fund is directly contributing to helping save animals from the lower realms.

Please rejoice in this ongoing practice of animal liberation which is dedicated to all beings, and specifically to those requesting prayers.

All are welcome to contribute to the Animal Liberation Fund to help ensure that our work sponsoring animal liberations around the world continues.

If you help others with sincere motivation and sincere concern, that will bring you more fortune, more friends, more smiles, and more success. If you forget about others’ rights and neglect others’ welfare, ultimately you will be very lonely.